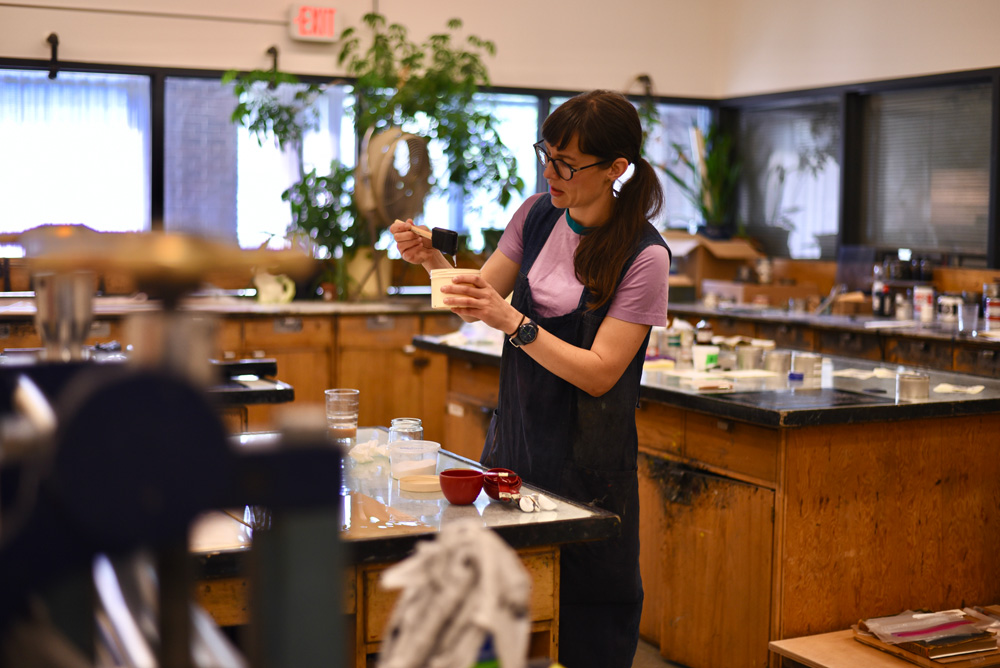 At the beginning of 2021, Latitudes ran an idea past long-time collaborator and Master Printer Jillian Ross to create new limited edition prints with emerging artists, Cinthia Sifa Mulanga and Puleng Mongale. “I was awake all night thinking about it,” Jillian says. The collaboration that ensued was a year in the making, traversed time zones, racked up hours of video calls and hundreds of text messages, and saw various stages of the artworks shipped back and forth between South Africa and Canada multiple times. After months of collaboration and dedication to the finest details, the new fine art prints go live in 2022.

Puleng’s print Grounded was created using photogravure etching: a time-consuming, many-step process to create an intaglio plate from (in this case) a digital image. Photogravure’s depth of etch creates a unique tonal range that brings an unparalleled richness to the final image. Cinthia’s print Ne lave pas ton visage was made using direct gravure for which she drew and painted directly onto photographic film with charcoal, HB pencil and India Ink which was then transferred onto a copper plate and etched. “The technical aspects perfectly suited both Puleng’s and Cinthia’s work,” Jillian says. Puleng’s digital photograph received an elevated textural quality and direct gravure allowed Cinthia to transfer her beautiful mark-making in seductive, subtle inks and pencils. 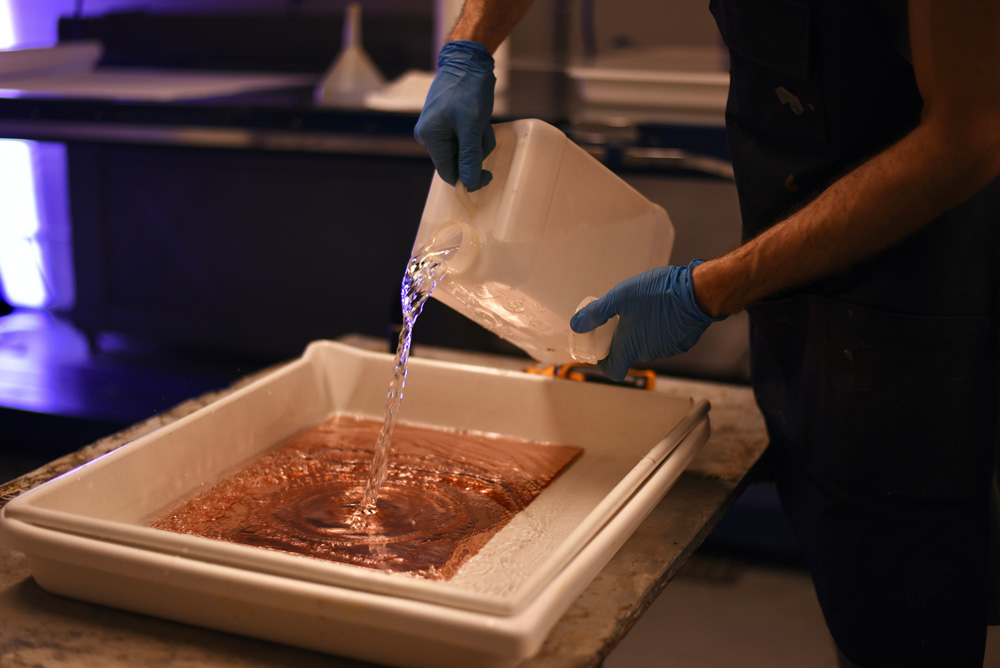 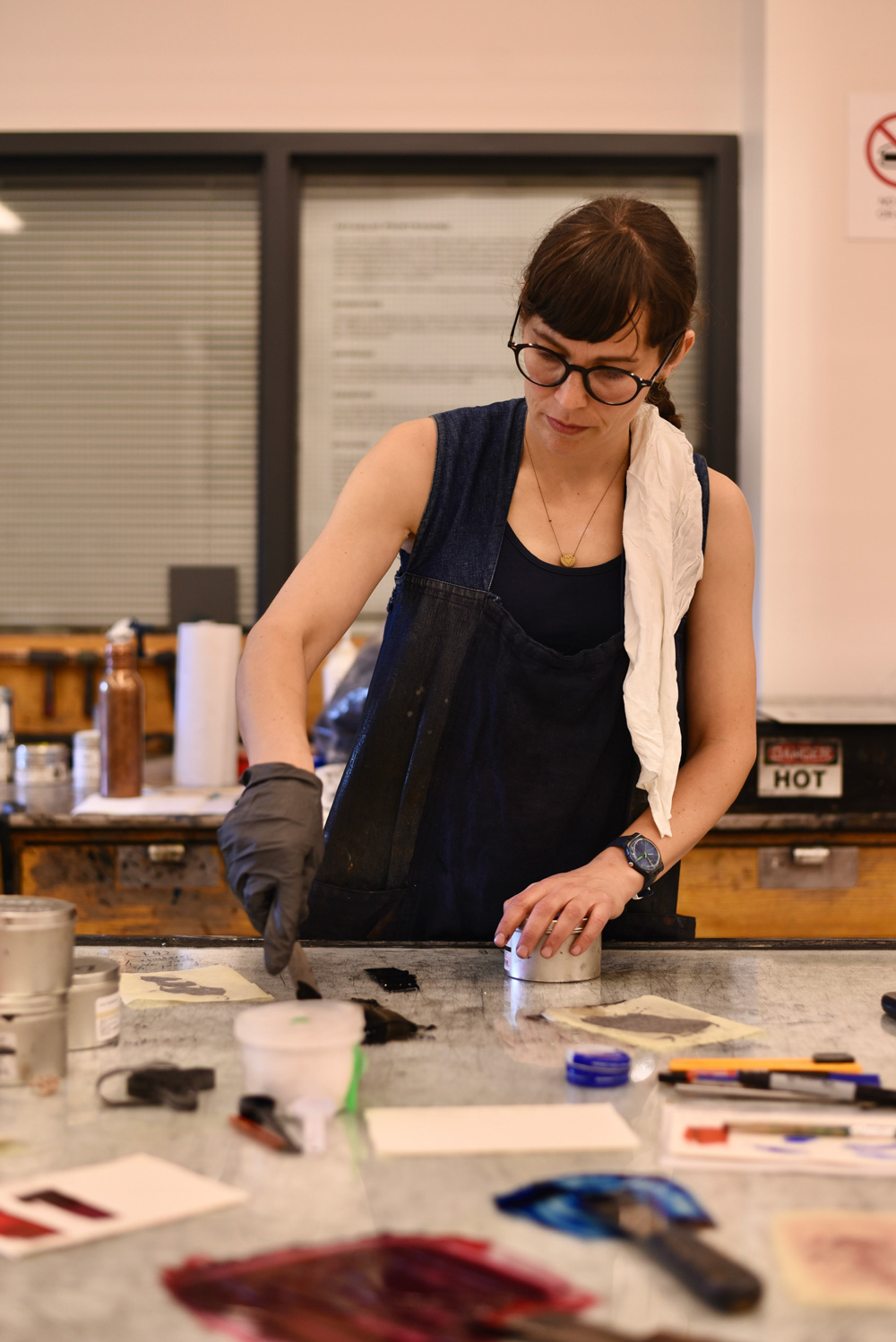 The collaborative relationship between Latitudes and Jillian has deep roots starting in 2005 when Latitudes co-founder Lucy MacGarry, and Jill, met as colleagues at David Krut Print Workshop. Jillian, director of the print studio, and Lucy, gallery director of David Krut Projects collaborated from 2005 to 2010 on what must have been hundreds of exhibitions showcasing the work of artists, writers and printmakers associated with the David Krut family of companies.

After curating the fair, FNB Art Joburg from 2015-2016, Lucy was invited by Jillian’s partner, Brendan Copestake to join a bid to produce the 2017 South African Pavilion at the Venice Biennale, which they won.

Drawn together once again in 2019, Latitudes worked closely with Jillian in her capacity as Master Printer at David Krut Workshop to develop a series of limited edition fine art silkscreen prints by selected artists for the inaugural Latitudes Art Fair.

While much has changed over the last two years – Latitudes moved online, establishing a curated market for contemporary African art, and Jillian and Brendan moved to Canada to start Jillian Ross Print together in Saskatoon, Saskatchewan – the close working relationship continues across continents.

The relationship provides a chance for emerging artists identified by Latitudes to benefit from the knowledge and skill of an experienced and passionate printmaking studio which offers exciting, new avenues for their art. Jillian Ross Print’s collaborations and relationships abroad also offer Latitudes’ artists exposure to a North American audience. 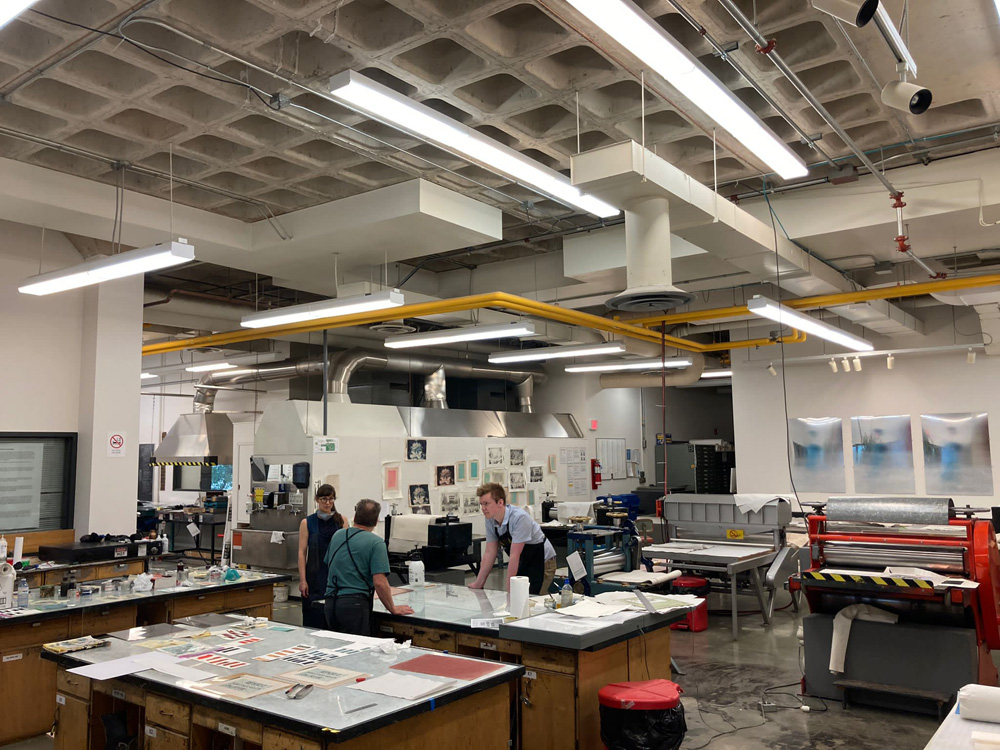 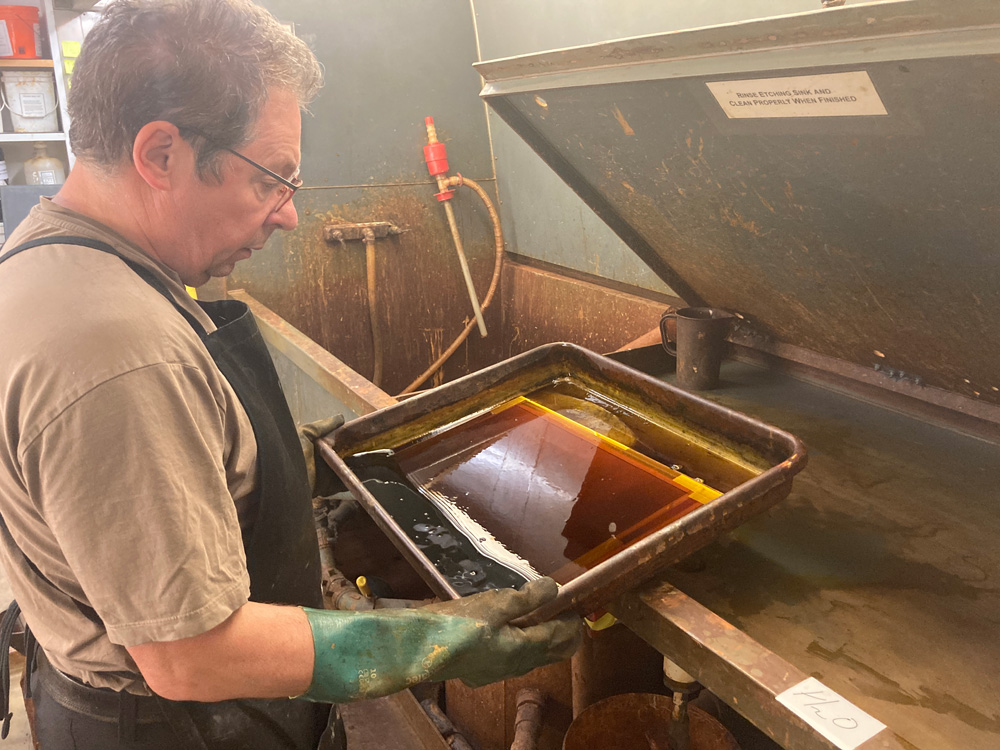 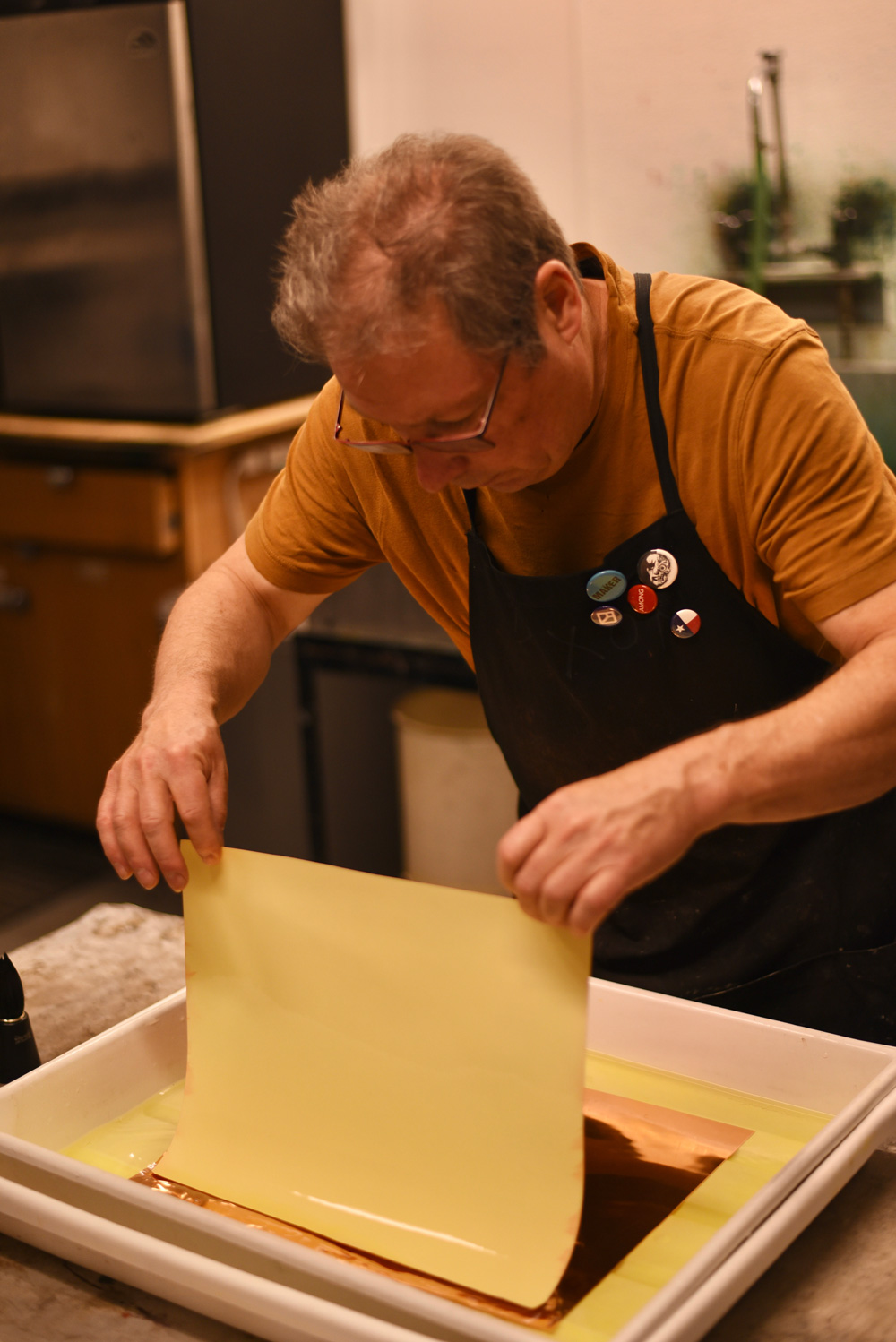 The Elements of Time and Distance

Both prints were produced in collaboration with Steven Dixon at the University of Alberta in Edmonton who specialises in photogravure. Jillian is currently completing a 12-month artist residency with the University of Alberta producing a photogravure project for William Kentridge. Jillian and Brendan made the 5-hour car trip to spend a week at a time in the studio with the fantastic print studio team. While they focused on the making of the copper plates, Jillian played with the printing and created many versions of the artworks with different effects and finishes, so Puleng and Cinthia could see a range of possibilities from which they could choose. “What we could do in the studio was just explore options for them,” Jillian says. “Working closely with these experienced technicians also made problem-solving more satisfying as our discussions produced a wider range of possibilities to explore.”

The original artworks were created in the artists’ respective studios in South Africa; thus lots of back-and-forth communication between Johannesburg, Edmonton and Saskatoon followed. Over hours of video calls between artists and printer, the technical possibilities of the medium were discussed, and each artist’s intentions were clarified. Throughout the development of the prints, Jillian, Brendan and the artists kept in contact through a string of digital messages, progress pictures and making-of videos. At every stage of development, the artworks were shipped to and from South Africa for the artists’ feedback - taking close to a month each time. “All of this couldn't be achieved in one go,” Puleng says. “There was a lot of conversation and experimentation that had to take place in order to achieve that final version of the artwork.”

Working remotely was an uncharted process with unexpected rewards. The lengths of time between feedback lent the project breathing space. “Because everything takes a longer amount of time to produce, you have time to digest the work,” Jillian says, “and time to figure out if the colour of it is correct. And the artists have time to react. Sometimes, when you're working in the studio together, you're so deeply immersed that you can't react because you need time away from it.” 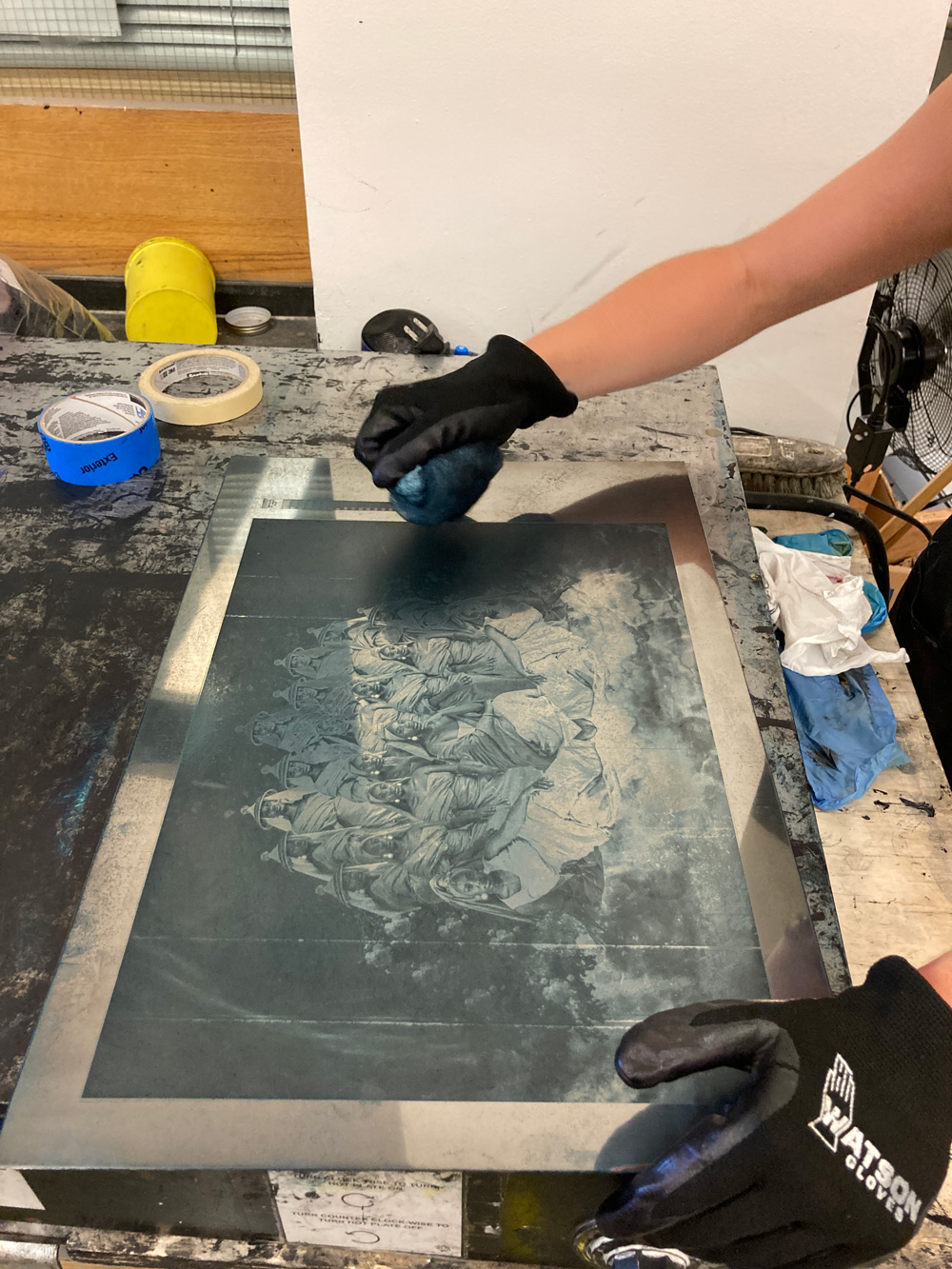 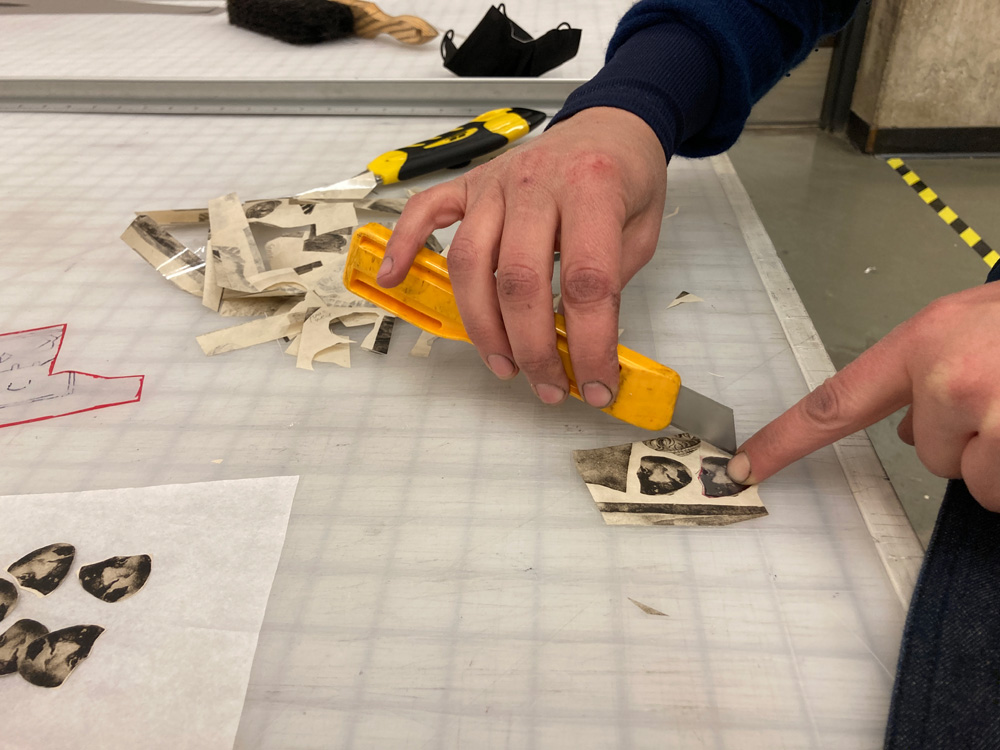 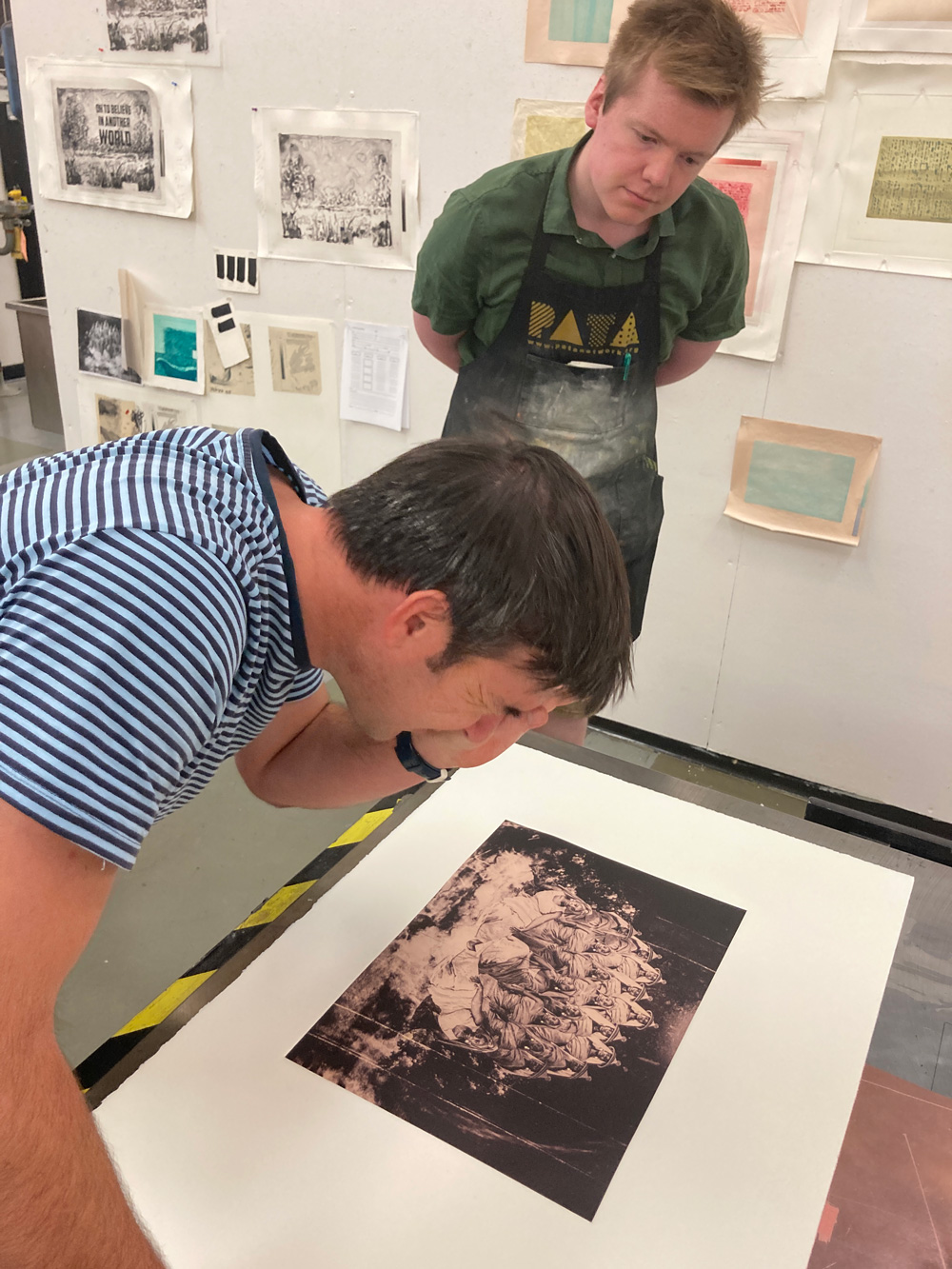 The Role of Trust

In the printmaking process, the artist is usually present in the studio to work alongside the printer. In this case, Jillian’s role became one where she’d advocate for the artists’ aesthetic intentions. “That's the difficulty of remote working,” Brendan says. “In a different time zone, in a different country, the artist isn't able to make certain decisions quickly. We had and have to be very careful to keep the integrity of the decision-making in line with what the artists wanted and with their artistic practice. Otherwise, you can deviate too far away from what they intend.”

Cinthia says that trust was one of the biggest lessons: “Being able to trust the team and their skills to pull such an amazing image from all of our back and forth chats and calls about ink and swatches. Even though I was not there in person, I was still there, if that makes sense?”

“Working with Jill has been amazing,” Puleng says. “I’ve learned about the power of detail and process. My own process is digital, and even though I am capable of creating different textures in Photoshop, I would never have been able to achieve what we've managed to do through photogravure. The process has added a new layer to the work and a much more tangible authenticity and feeling.”

For Cinthia, direct gravure was an unfamiliar technique that brought new possibilities for her collages and how to treat them. “It added richness in details and tones,” she says. 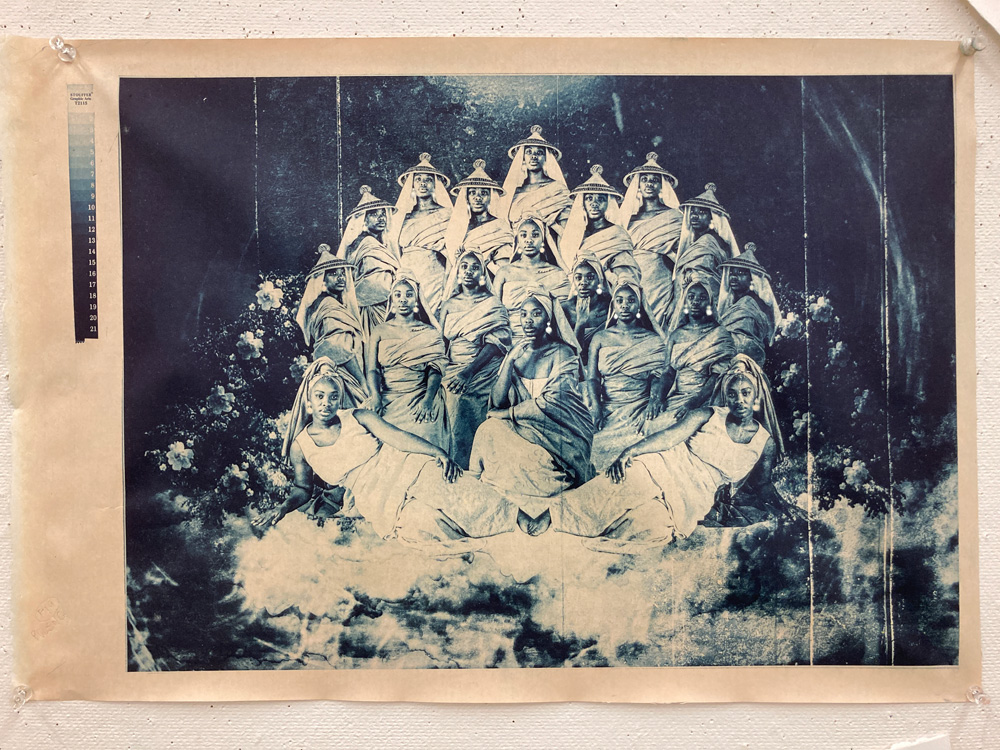 Puleng Mongale’s Grounded, a colour trial proof printed for the artist to see.

The Result of True Collaboration

The beauty of a successful collaboration is that something is produced that the individuals would not have been able to achieve on their own. In combining their skills, magic happens. “This has been a truly collaborative project,” Lucy says. “And that’s what Latitudes is about.” For Puleng and Cinthia, it has allowed them to see their work in a new light. For Jillian Ross Print, these opportunities allow them new discoveries in printmaking. Jillian says, “It's been playful and hard work and interesting all at the same time.”

Watch Latitudes Online for the launch of the editions. 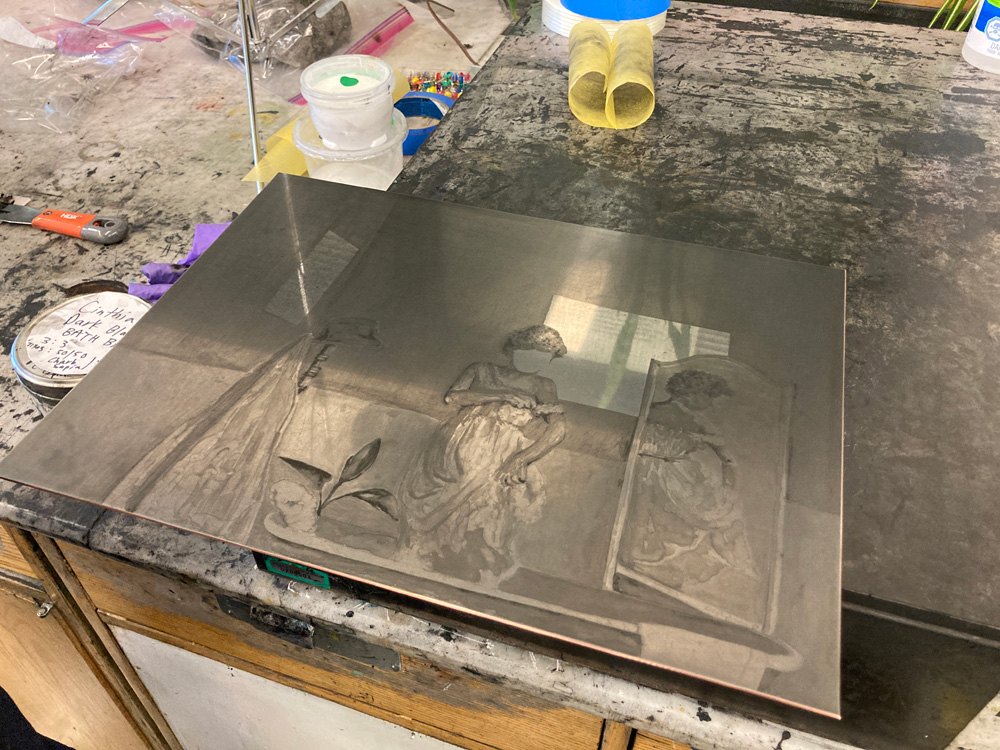 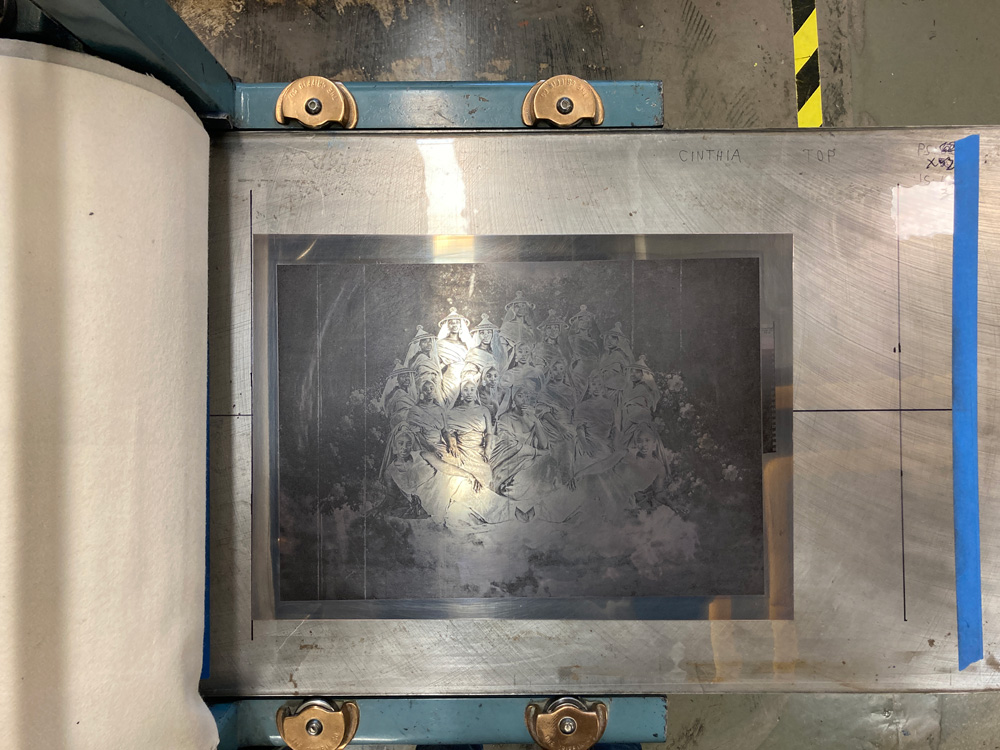