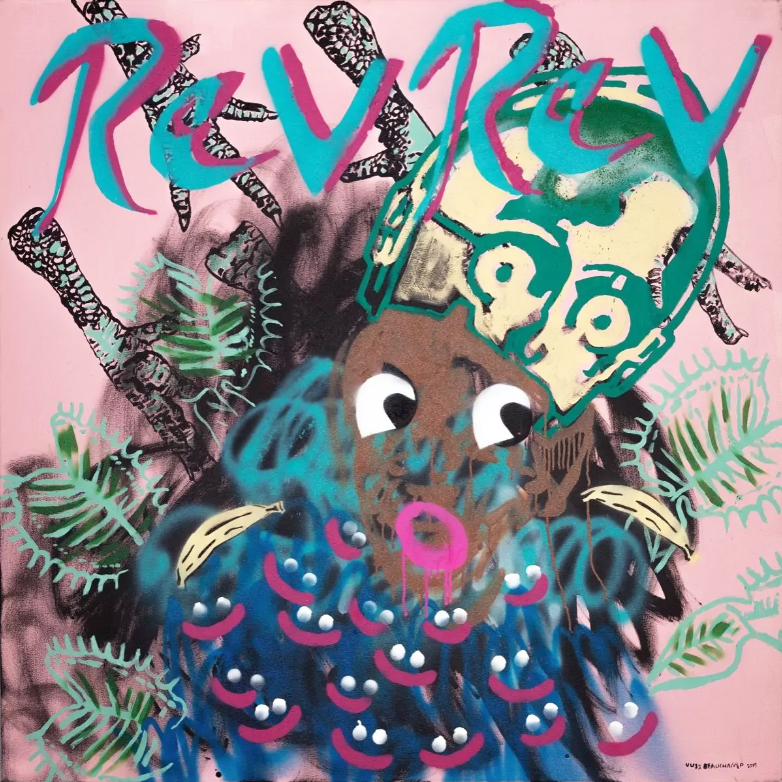 As a mixed media artist who studied printmaking, painting and graphic design, Vusi Beauchamp’s mediums and materials vary; he has been known to use methods such as spray painting, stenciling and screenprinting. Until the 31st of March, four of Vusi’s paintings are displayed on the walls of Hallmark House hotel in Johannesburg as part of the Studio Nxumalo-curated group exhibition ‘The Oasis’. You’d probably be advised not to, but if you were there you could reach out and touch them. Less tangible but no less exciting, at the same time digital NFTs of two of these works are on auction as part of Invictus NFT Lab’s Out of Africa collection.

The two works, Revolution 1.1 and SALE are mixed media artworks that form a critical part of Vusi’s long term, ongoing series “Paradyse of the Damned” that’s been shown in part at the Pretoria Art Museum and JAG (Johannesburg Art Gallery), among other galleries and fairs. Like a satirist may do through cartoons or caricature, Vusi uses his sometimes confrontational artworks to comment on and critique social and political issues and events in South Africa. However, while his works may parody politicians – he notably painted many depictions of President Jacob Zuma and has painted African dictators – his works simultaneously highlight the racist stereotyping employed by the media in such depictions published throughout history. This approach has been described as ‘dual vision’, offering a necessary and nuanced perspective.

Vusi let us know more about the ideas in his work.

Where do ideas for new works come from?

My art is inspired by the social and political landscape of South Africa.

You’re also a scriptwriter - does this inform your art at all?

Not all the time, my themes tend to vary and I try not to box my imagination.

How has your art or what you’re interested in communicating evolved over your career?

My art is uncomfortable (yet necessary), my practice has led me to seek knowledge, to know one’s own vulnerability and to expel fear from my mind.

​​Why do you paint people/characters the way you do?

In the context of the two artworks, I used certain caricatures derived from movies and “Tintin in the Congo” by Georges Prosper Remi, known by the pen name Hergé. These images serve to highlight the ways in which stereotyping of Africans has persisted through history and it is important to separate the caricature image of a black person from the reality of what a black person actually looks like.  As recently as the discovery of the omicron variant by South African scientists, a Spanish newspaper published caricatures of black people crammed into a boat bringing the virus to Europe. As much as half of the world ignored and did not condemn the newspaper, it further illustrates how these images were once accepted and were part of how “others” were portrayed. Subjugation through imagery is never totally expunged; out of sight, out of mind doesn’t mean it doesn’t exist. The power of perception has always been a colonial tool. Lest we forget, the narrative will blossom into a vast multifarious branding organisation.

What is depicted in the works that are part of the Out of Africa collection?

The parameters in which stereotyping of black people and their bodies can lead to actualisation of violence, and the approximation to the wealthy and possessions of value (exploited) narrated by history in the context of “Apartheid”.

As an artist, what interests you about NFTs?

The possibility of the future and my art being present and accessible in the metaverse.

Would you say you’re an early adopter of new things?

No, I am very conscious in adopting things, because they must eventually become a part of me.

Do you think it’s something you’ll do more of?

Yes, when the price is right. 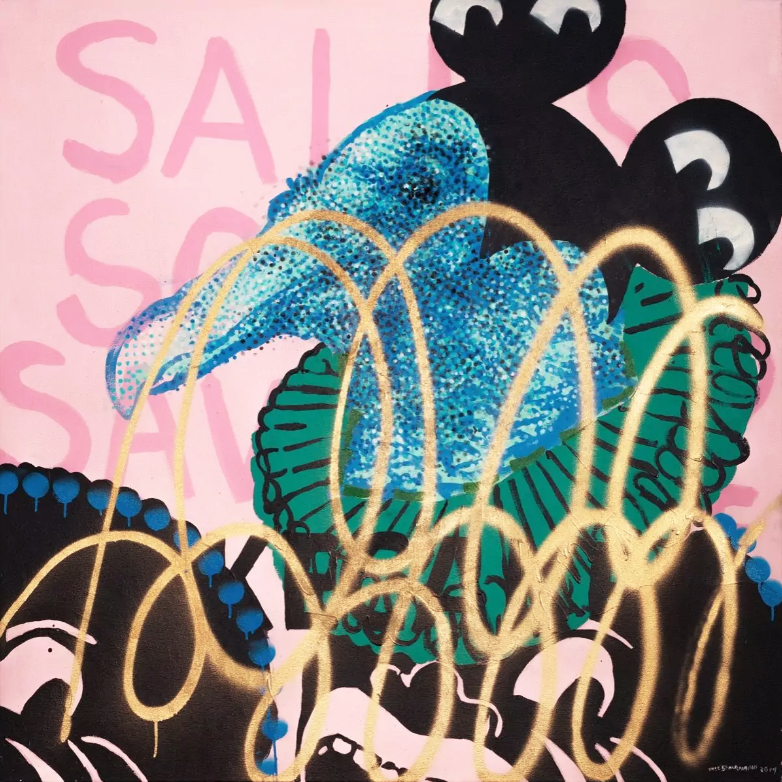