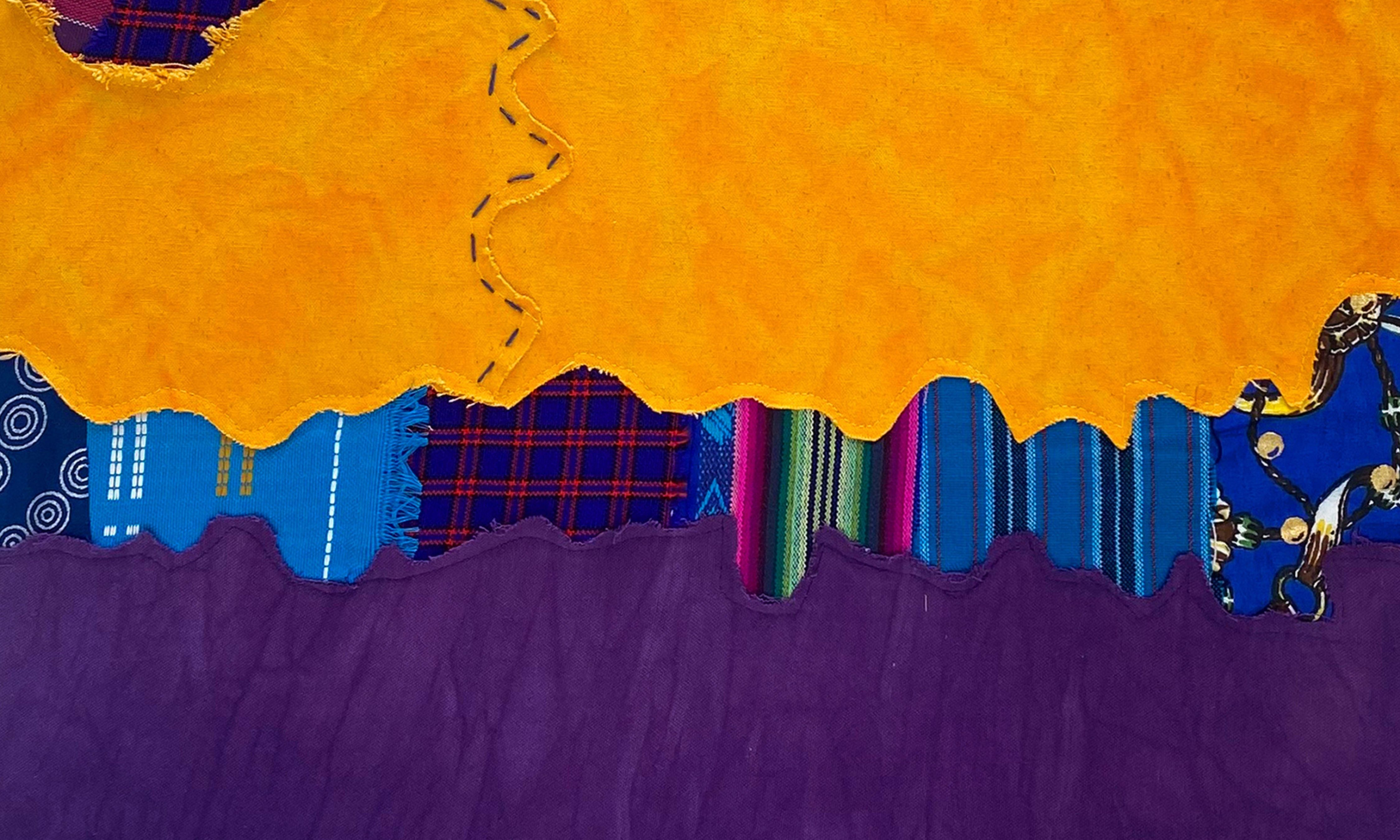 THE MIX DESIGN HUB AND THE COWRIE CULTURE PRESENT:

TIES THAT BIND US,

This is the first solo exhibition by Kwesi O. Kwarteng in Ghana.

The exhibition title, Ties That Bind Us, is a recognition and celebration of the ideals, shared aspirations, longings, resilience, creative inspiration, and nuanced cultural representations of blackness reflected in art made in Africa and by the African Diaspora. The Ties That Bind Us solo exhibition is the result of an open call announced by The Cowrie Culture in August 2021. There were over 300 applicants from 4 continents and Kwarteng was selected.

Kwesi Kwarteng (1988) born in Accra, Ghana and currently lives and works in Newark, New Jersey. He is an alumni of the School of Visual Arts (SVA), New York City. His works have been featured in Revision and Response, a group exhibition at The Newark Museum and two-person exhibition at The Calabar Gallery, New York City. He is the recipient of The Creative Catalyst Grant (2020-2021). His works are held in private collections around the world.

Kwarteng creates resplendent textile artworks using a diversity of culturally significant fabrics from around the world including kente cloth from his native Ghana, raw silk, and upcycled remnants which he dyes by hand, stitches, and reimagines as masterful tapestries. Kwarteng’s repertoire of artworks can be characterized by 3 distinguished textile mediums—multi-dimensional sub-sculptures that combine textiles and mesh wire, drape pieces that combine a multitude of textiles that he shapes into fluid, floating fabric arrangements and one he calls, ‘textile canvas paintings” which appear as stretched and framed abstract art made from fabric. Kwarteng approaches his art practice with an intentionality and regard for the perfect imperfection of his experimental creative expression. His abstract textile works on canvas, the “textile canvas paintings” are precise and serve to distill the conversation between the more layered drape and sub-sculptural works. All Kwarteng’s works serve to explore multi-cultural identity, social cohesion, and global interconnectivity which act as counterpoints to the absurdity of racial tensions and social divisions that persists in the US where Kwarteng lives, even despite the Black Lives Matter movement.

In Kwarteng’s works, there is an exploration and reimagining of the practice of the handmade, woven textile traditions of the Akan and Ewe weavers of Ghana. He is equally influenced by El Anatsui’s extraordinary sculptures, twentieth century African American quilting artistry, and abstract, color field paintings by Sam Gilliam among others. He perfectly captures the nuances of using what might be considered a myriad of discarded remnants and swatches to align narratives that reflect his experience growing up in Ghana and moving to the United States as a teenager. Through his early challenges as an immigrant, he learned to embrace the multi-facets of culture and the heterogeneity of the immigrant story in the Bronx, New York, one of the most culturally diverse cities in the United States. 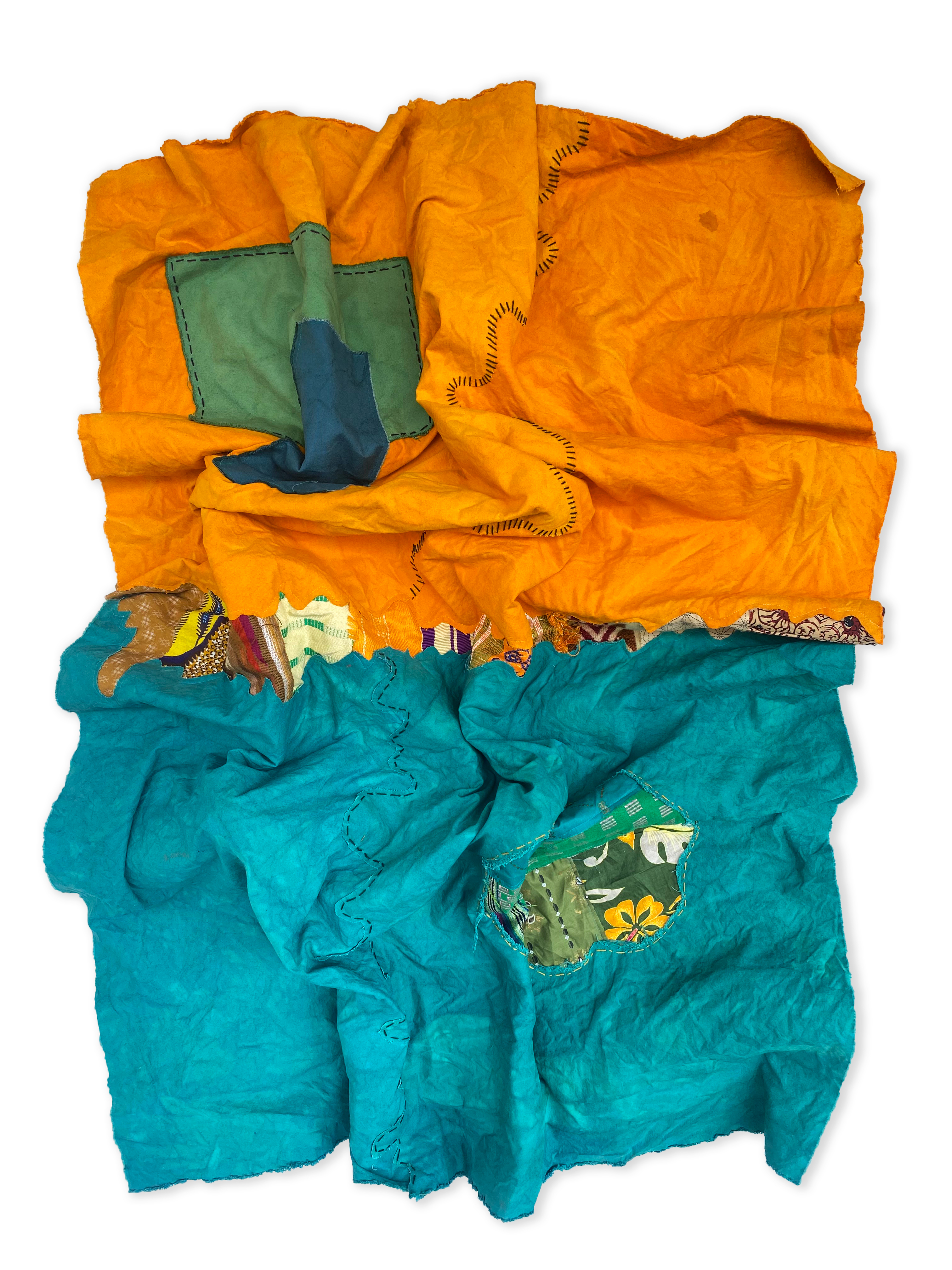 Kwarteng creates resplendent textile artworks using a diversity of culturally significant fabrics from around the world including kente cloth from his native Ghana, raw silk, and upcycled remnants which he dyes by hand, stitches, and reimagines as masterful tapestries. 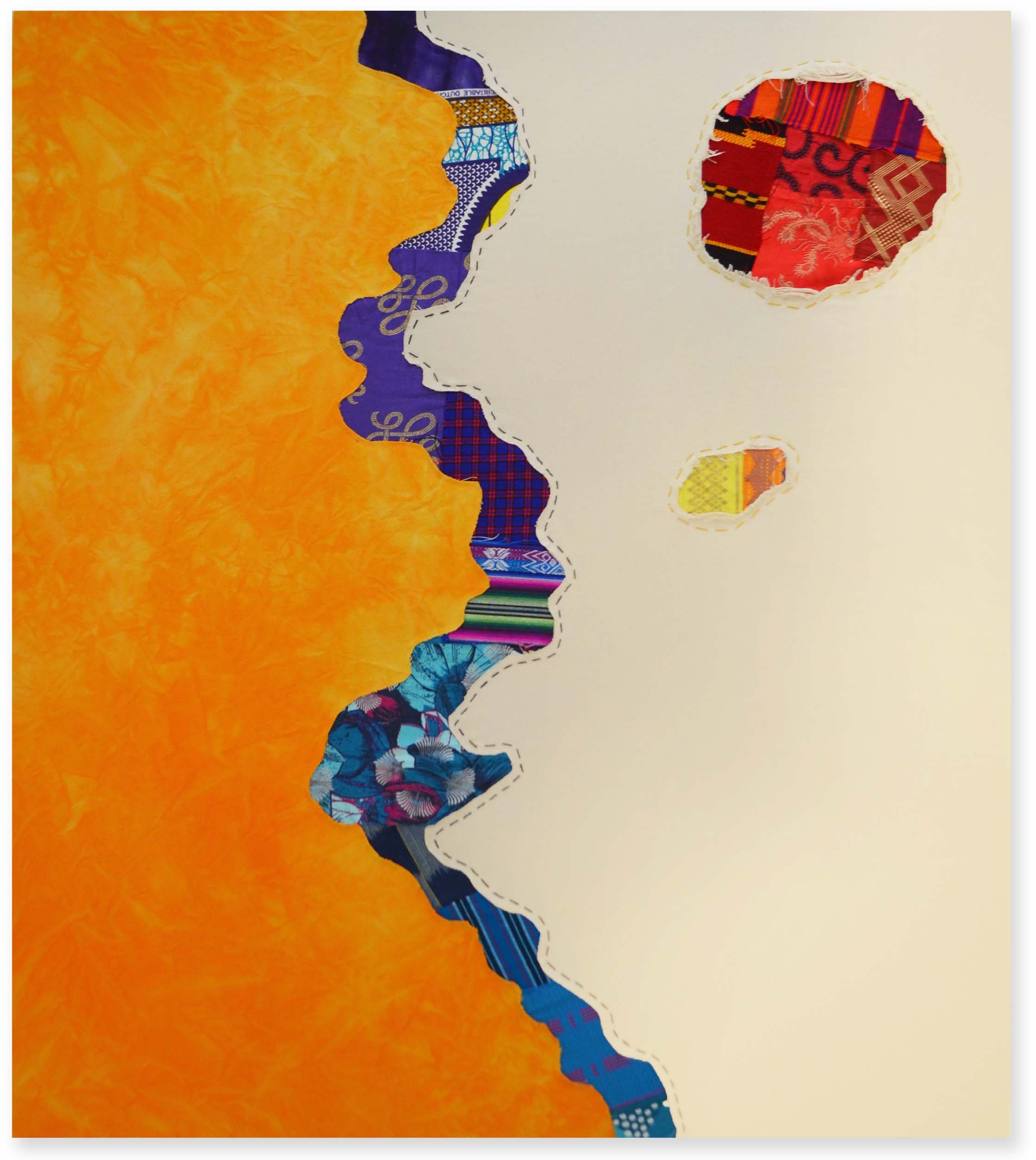 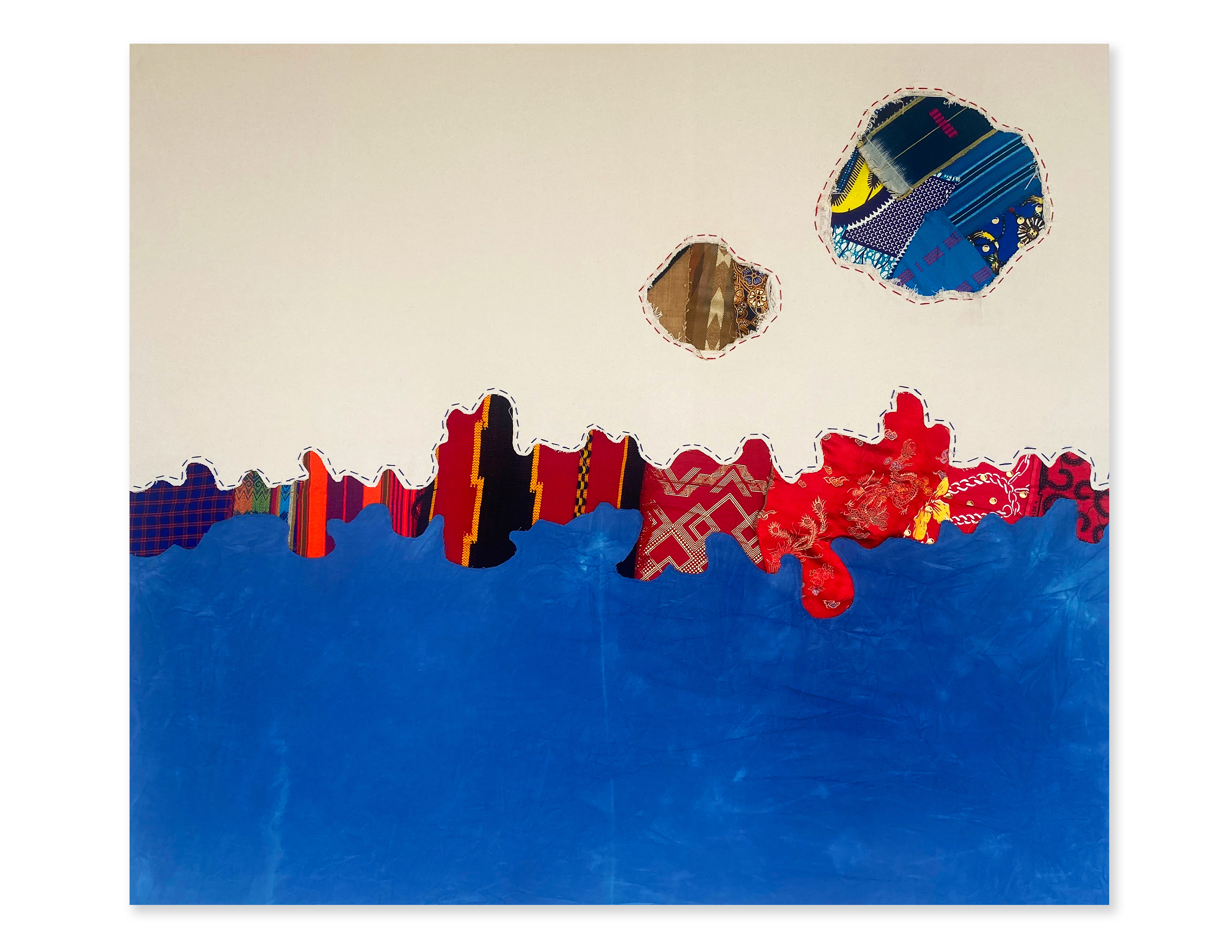 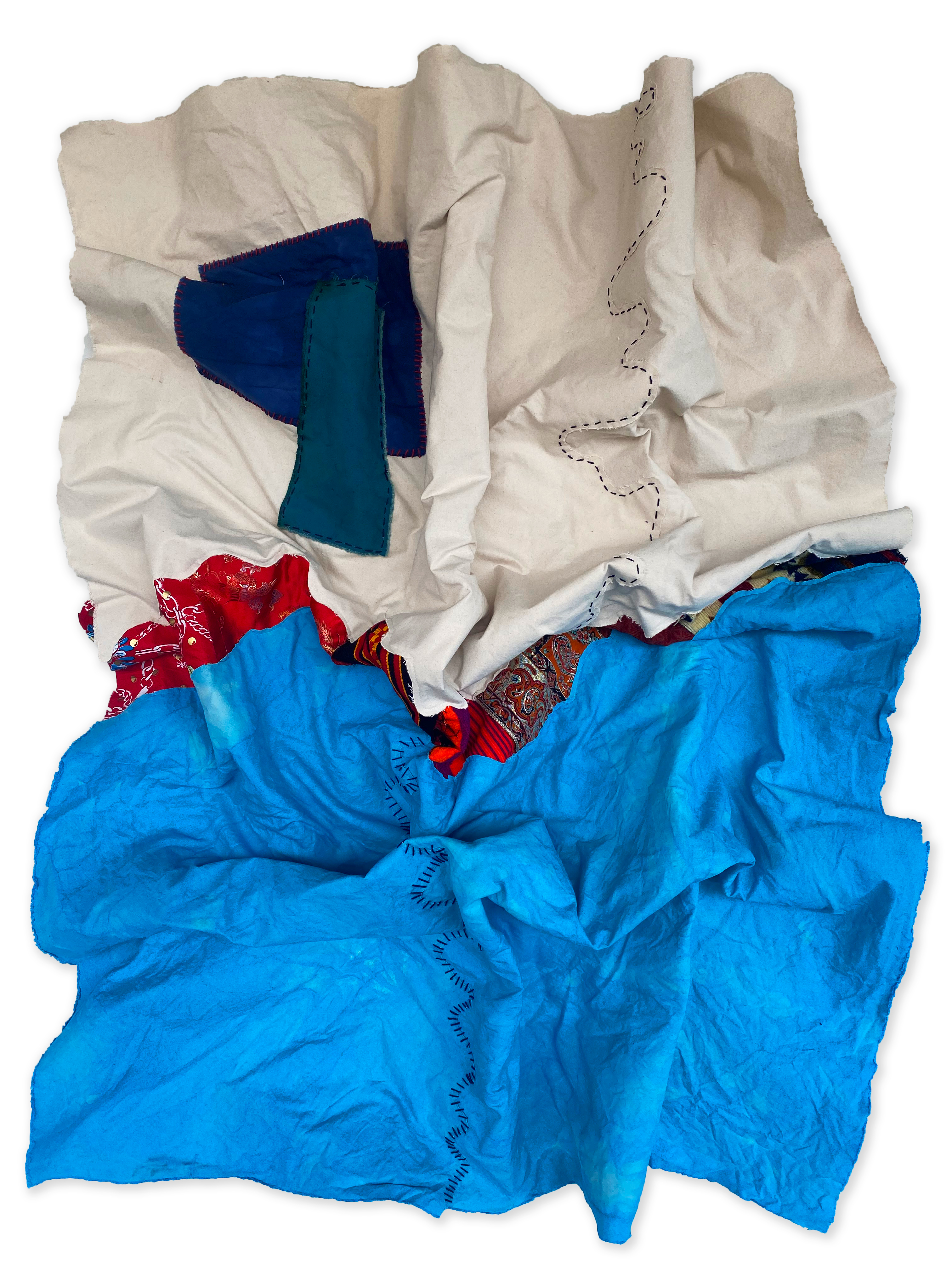 About The Mix Design Hub, Founded by Binta Ata
A unique hub promoting design and innovation by focusing on sustainability, female empowerment, African and global creativity, multi-functional spaces for The Office Furniture Company, conferences, workplace, event space and a gallery and rooftop restaurant that overlooks the Atlantic Ocean.

About The Cowrie Culture, Founded by Nish McCree
Advocacy and exhibition platform for Art made in Africa and by the African Diaspora. Committed to the expansion and sustainability of the contemporary art ecosystem in Ghana and across the continent.

MORE ABOUT THE MIX DESIGN HUB