Working on different continents allowed Cinthia Sifa Mulanga and Jillian Ross to generate a considered series of prints that distill the essence of her art. These works will be on show at FNB Art Joburg this weekend. 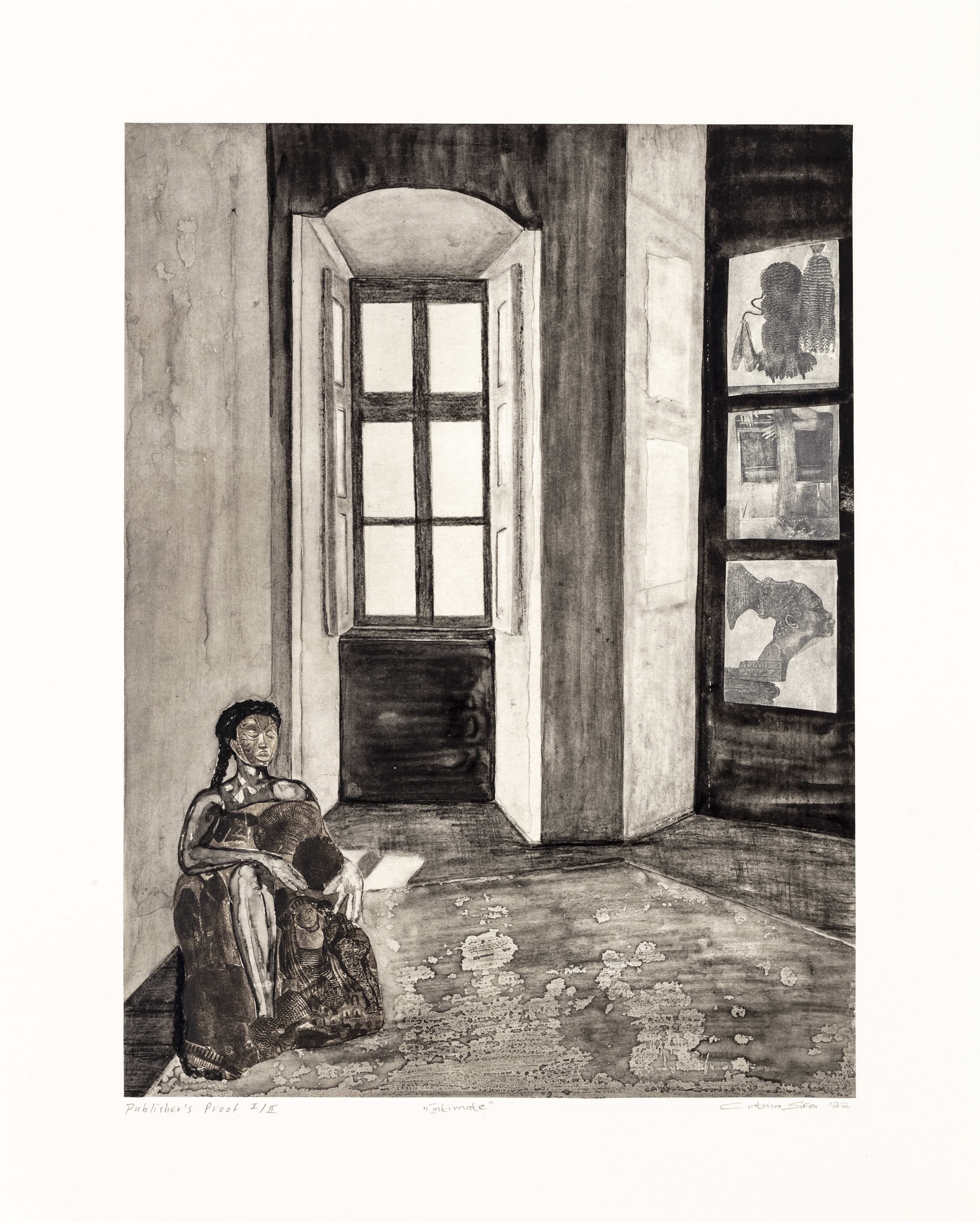 The process of creating prints is rarely thought of as one that an artist can participate in from afar. Most artists are not only in the studio with Jillian Ross, David Krut’s most acclaimed master printer, but they are hovering behind her watching the process unfold and making decisions about the colour of the paper or processes that will impact the outcome of the final images.

Yet when the young Joburg-based artist Cinthia Sifa Mulanga worked with Ross on a trio of prints that are due to be presented at the upcoming FNB Art Joburg she had to do so from afar since Ross found herself unable to leave Saskatoon, Canada, during the height of the pandemic. Like many people whose lives were uprooted during Covid-19, Ross had been forced to find ways to continue working in Saskatoon. One of her major clients, William Kentridge, the renowned South African artist, needed her to remain operational.

After locating a printing studio at the University of Alberta, Ross got to work on the project with Kentridge, and then Mulanga. It was as if all the planets were in alignment, for the photogravure process that Ross had been working on – etching photographic images - proved the apt technique to translate the collage element of Mulanga’s practice. This feature of the Congolese-born artist’s work is an expression of her interest in the representation of black women, not only how they are presented in popular culture but also how they shape their identities through photographic self-portraits on social media. 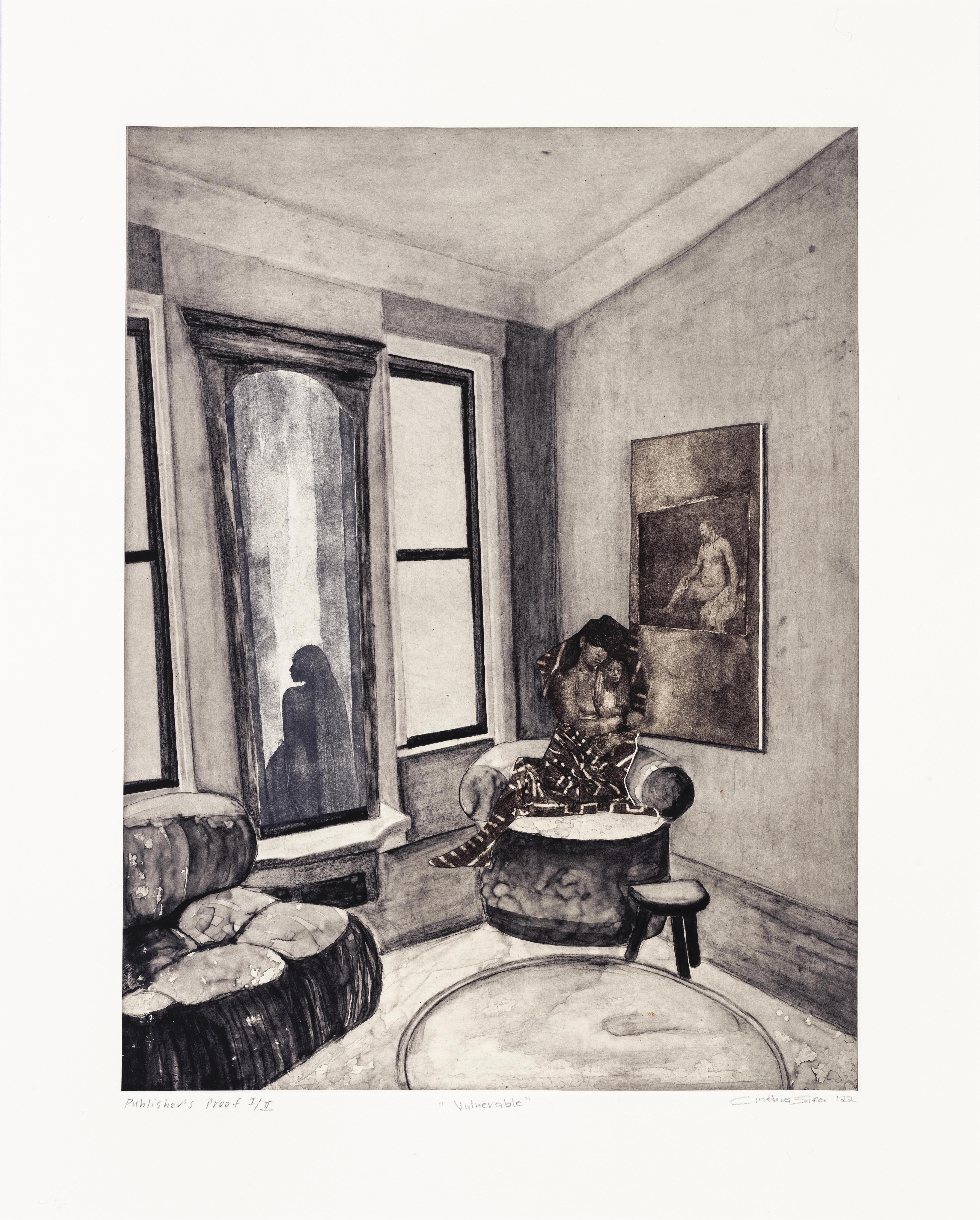 Mulanga typically presents a series of black female subjects in domestic settings, which are juxtaposed with images hanging on the walls that relay how women are or have been represented through art. The referential nature of this element of her work makes collage an ideal conduit.

The photogravure process pushed this feature further as it allows for the collaged elements to be more seamlessly integrated into the composition.

As such, the character of her art has been thoughtfully translated into these editioned works, which will surely be welcomed by collectors, given the demand for her paintings, which often sell before they are completed. Undoubtedly, the demand for Mulanga’s art resides in her interest in the conditions that shape the black female identity.

The character of Mulanga’s mark-making comes into sharp focus through her prints. This is no doubt due to Ross’s skill as a printer, but she says it is also the result of the extended period that Mulanga had to create drawings that would later be etched into copper plates. Covid-19 afforded her this time, but also with Ross working on another continent, there was less pressure to generate the drawings immediately. 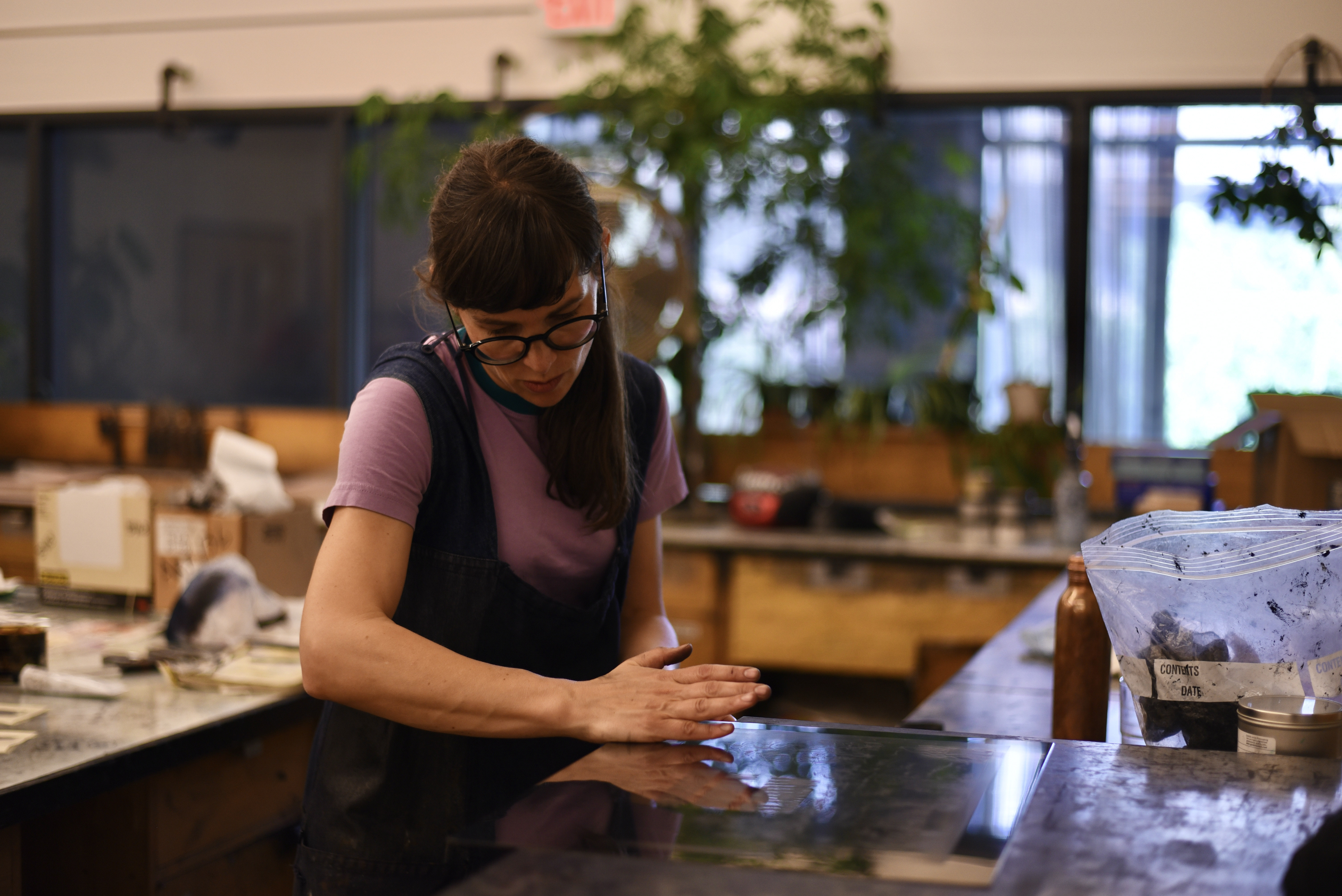 “Because she was working in her own studio and in her own time, the drawings aren’t forced or laboured. She did a beautiful job. When you're working in a studio that isn't yours under somebody else's timeframe, which happens often when you're working collaboratively in print studios, it's from 9 to 5. And in this case, Cinthia just had time. As much time as she needed.”

This sense of time affording deep contemplation, and self-reflection is the mood that infuses the trio of prints and is also echoed in the titles assigned to them; Intimate, Vulnerable and Ne lave pas ton visage' (do not wash your face). In contrast to her paintings, these works only present one female subject in a room, though the artworks of other women displayed on the walls summon other subjectivities. In this way, the sense of self-reflection is more tangible. The use of mirrors in two of the prints further enhances this idea of scrutiny but also brings into focus the possibility that the subjects cannot perceive themselves fully – as the mirrors reflect an image that is beyond their line of sight. This suggests there is always an aspect of their physical selves that escapes them. An awareness of this keeps them tethered to the mirror, which promises views of themselves beyond their everyday reach.

Mulanga is inspired by social media and how women present themselves through selfies, where the camera lens, the screen and ‘likes’ function as the veritable ‘mirror’. However, as an artist interested in the role the western canon of painting and photography has played in this culture, she references it through the works hanging on the walls but also via the traditional compositions and the classical architectural details of the rooms they occupy. This all works at establishing these scenes as timeless. 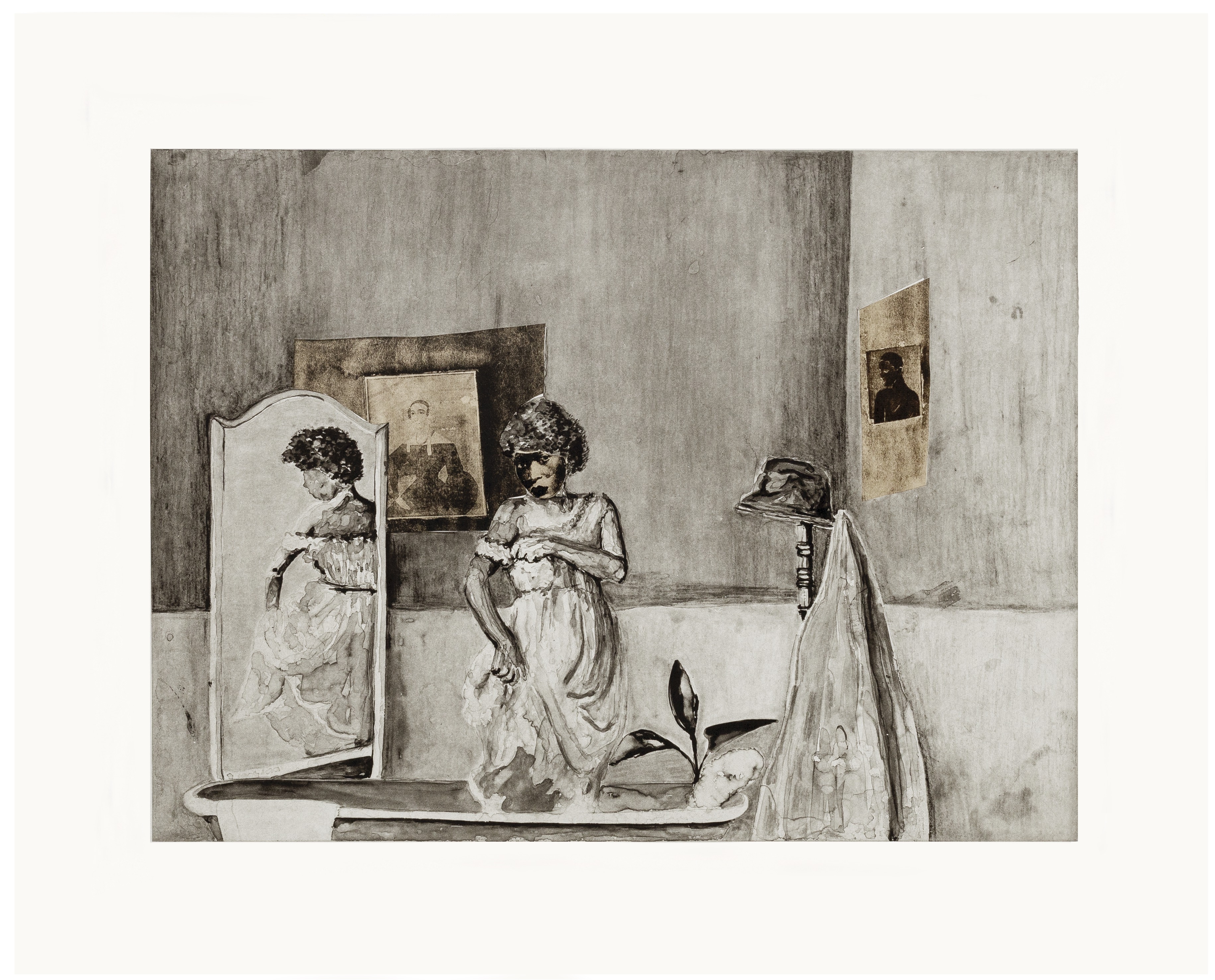 This could be driven by two motives that underly Mulanga’s practice; to insert black female subjects into the western canon, but also to draw attention to how female subjects remain the subjects of scrutiny, not only via society’s gaze but their own.

This sense of timelessness is supported through the choices Mulanga made in the materials and mediums of the prints. She opted for cream paper and brown-toned inks, according to Ross. The Japanese paper used for the larger work, called Kitakata, has an ‘archival’ look too, which further situates the work as being of another time.

In adding texture to the garments and enhancing the collage character that is specific to Mulanga’s practice Ross advised a Chine-collé process, which essentially sees an additional layer of paper bonded to the image. Not that Mulanga was a stranger to the printing process; she trained at the Artist Proof Studio in Joburg, which specialises in printing.

The slow back-and-forth nature of the communication between Mulanga and Ross in creating these prints, which saw samples being sent to South Africa for Mulanga to peruse, meant that every decision in the creation of these prints wasn’t rushed. This has ironically, resulted in a series of prints that relay a different, yet full, aspect of Mulanga’s art despite her not being in the room where they were made.