On the sharp edge between horror and humour, the sensational Daily Sun headlines aim to shock in order to sell, its striking graphic red and white logo is unmistakable and its circulation reaches working-class South Africans.

Daily Sun has been captivating, enraging and entertaining South Africans for almost two decades with its outrageous headlines jumping out from newsstands or repeated for impact on street pole posters along our daily commute. Launched in 2002, it’s also caught the imagination of South African artists who came of age around the same time the paper came to be the largest daily newspaper in the country. At an affordable price point, the tabloid is widely accessible and in 2014, the paper proved that one copy can be read by up to twenty different people as it’s read and passed on.

On the sharp edge between horror and humour, the sensational Daily Sun headlines aim to shock in order to sell, its striking graphic red and white logo is unmistakable and its circulation reaches working-class South Africans. All would be noble aims for contemporary artists in South Africa: to provoke, to sell, to make work that’s recognisable and to relate to a local audience.

These five South African artists have used the Daily Sun as a device in their artworks, all in different ways but all to poignant effect. 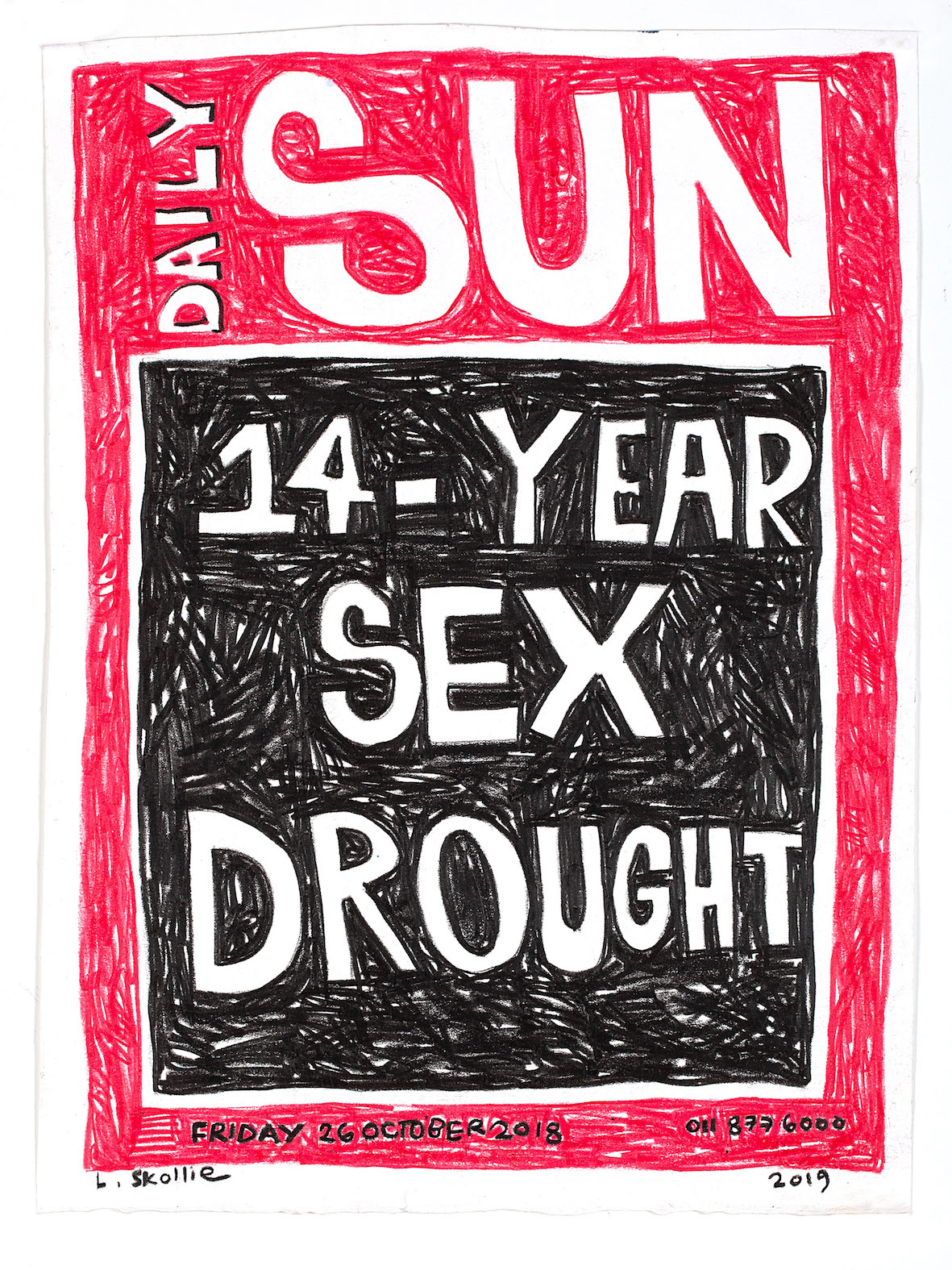 In South Africa there are so many disgusting headlines; upsetting, disturbing, you can never forget them. I find the humour and often disrespect in Daily Sun headlines as a buffer between me and the somberness of the news. Daily Sun news is HARD and FAST and NOW and I guess I can relate to the method of sugarcoating horror to trick others to engage with it. That is exactly how I see lots of my work, as deeply ugly, upsetting but with a coating of sweet to make it digestible.

The poster format of Daily Sun has taught me much, like what a 4-5 is or what a Ben 10 is within a South African context. It brings news to people that do not have access to internet or even much money (R4.20 a copy as opposed to R39 for some of the more bulky 'respected' newspapers). I guess I see it as a bridge, my dream is to be on the cover.

In this artwork I was trying to create that type of awareness that you get when you come across any type of media, newspaper, or news headline. But in this case it was a newspaper so a front-pager article that would show you something that’s affecting us in society. My artwork is based around gender-based violence and violence against children. As you can see, some of the articles that I used in the artwork are real articles that speak about real issues that are happening. All of the things I use in my artworks are relevant to what the artwork is speaking about.

I try to make work that impacts the way that the media impacts. I try to make art that speaks to the masses. The reason why I use the Daily Sun newspaper is because Daily Sun is like one of the most common newspapers that anyone can relate to and anyone can identify with from locations to the suburban areas. Everyone knows about Daily Sun with all their controversial newspaper articles. So I wanted to use them to create that kind of controversial artwork because it is a serious issue that I’m addressing in my artwork.

Khotso Motseoneng - Daily Sun (why get aid when you can get paid?) 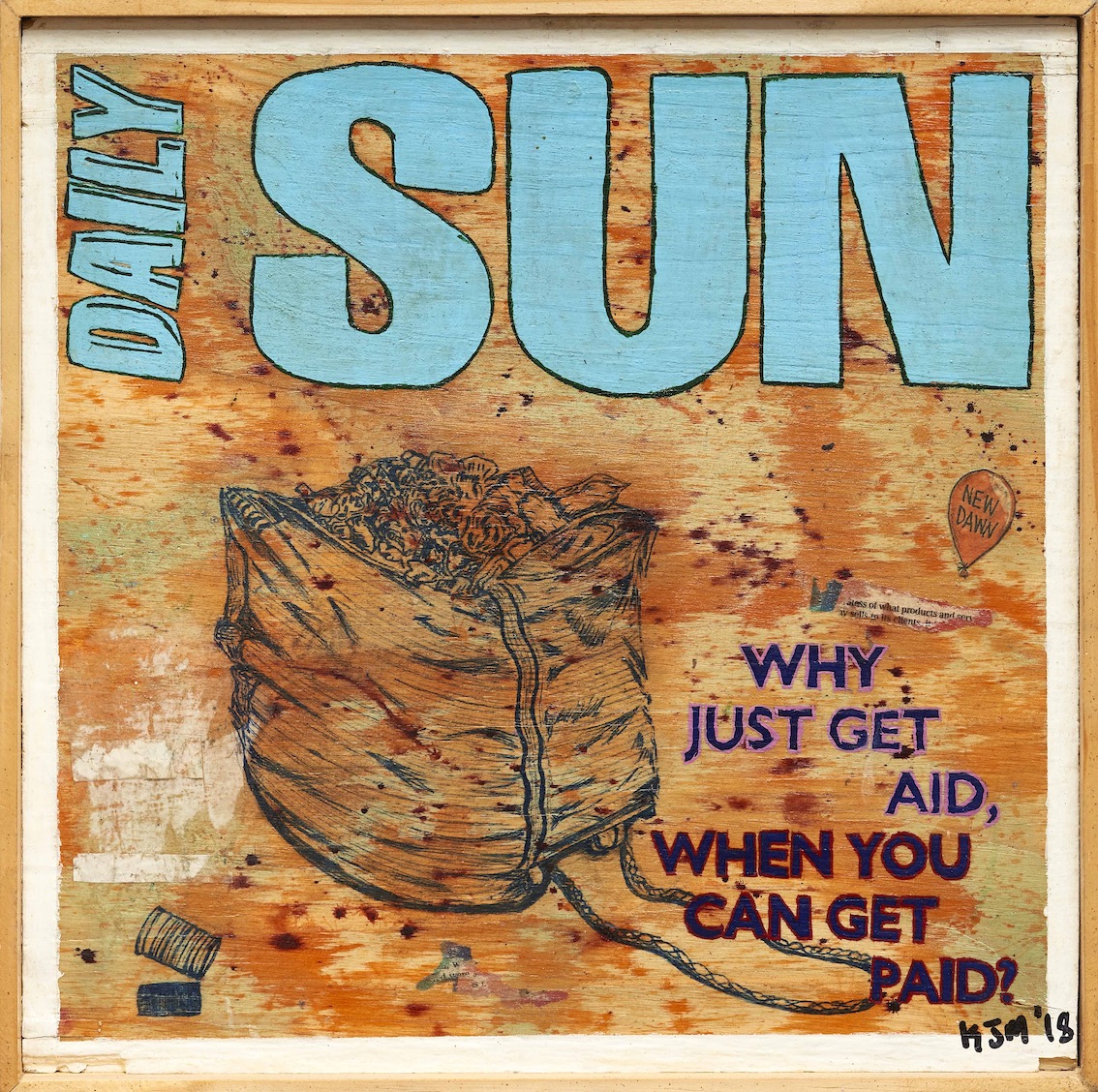 The purpose of the headline (Daily Sun) in my work acts as a reminder to the viewer that the sun rises every day and a new activity arises.

In my opinion, the words are received differently depending on which side of the culture you fall on. For the poor people in townships and villages of South Africa it’s a constant reminder of the conditions they have to face each and every new sunrise. 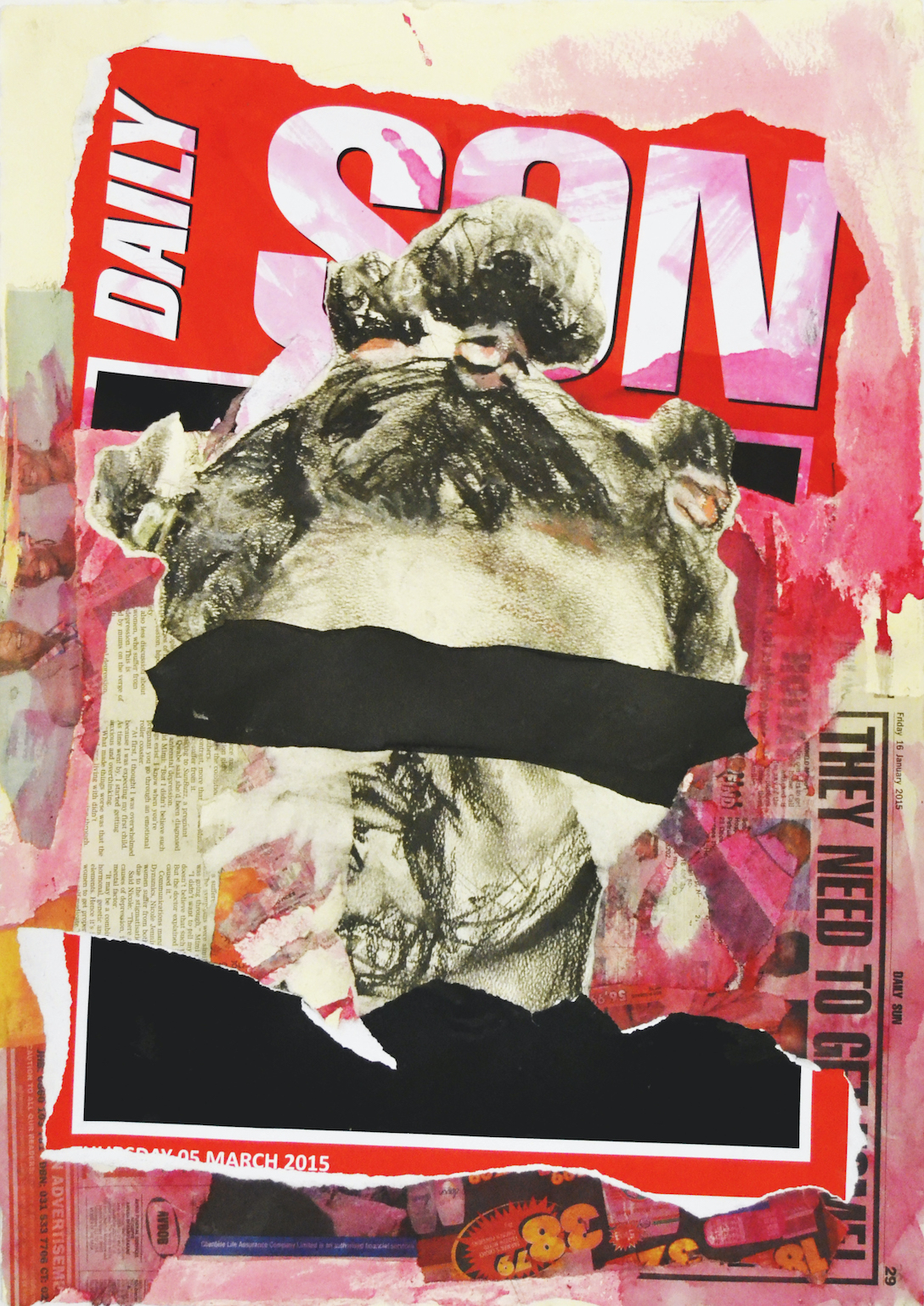 My work belongs to the realm of popular culture in that it uses content found in daily newspapers and at times I use branded images of products that are consumed daily. I also use these elements to convey a plethora of social issues that revolve around (Black) masculinity and how it’s visualised in daily media and brands. Therefore, Daily Sun plays a crucial role in my work because it is the carrier of the kind of content that fits within the margins of popular culture, and it’s created in a way that it can draw attention, allows for easy and quick reading and can at times be provocative or spark a little controversy. Traits such as easy readability, thought provocation and noticeability are some of the things I hope to achieve in my work.

My assessment of the Daily Sun newspaper is centred around my work’s overarching theme of masculinity and how it’s represented in the newspaper. My assessment often draws parallels between Daily Sun and colonial representations of Africans. These similarities can be seen in how Black men are still associated with animals as was done during the colonial era. This symbolic dehumanisation of Black men is now conveyed in different forms where at times the associations are tied to animism and witchcraft through the invocation of the tokoloshe and his genitals are linked with a 45-caliber pistol.

To a general reader, these topics may seem like entertainment or just another article in a newspaper but when read analytically one can conclude that Daily Sun subconsciously maintains certain colonial themes and methods of representing Black men. These themes and methods paint a complex picture of Black South African men, which on the one hand is hegemonic, greedy, fearless and beast-like amongst other things. While on the other hand men are shown as weak, poor and powerless subordinates. These traits ignore the positive good that some (or even most) Black men do in South Africa. 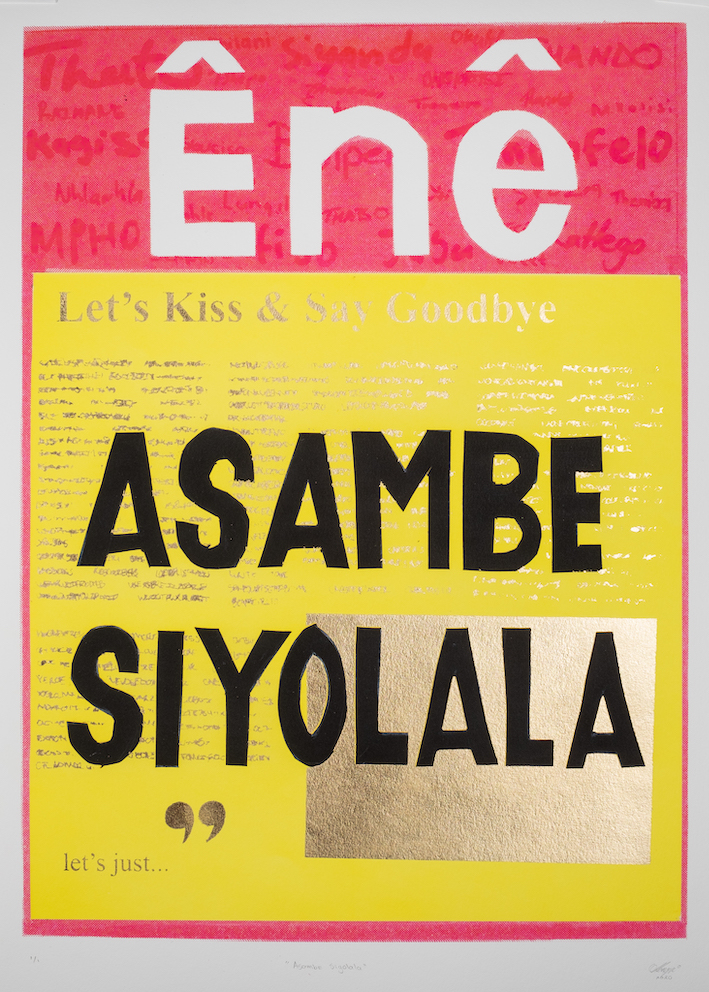 How and why do you use a newspaper headline layout for your works?

I began using the tabloid posters because they were the most ideal form for exploring the ideas of "Bua le Ênê". The object is familiar, fleeting, occupies public space daily and is iconic to the South African city landscape. These posters document, spectacularise and in some cases exist in articulating surreal experiences of everyday people who read these stories.

My intention was to borrow what is already associated with the posters and juxtapose it with statements and ideas we would not associate with the poster. I was interested in capturing things which we find difficult to engage with publicly and create more intimate and personal portraits with words. The words that mark us as different or the same, bring us closer yet create distance, with a specific emphasis on articulating complex and multiple ways on being through language.