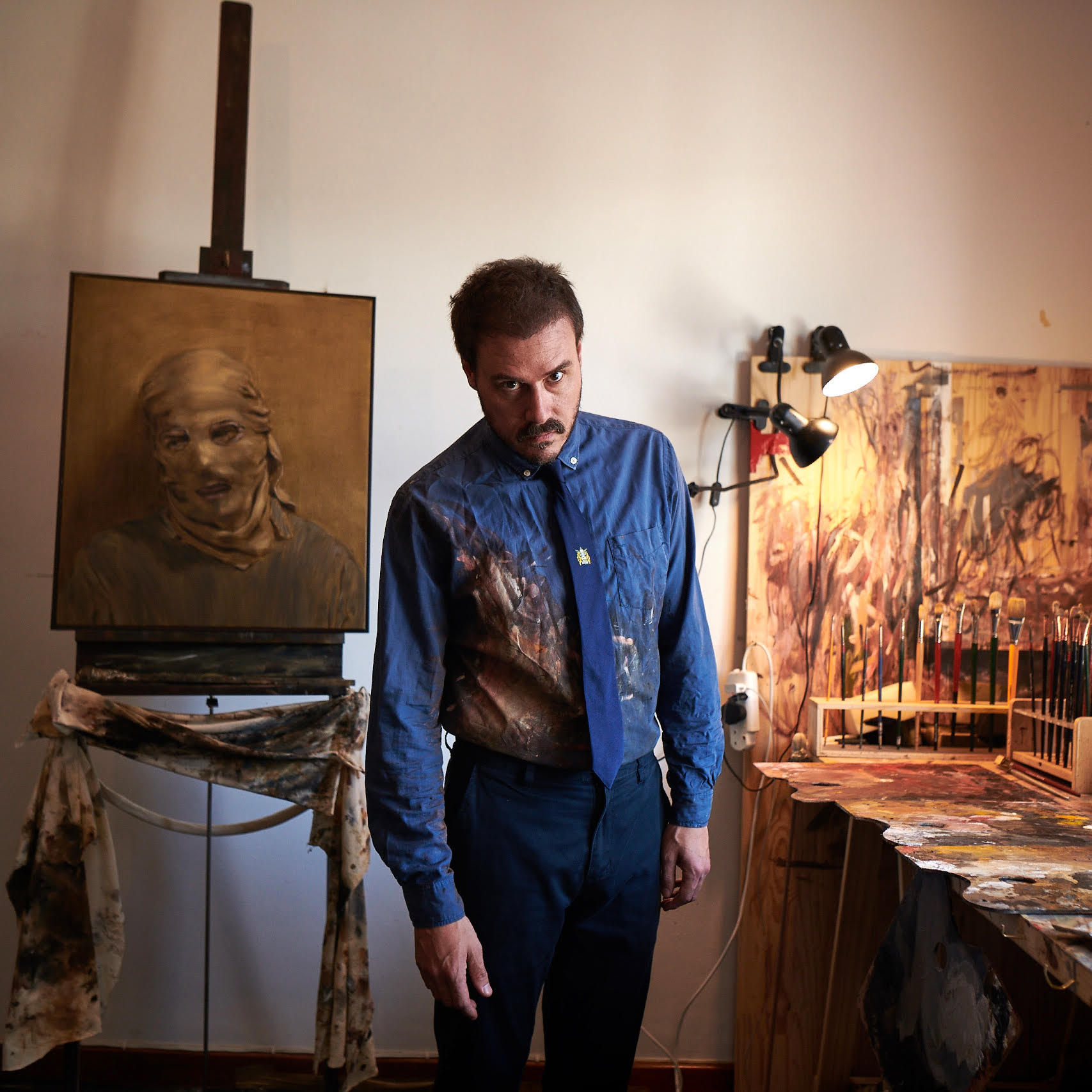 On hearing about NFTs, Daniel Levi’s first thought was: “This could be a great way to afford more paint!” His oil painting, ‘PURE AETERNUS’ is part of Invictus NFT Lab’s Out of Africa collection. While the NFT is an investment in itself, it also acts as a transferable certificate of ownership for the physical piece.

Daniel graduated as a fine artist with honours in painting, and has also left an impression in the director’s chair creating award-winning film work for international brands and bands. His various avenues of storytelling — painting, writing or making films — each require a different approach but he finds they connect through narrative and emotion. “Like a piece of music,” he says. “Stories, images, music all help me make sense of life…to find patterns in the chaos.”

‘PURE AETERNUS’ is from a series of large portraits called ‘Asymmetrical Identities’ which was shown at 131 A Gallery in Cape Town. In it, the faces are concealed by thick paint in bright colours representing human energy. The paintings look as if they’ve been pressed together down the middle while still wet with paint to produce patterns akin to a Rorschach test. “It’s more of me playing lost and found,” Daniel says. “It’s a fun game mostly, sometimes frustrating; pushing and pulling between representation and abstraction. As to what it’s about, that’s up for interpretation.”

We asked Daniel to share some more thoughts on his work and process. 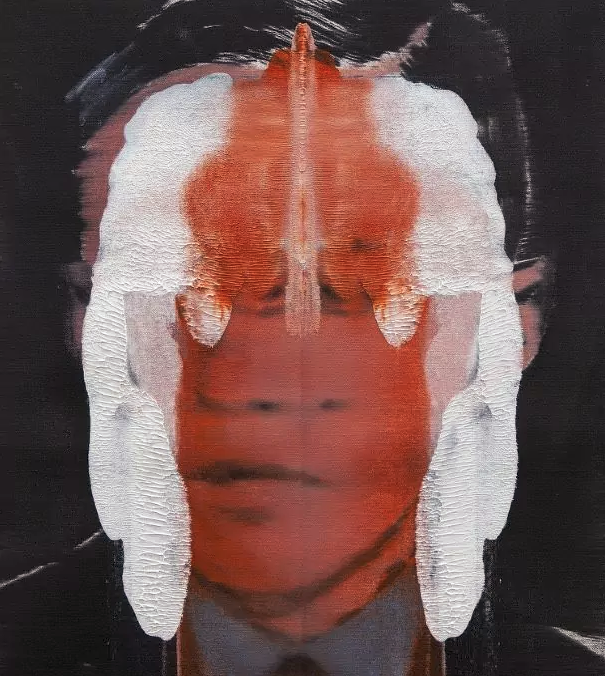 What draws you to portraiture in painting?

It’s not something I can easily put into words. It’s a feeling. Faces are intriguing. Each face is a story. A film director called Irvin Kirshner once said that there’s nothing more interesting than the landscape of the human face. But I’m as intrigued by paint as I am by faces…the more I paint the more abstract things seem to become.

Who are the people you paint?

When I was a student I painted people I knew. A friend. A lover. A family member. It just seemed right at the time. Over time I’ve become less interested in ‘portraits’ and more interested in characters… in archetypes. Ten years ago I did a series of purely abstract paintings. I just painted shapes and played with textures. After some time I was drawn back to painting people but not people I knew personally because abstraction had stuck with me and it didn’t make sense to abstract my friends. What kind of person wants to abstract their friends?!

As a filmmaker, do you think about the worlds the characters from your paintings inhabit or their backstories?

In a sense, I do, but from a less literal mindset to filmmaking. I don’t like it when things get too literal with painting. The process is very intuitive for me. Too much analytical thinking clogs things up. I prefer paintings to feel mysterious. People often ask me about my thinking behind a painting… Who? What? Where? When? It’s natural for people to be curious, but I don’t like robbing them of their own interpretation. It’s better if they find their own answers.

Please tell me about your thought process behind concealing parts of their faces?

There was no clear thought process at first. It was intuitive. It just happened. The experiments in abstraction I had done previously were pulling at me. I was painting, referencing photographs I’d found in historical archives. At some point, I wondered what it would look like if I obscured them, if I abstracted them. I did that and an idea started forming. Their identities started to become less clear and that was interesting…a game of lost and found.

How do you choose and use colour?

I studied colour theory etc. I guess I ingested all of that and now it just happens. I don’t think about it at all. I just look over the tubes of paint, pick up a few and mix up what feels right.

Where do your ideas for new works come from?

The ideas just arrive like uninvited guests, sometimes I want them to stay, sometimes I send them away. Whenever I intentionally think something up it never works. I’ve certainly done that in my life and usually end up with something that’s overly referential or contrived.

How do you start?

If I’m working on a film, I start by writing. If I’m writing the first step is to sit down, put my fingers on the keyboard and churn out a bunch of nonsense. Then things start to form. If I’m painting, I start by picking up a brush and messing around with colours on a palette. I might make a bunch of random brushstrokes on a canvas or on the wall. It’s like doing stretches before exercise. I keep an archive of images that I reference; historical photos, film stills, news photos etc. At some point I’ll rifle through them and pick one that resonates in that moment, then I just try to stay open and see what comes.

As an artist, what interests you about NFTs?

I’m still figuring that out, but I’m hoping to get more paint! 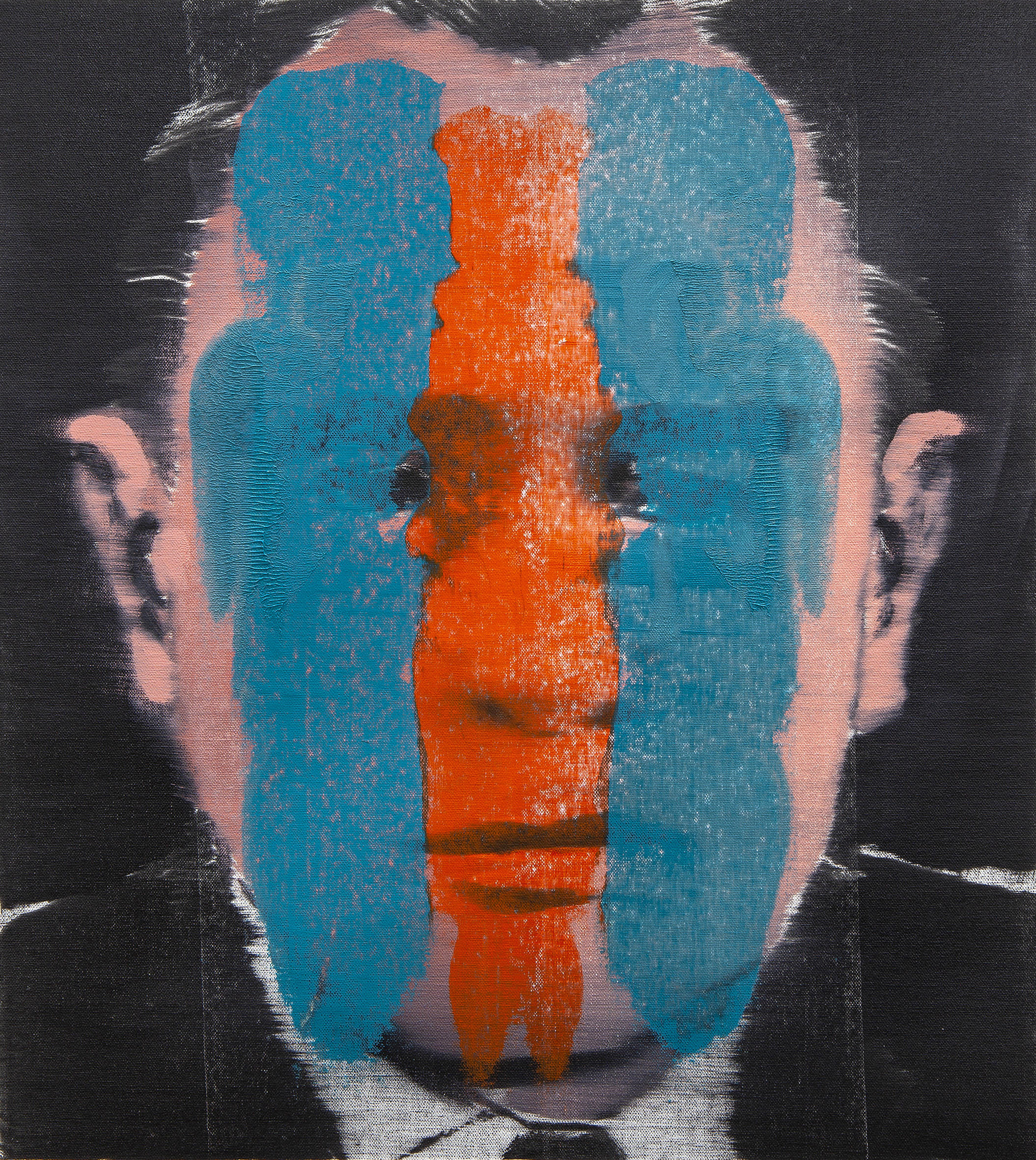 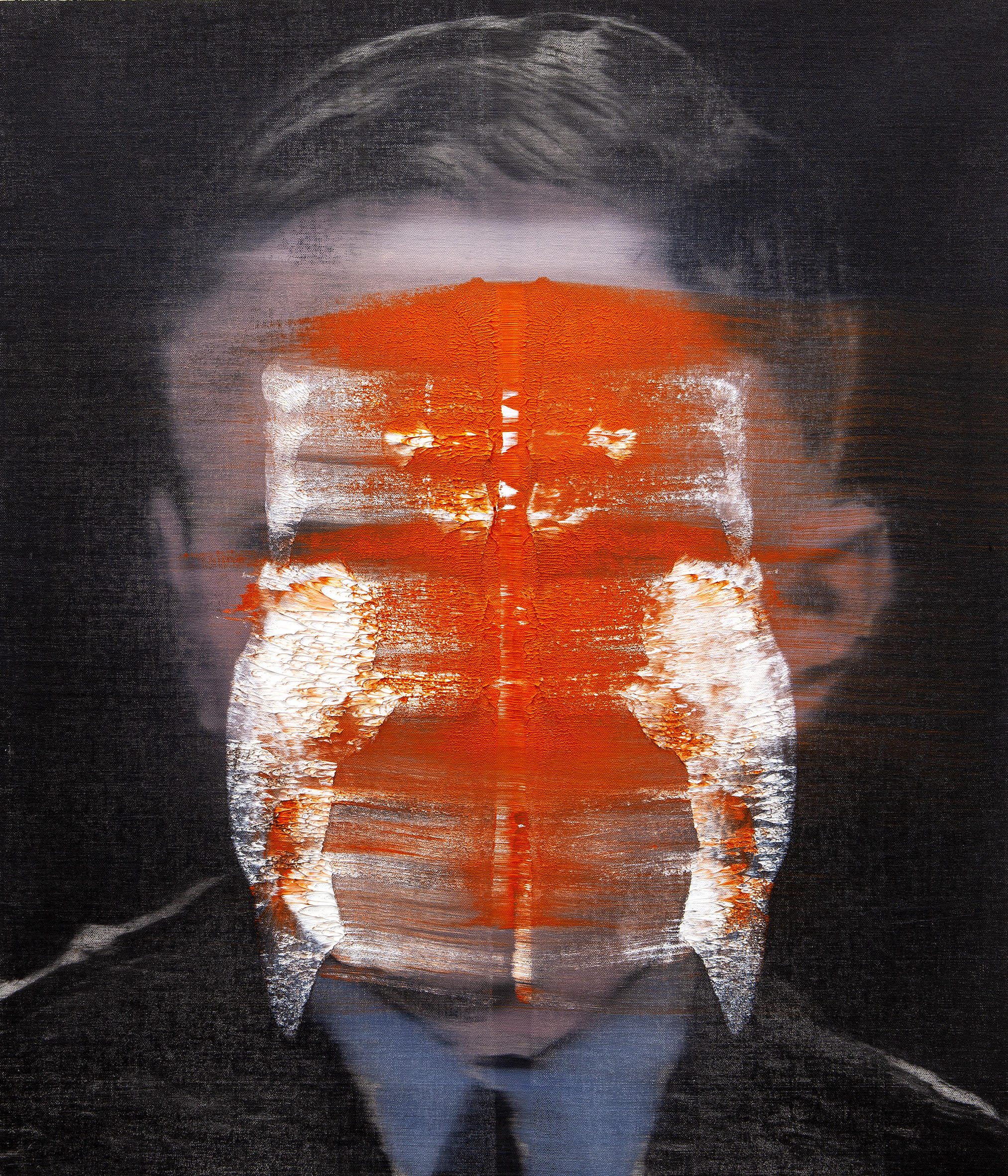 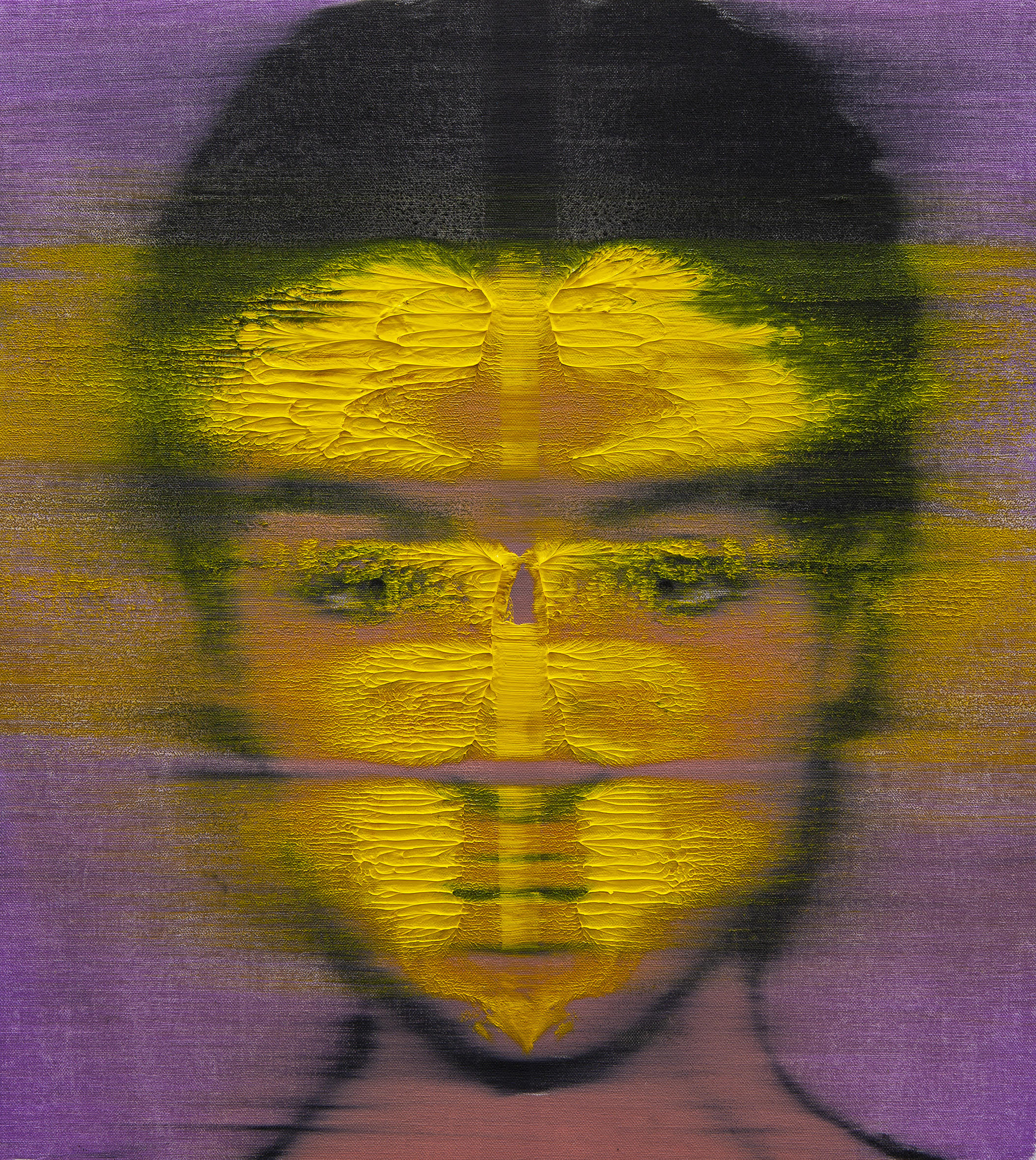 Daniel Levi, SHE, Oil on canvas