Reflections on Paul Emmanuel’s Substance of Shadows, by Mark Auslander

All of us are subject to a double inheritance, bequeathed from our parents and previous generations. We are heirs to a genetic code, embedded in the carbon-based sugars that comprise DNA, dictating, amidst inevitable transcription errors, the biological blueprint of each new organism. We are equally heirs to the configurations of culture, even as culture itself, in the very process of being reproduced, is subject to subtle transformations over time (Paul 2015).

These dramas of biogenetic and cultural reproduction inform Paul Emmanuel’s Substance of Shadows. Painstakingly scraped away on sheets of carbon paper, a now nearly archaic material meant to reproduce written words on a blank page, each work enigmatically retraces a person or object, inevitably punctuated by the imprecisions of the transcription process. Carbon, out of which we emerge and unto which we shall return, highlights that which we share with our antecedents and differentiates us from them. 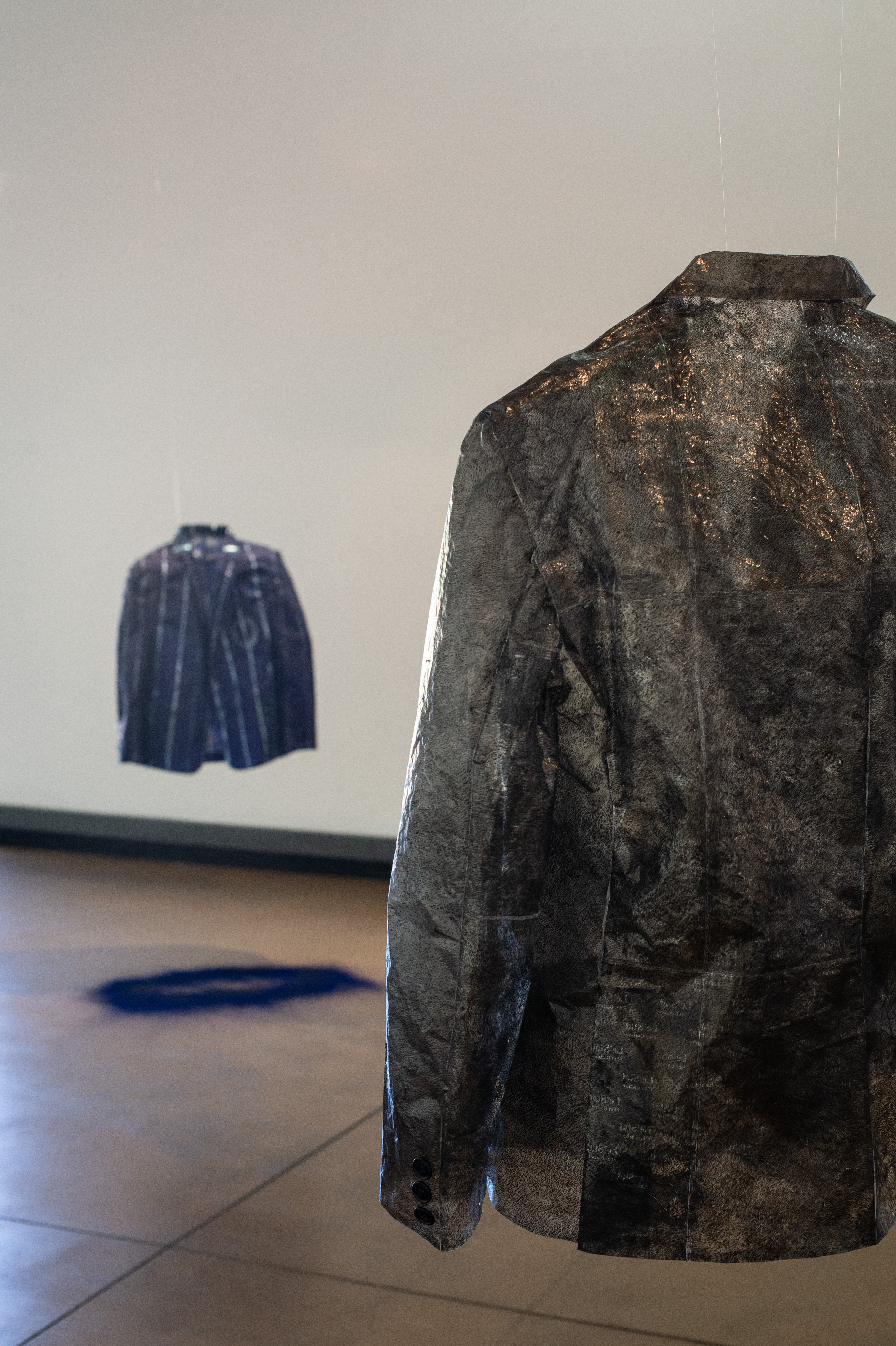 Both Veil 1954 and Carbon dad 2017 take us into the shadowlands of mourning, that strange country where we are challenged, slowly, to detach from the most painful features of our grief while re-attaching to other objects of our love (Klein 1940). Emmanuel ceaselessly labored by hand to rework the blackened surface of both works, scraping away minute traces of carbon to emulate the lace of his mother’s wedding veil and to simulate wrinkles all over his aged father’s naked body, redolent of a relief map of his dad’s beloved, mountainous homeland of Lebanon. Having intimately embodied so many aspects of his parents, the artist, paradoxically, is granted a measure of distance moving forward.

Other works, in turn, ask us to ponder the after-burns of militarized masculinity in South African political consciousness. Rough Collar recalls the ruff collar that was the uniform of the Dutch financial and mercantile elite, evocative of the enormous power of Capital that forged the colonial system from Batavia to Surinam to the Cape. It is equally evocative of the iron ‘rough collars’ within which millions of enslaved people were bound. Now, in a dance with its carbon residue, it becomes difficult to disentangle who precisely is the Master, who the Slave. Rough Collar is a haunting miniature monument to (ultimately fragile) masculine claims to domination, now confined in the closest of quarters. None can escape the shadows of the master-slave dialectic, even as our mortal remains, all made of carbon, return to the dust from which we were born. 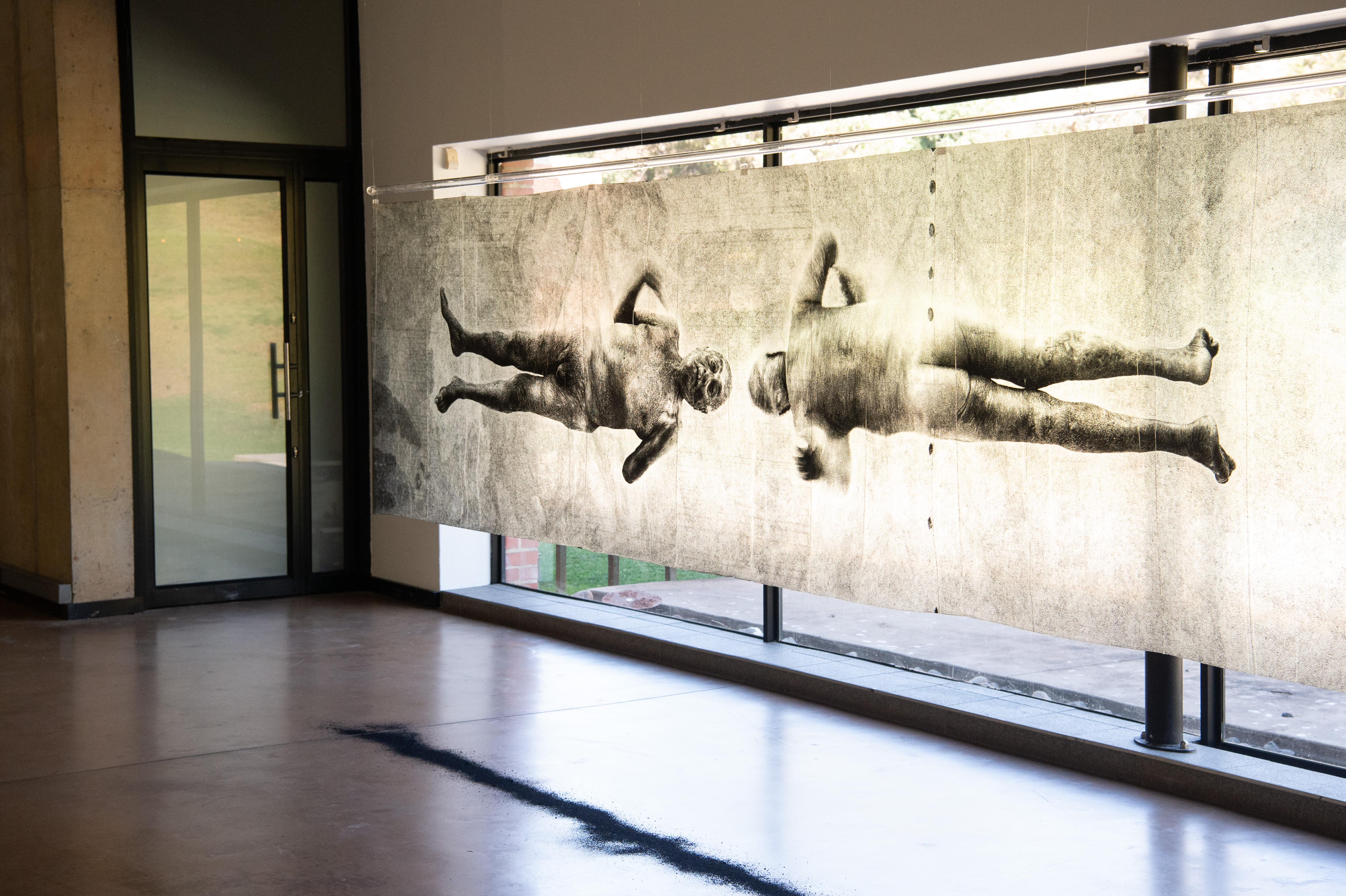 Dramas of reproduced militarized masculine attachment and detachment play out on a larger canvas in the video installation Rising-falling. Each day, the arc of the sun casts shadows over the mounted Boer War hero Louis Botha and relief images of him as warrior and lawgiver. Each night, we glimpse on the pedestal shadowy, projected images of the artist’s body taking on and off the regimented armor of normative masculinity, a military uniform, giving us glimpses from the rear of the vulnerable male body, as naked as the day it was born.

Ex unitate vires also navigates the contradictory traces of successive white male-dominated South African regimes. Following the South African War, the ostensible “Union” of South Africa in 1910, adopted this motto (initially translated as, “From Union, Strength”) referencing the formal integration of the English-speaking and Afrikaans-speaking polities of the region. This “Unitate” masked a fundamental disunion, as the black majority was disenfranchised and stripped of land. Appropriately, Emmanuel’s torso is figured as an archaic national map: the shoulders, chest, right arm and right side of the torso are covered in white, and a lesser portion, primarily the left arm and left midriff, remain black. 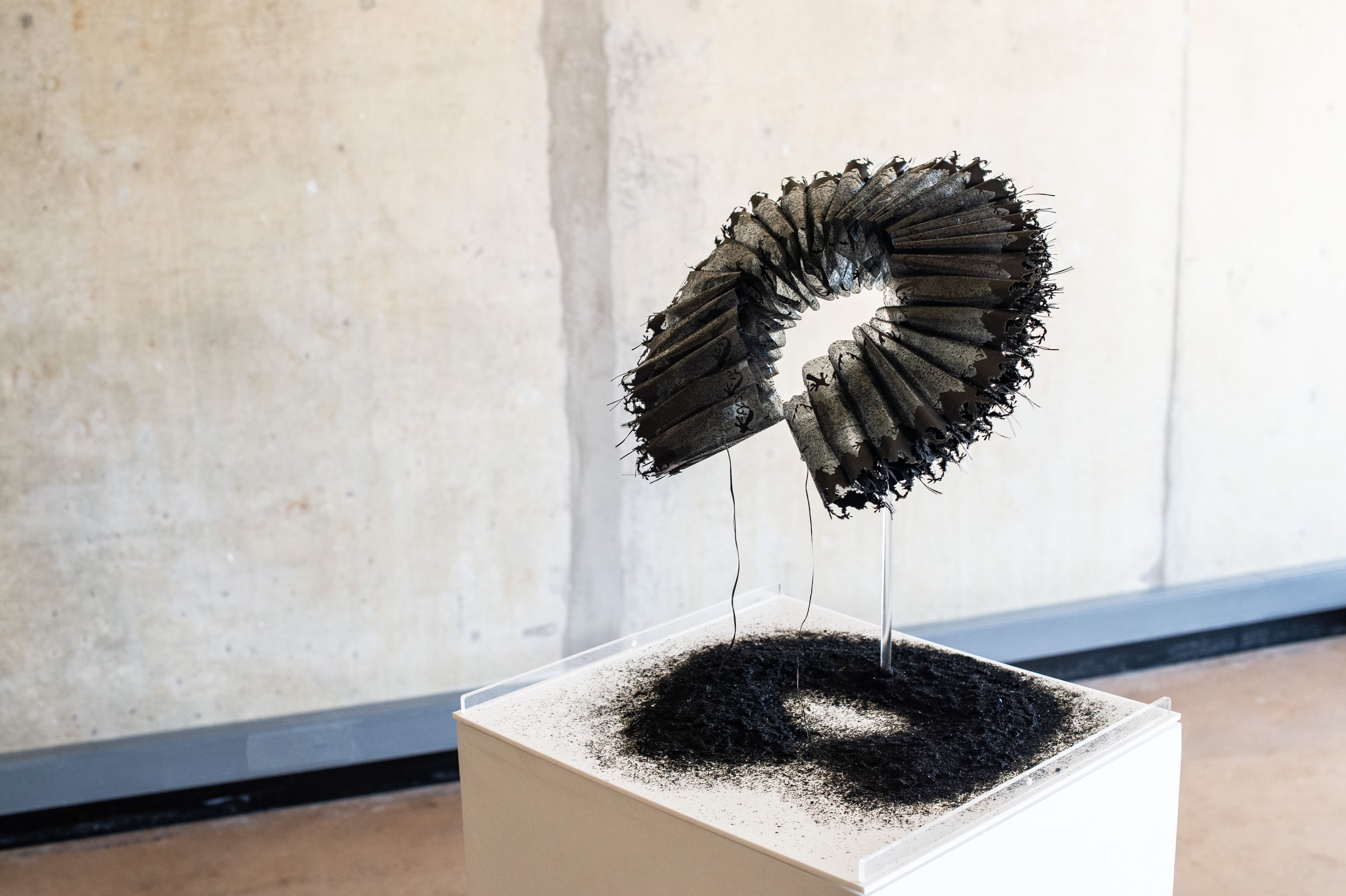 The erect torso recalls generations of South African soldiers, of different races, sent into battle in Europe, southwest Africa, and in the townships on behalf of this national project. The work equally renders visible systematic violence perpetrated by apartheid-era security forces on actual bodies (primarily, but not only, black) in the name of the principles of Unity and (masculine) Strength.

Having said that, the work also subtly evokes the post 2000 national motto ǃke e꞉ ǀxarra ǁke (ǀXam: Unity Through Diversity). The indigenous Khoisan phrase, as noble as it is, remains in a sense unknowably embedded in an ancient landscape that long proceeded the imposition of European demarcations. Radiating out from the formally designed Coat of Arms over the torso’s heart, the constituent floral elements of the seal gradually dissolve, like blossoms blowing across the landscape, growing ever fainter as they reach the most blackened (perhaps indigenous) expanses of the body’s extremities. It may be that the springbok, gemsbok, and lion, confined for nearly a century within the baroque confines of the Coat of Arms’ heraldic conventions, are themselves breaking free and leaping across an unconstrained landscape.

Perhaps that is what is being recovered through Emmanuel’s nearly magical form of automatic writing on these fragile sheets of carbon, the foundational element of organic life. These works reproduce both the burdens passed on from the past as well as the miraculous possibilities of rupture, detachment and re-fashioning of the self. We glimpse a return of that which was long effaced by colonial schemas of representation and signification, apprehending the resurgence and springing forth of other ways of knowing, which our bodies still retain sensible access to, against all odds, across the layered sheafs of time.

Klein, Melanie (1940). Mourning and its relation to manic-depressive states. The International Journal of Psychoanalysis, 21, 125–153.

Written by Mark Auslander, PhD, a social anthropologist, is a research scholar at Brandeis University (Waltham, Massachusetts, USA). He has undertaken ethnographic and historical research in Zambia, South Africa, and the American South. He is the author of the book The Accidental Slaveowner: Revisiting a Myth of Race and Finding an American Family (University of Georgia Press, 2011) and other works on history, race, enslavement, political consciousness, ritual performance, museums and art. His curatorial experience includes exhibitions on slavery, liberation and memory in university settings; contemporary African and diasporic art; and explorations of heroin and homelessness.