A feature by Ashraf Jamal for ArtThrob

Duchamp’s piss pot, aka Fountain, is over a hundred years old. A stone-cold prank – art as ready-made – it survives today as a limited-edition replica, the ‘original’ work, rumour has it, accidentally tossed out with the garbage. First exhibited in 1917 as part of the Society of Independent Artists, it did not inflict the sting it was intended to. That would come years later. In retrospect, Duchamp’s Fountain is considered a major work of the twentieth century. I saw a replica on the 5th floor of the Pompidou, which houses the greatest concentration of art from the first half of the European twentieth century. Found objects, rebooted or just so, set the tone for the age of mechanical reproduction in which anything and everything becomes art – in South Africa a brick (Kendell Geers), smashed windscreen (Rowan Smith), China bags (Dan Halter). 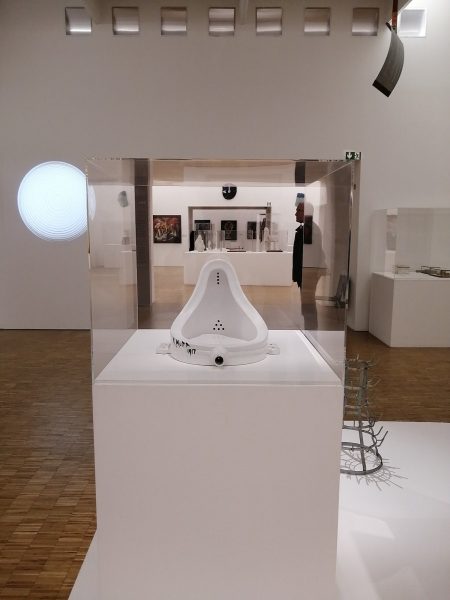 If context matters, then what better place to install machine hewn and man-made things than a white cube? A joke, or driving concept, art of this ilk was designed to spook, rankle, or outrage. Not anymore. Materialism, material ecology, matter or stuff, is both a fresh and stale normal – perennial and banal. This is because we cannot look at things, at anything, without adding the word ‘art’. Jeff Koons magnifies the ordinary. Gigantism is no longer a rage but a disease that has metastasised. His colossal, glittering, self-reflecting and self-regarding objects have come to represent a horror of our own making – anthropogenic, Anthropocene. 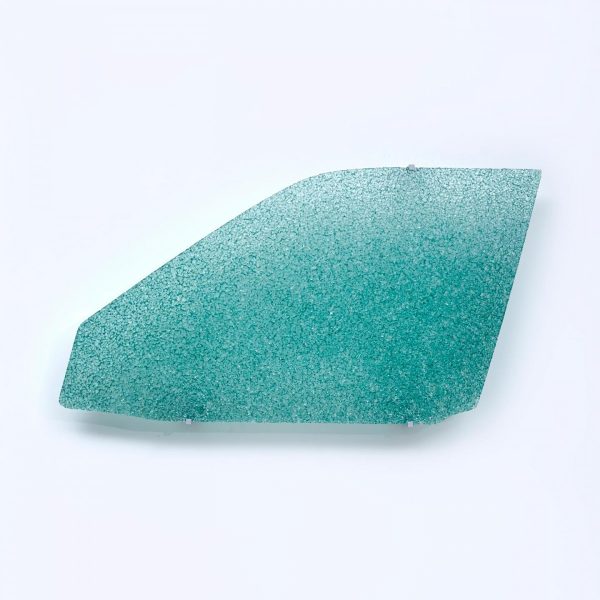 Man-made things, irrespective of scale or finish, are fair game. Prior to lockdown, Andrea Lewis curated ‘Matereality’ at the Iziko National Gallery, a stunning group show in which the man-made assumed centre-stage. An excerpt from Jean Baudrillard’s The Consumer Society (1988), white against a turquoise wall, served as its conceptual trigger: ‘Strictly speaking, the humans of the age of affluence are surrounded not so much by other human beings, as they are in all previous ages, but by objects … We live by object time: by this I mean that we live at the pace of objects, live to the rhythm of their ceaseless succession’. 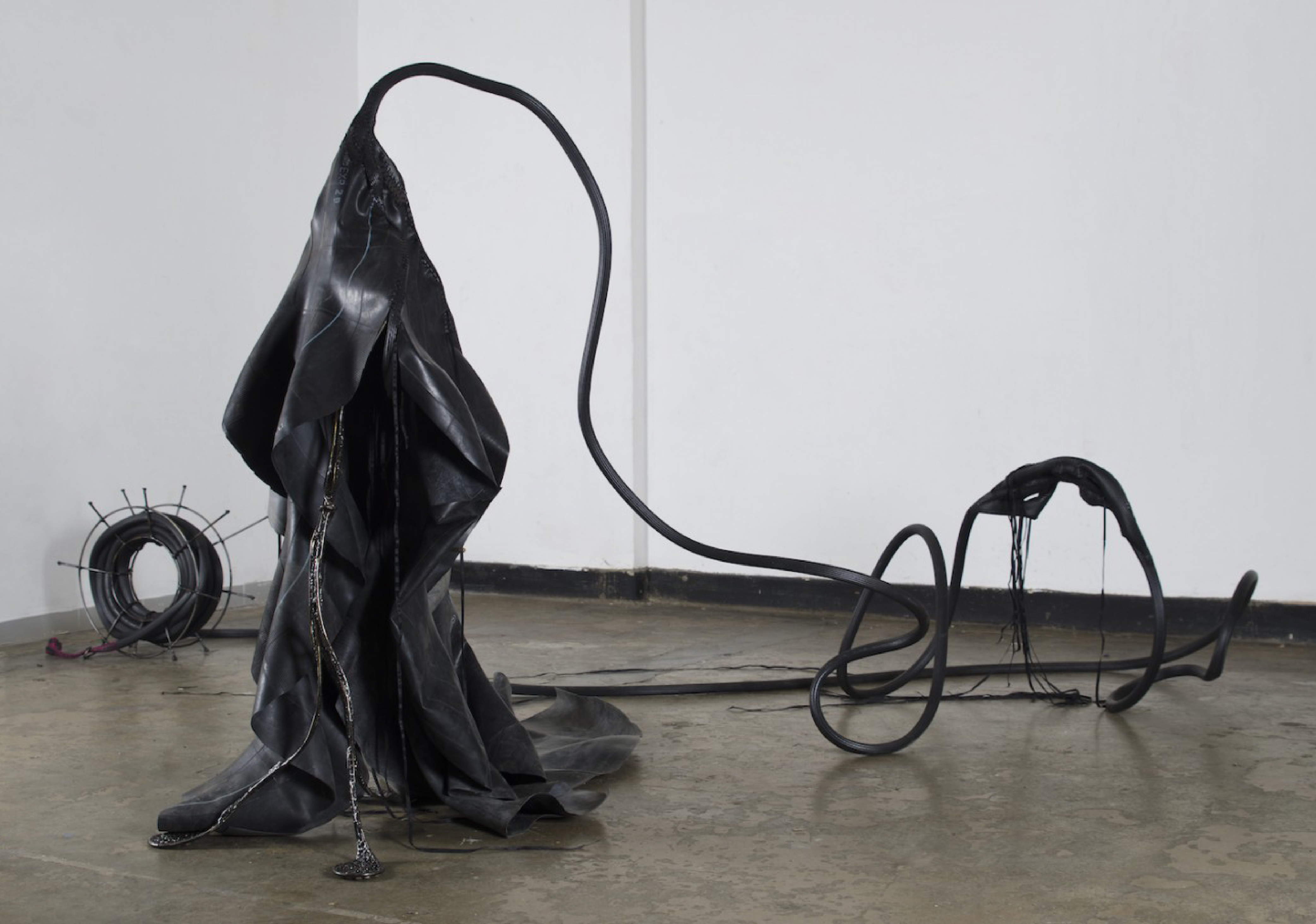 The objectification of everything, including people, signals our march towards dehumanisation. Inextricably bound up with things, prosthetic extensions thereof, we have come to know ourselves and others acquisitively. We collect likes, empower and fetishise things. But if Lewis’s show was a marvel, it was because it deepened the dialogue and recovered the human within the inhuman. Chris Soal and Usha Seejarim’s fields of toothpicks and clothes pegs quickened the spirit, Nicholas Hlobo’s clunky rubber turbine and Cyrus Kabiru’s nonsensical bicycle delighted. Francois Knoetze’s ogre, made of shot circuit boards and demented tangles of flexed wire, reminded me of a Nam June Paik on a bad hair day. Lisa Grobler’s nuclear green threaded tumour summoned dread. Kresiah Mukwazhi’s lattice of taut bra straps, shorn of their cups, was a thing of horror and unutterable beauty. 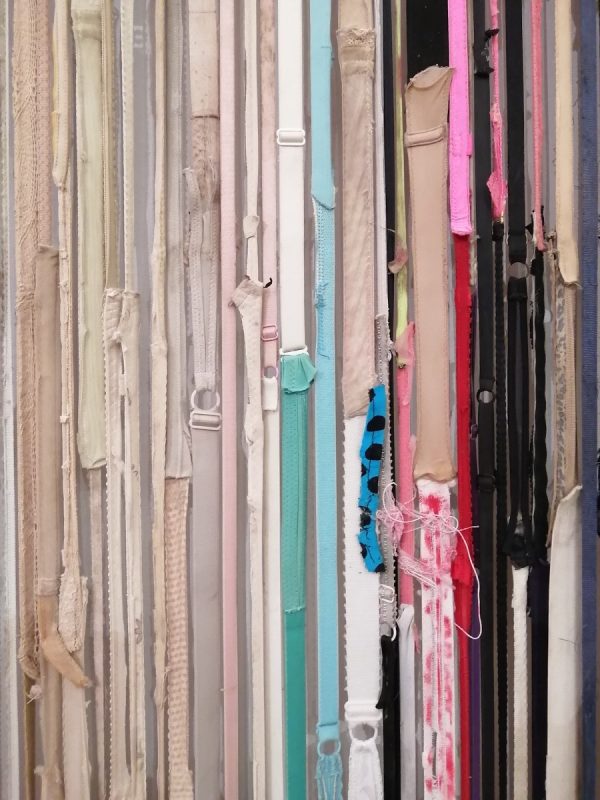 ‘Matereality’ – a neologism which compounds matter and reality – is a global fixation. Its defining force, today, is not the ready-made, and the conceit it inspired, but Arte Povera, or poor art, a movement conceptualised by Germano Celant, which emerged in Italy in the 1960s. It is this movement which Lewis’s show enshrines. The inverse of a Duchampian cold conceit, or Koonsian bling and pop, it speaks to the abraded, discarded, negligible and invisible. If Mukwazhi’s bra straps, tautly strung and framed, is for me its triumphal latter-day expression, it is because she has eloquently scanned the toxic complex of sex and power. More deeply, she probes consumption as the by-product of waste. This understanding, which examines waste as the true theme and condition of life, runs radically counter to one that imagines waste as a mere fallout of our excesses. In Boesman and Lena, Athol Fugard gets to the crux. As Boesman notes, ‘We’re whiteman’s rubbish. That’s why he’s so beneukt with us. He can’t get rid of his rubbish. He throws it away, we pick it up. Wear it. Sleep in it. Eat it. We’re made of it now. His rubbish is people’. Waste is integral, systemic, and, in South Africa, a society more unequal than any other, brutally biopolitical.

If Arte Povera remains the most significant art movement today, it is because it has made our excesses its seam and theme. At the AVA in Cape Town, Warren Maroon has chosen to hold fast to an object world and object time. After Baudrillard, he asks us to reflect on why human life matters little, why it is easier for us to reduce human beings to things. His ‘retrospective’ – an odd declaration, given that this is his first solo show – is titled ‘Living in a box’. The phrase comes from the Hard Livings gang, criminals shaped by the brutality of life on the Cape Flats. Violence courses through the works – a claw-hammer wrapped in a shroud, switchblades snagged in bricks, sledge hammers too, a rusted burglar guard encased in glass, windows sprayed with mirrored reflector paint, chess pieces in brown and white, the brown king a bottle neck, the puce-brown pawn a strung bundle of matches, the white king and pawn clear glass, because as the Cape Flats poet, Nathan Trantaal, reminds us, ‘wit is nie a color nie’. However, it is not the transparency, immunity and impunity of white power which exercises Maroon, but the lives of those disenfranchised, abused and neglected, thrust to the raw and brutal periphery of existence. 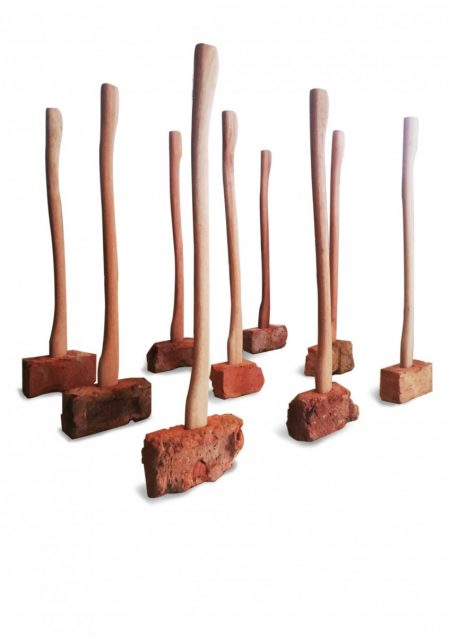 Murder is commonplace in Maroon’s world. He witnessed his first killing aged eleven. ‘When you hear a gun-shot you run towards it’, he says. Slaughter on the Cape Flats is magnetic. But what compels him are the objects and signs of death, destruction, inexistence. Unlike Duchamp, Maroon is not concerned with the banality of everyday things, but their dark freightage. His objects are weaponised, they carry destruction. It is not only consumption as an extension of waste that concerns him, but the all-consuming nihilism built into things – the Cape Flats as a factory for death, a place in which people, denied value and purpose, trapped within an annihilating crossfire, are reduced to states as abject as they are damned. This is also Fugard’s point. What happens when a violent and cruel system reduces those, deemed lesser, to ‘rubbish’? It is not austerity that drives Maroon, but obscenity. The human as abject object. If life on the Cape Flats is meaningless, it is not because it lacks meaning, but because it is deprived of it. 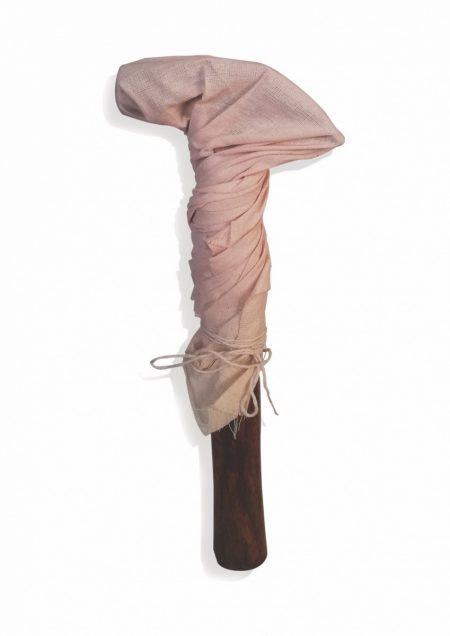 If ours, after Baudrillard, is an ‘object time’, a time determined by things which seduce and hurt, things which murder and destroy, if ‘we live at the pace of objects, live to the rhythm of their ceaseless succession’, it is because ours is an end time, null and void. And yet artists remain to remind us how, through things and their transubstantiation, we can begin to thrive. Andrea Lewis’s show at Iziko in February 2020 was exemplary in this regard, as is Warren Maroon’s solo show at AVA. Maroon tells me a story. A young man is murdered in the clear light of day for all to see. The murderer wraps the gun in a cloth and gives it to a six-year-old boy and attaches to this bleak exchange a single word – ‘verdwyn’, disappear. Nothing, truly, disappears, and yet, perversely, it can and does. Picture a wrapped gun in a six-year-old’s hands, the weight, the heat, the menace. Does a white enamel urinal on a white plinth matter anymore? What do objects tell us now? And how can they save us?

This article was first published in ArtThrob