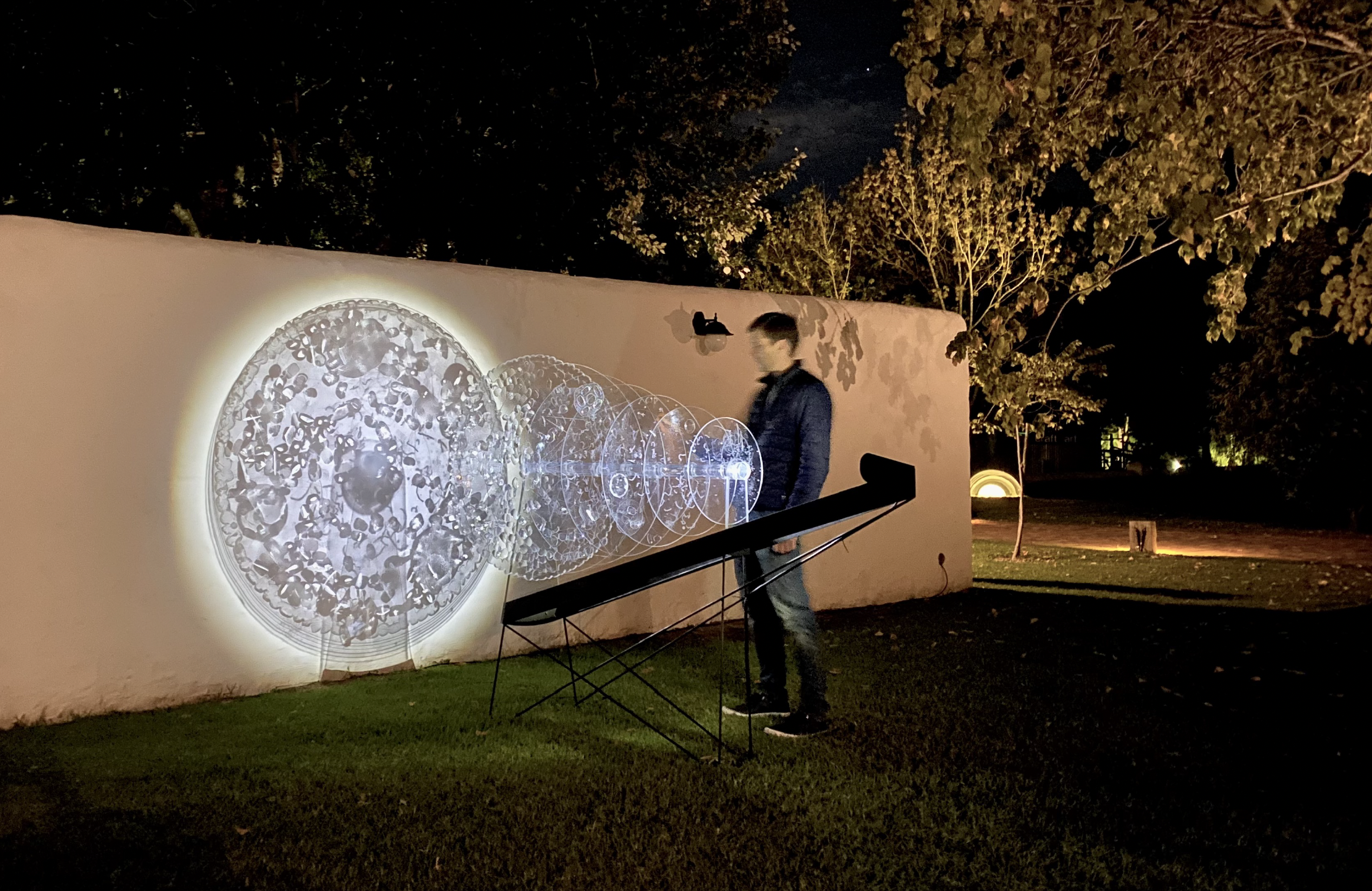 Nicola Taylor, A Place Inside Time and Space

From 18 March to 18 April 2022, visitors to the fourth annual Spier Light Art will experience an array of light, sound and video artworks throughout the farm.

In Nicola Taylor’s two light sculptures, illumination and shadow are taken as fundamental to life itself. Her works for Spier Light Art, Internalising ‘Other’ and A Place Inside Time and Space, use the balancing act between two polarities to speak to scientific principles and natural laws: the mystery of consciousness and how life begins. Taylor’s work has always been concerned with nature and humans, and the false division between the two. In these works she proposes that by healing this separation and connecting to nature we may begin to understand ourselves as part of a community, in relation to each other and in relation to the universe. 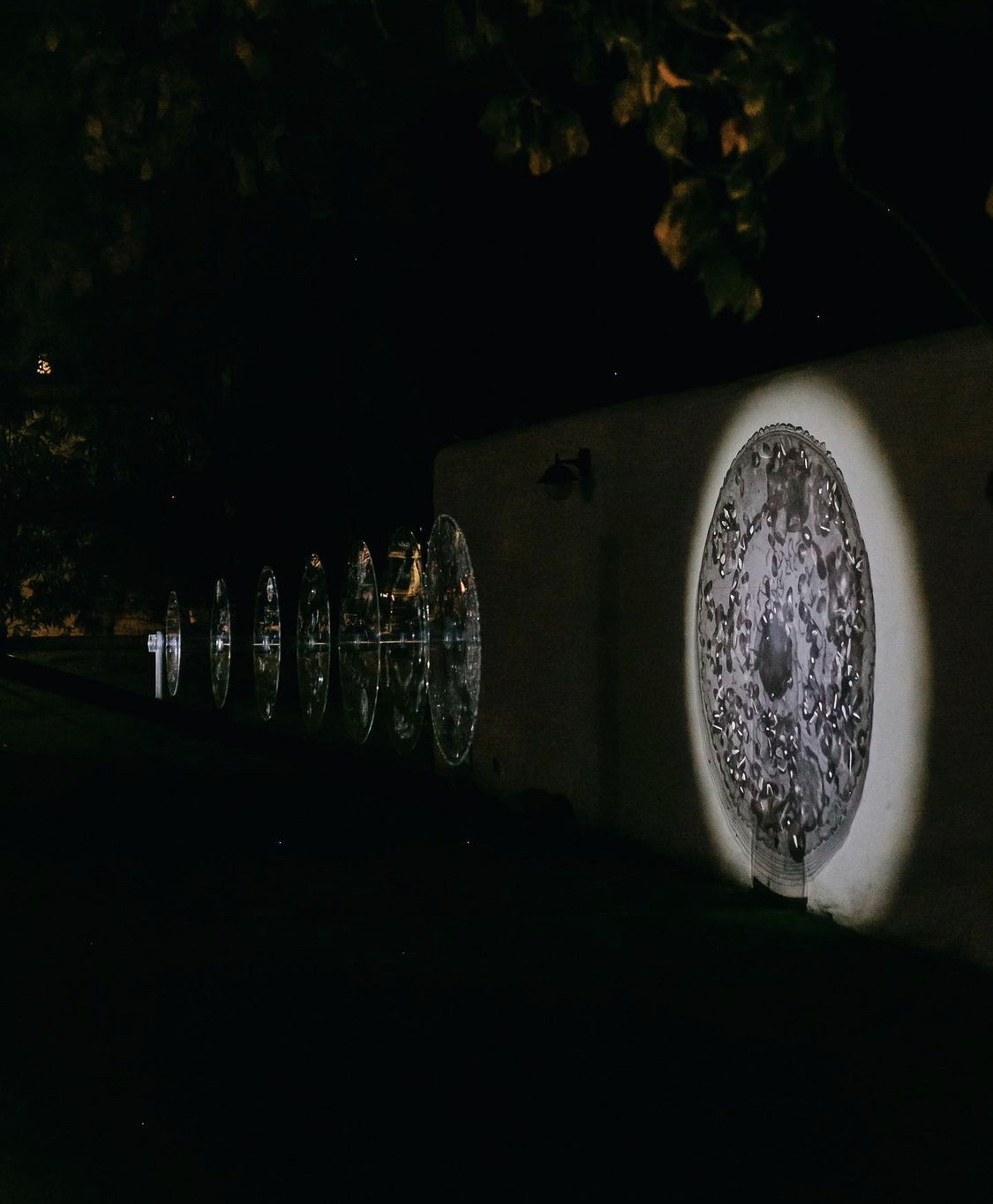 Nicola Taylor, A Place Inside Time and Space

A Place Inside Time and Space is the work which represents a reality generating mechanism. A series of seven Perspex discs, inscribed with marks and drawings and, in places, embedded with discarded eyeglass lenses, the work inquires after scientific properties and laws: “I want to understand the structure of things and how they fit together,” Taylor says.

Representing consciousness, a bright light is shone through the sculpture, complicating, refracting and diffracting light as it passes through each disc. The discs increase in complexity as they grow bigger, and are etched with constellations of stars and data points, drawings made by Taylor while doing a body scan, signs and symbols associated with the physical properties of the natural world. 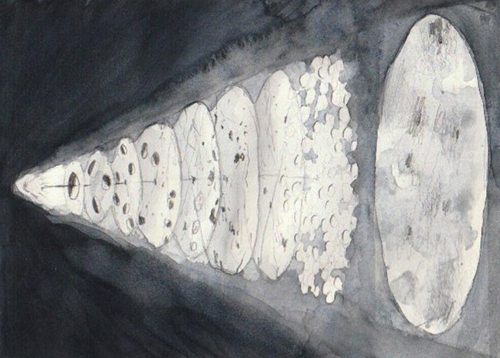 Nicola Taylor, Conceptual sketch of A Place Inside Time and Space

Of the process of making A Place Inside Time and Space, Taylor speaks of its playfulness: needing, before anything else, to hold something up to the light and see what happens. Her videos of the process – the delight she has taken in moving something slowly through sunlight, in the complex patterns created by an uncut lens, the effects of light on tiny etched marks – all deepen the richness of the work, and prompt us to take delight in the same things. In situ, the discs spin and turn on a central axis, responding to interaction. Inviting people to play with the light - as Taylor has had to play with the light, in order to make these works – the work alternately reveals and conceals its subject, never excluding the viewer from participation. 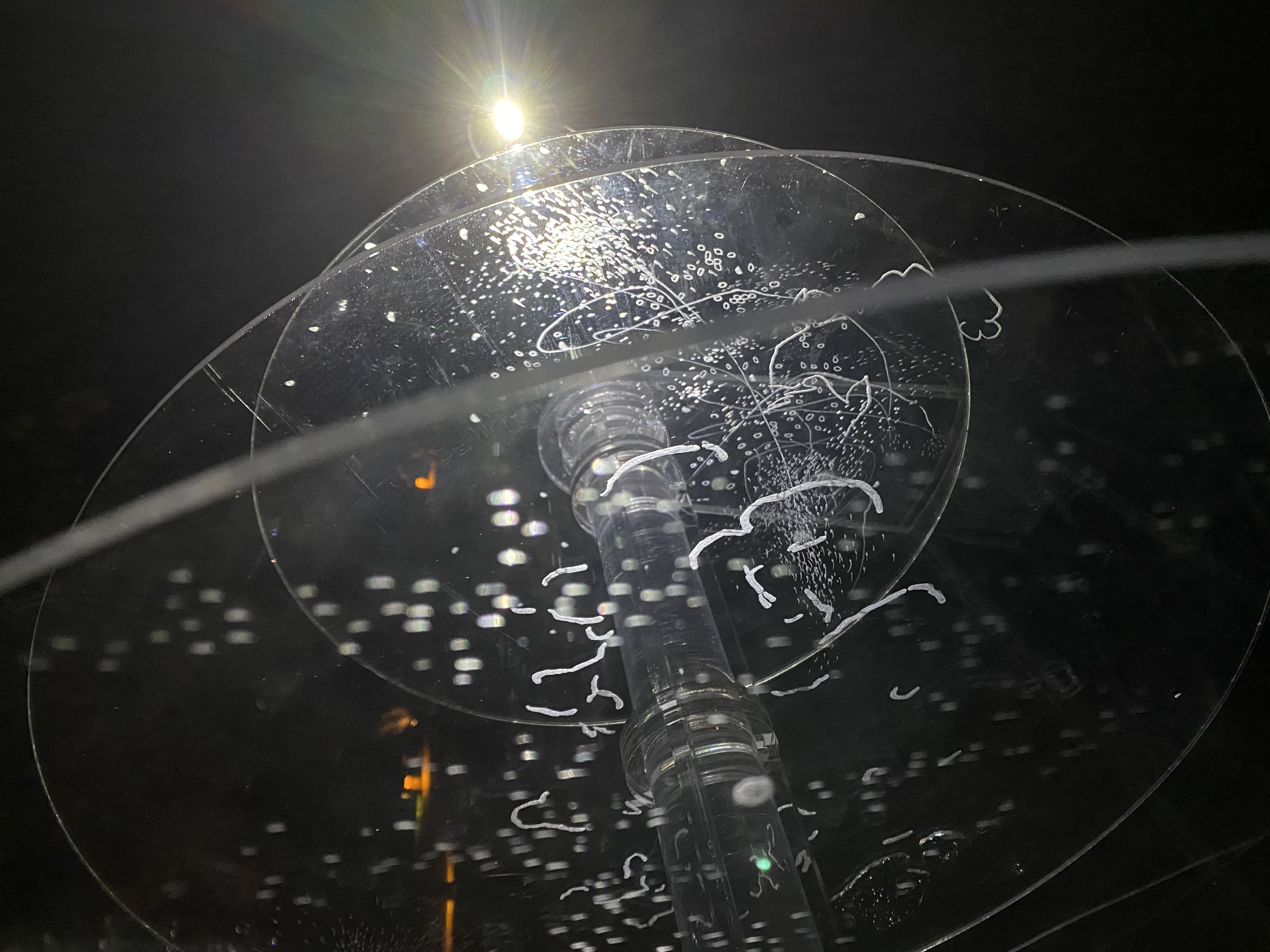 Nicola Taylor, close up of A Place Inside Time and Space

Internalising ‘Other’ is the second of Taylor’s works for Spier Light Art, and shares a thesis with A Place Inside Time and Space – the balance between light and shadow. A large sphere partially embedded in the ground, the work has no apparent light source. Instead, a cleverly engineered system allows it to glow with an otherworldly light: from afar, it appears to have a halo. Of its form, Taylor speaks to moons, femininity, unknown and unknowable spaces, primordial soup. “What I do - and have always done - is try and figure out where I fit in, and where I belong,” she says. This interest in belonging – and, by extension, in the differences and similarities between people – is visible in Internalising ‘Other’. As in much of Taylor’s work, the balance of opposites is crucial: here, she links it to the scientific principle of relativity, which necessitates a construction of “self” and “other”. 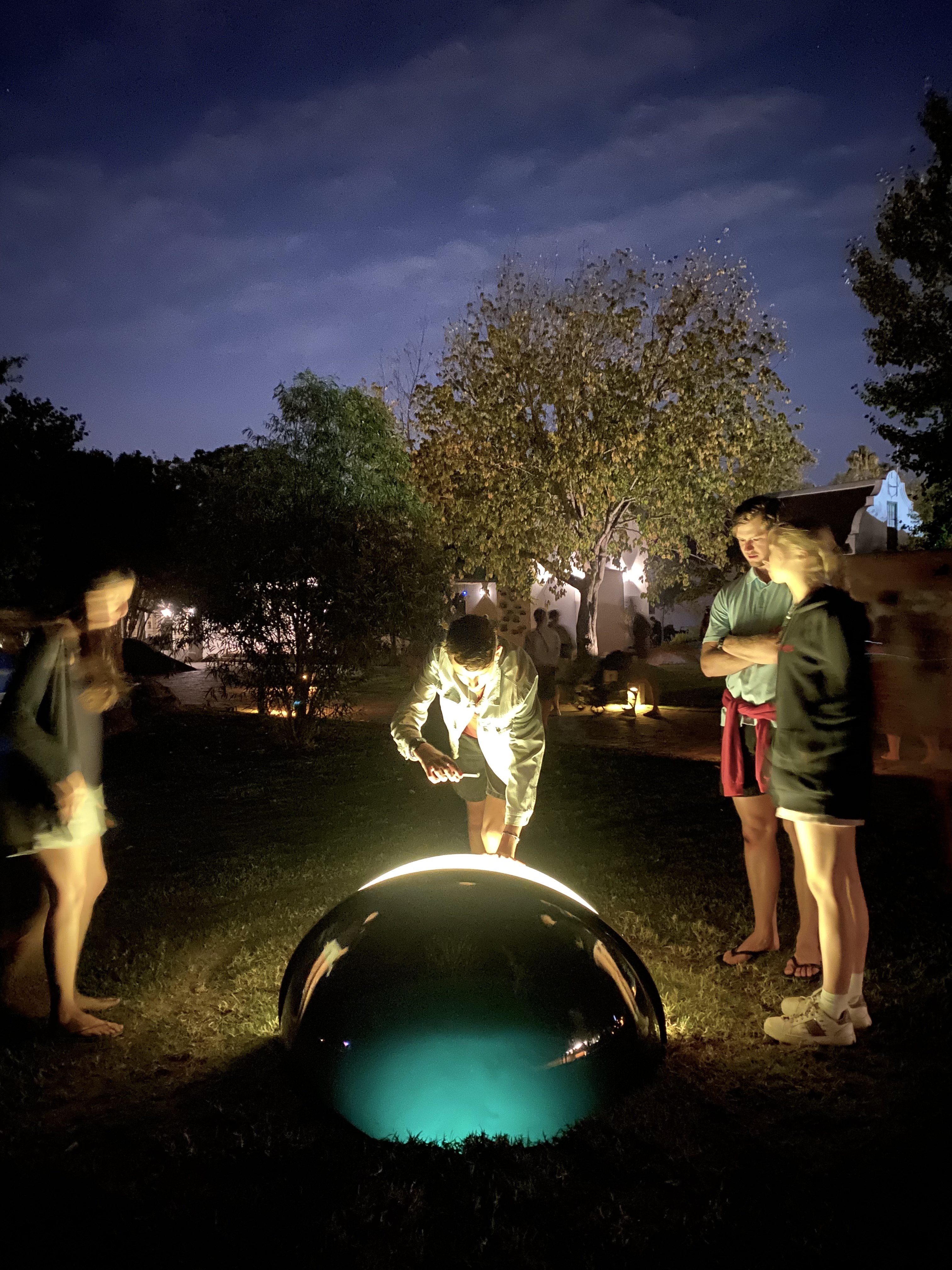 Both Internalising ‘Other’ and A Place Inside Time and Space operate at the surface tension point between illumination and shadow, where day becomes night. The membrane which separates opposites wears thin in these works. “It’s a property that is required for life to exist – the balance of light and dark,” Taylor says. By finding ourselves in the space between the two, the works suggest, we may better emphasise with each other, and with ourselves. 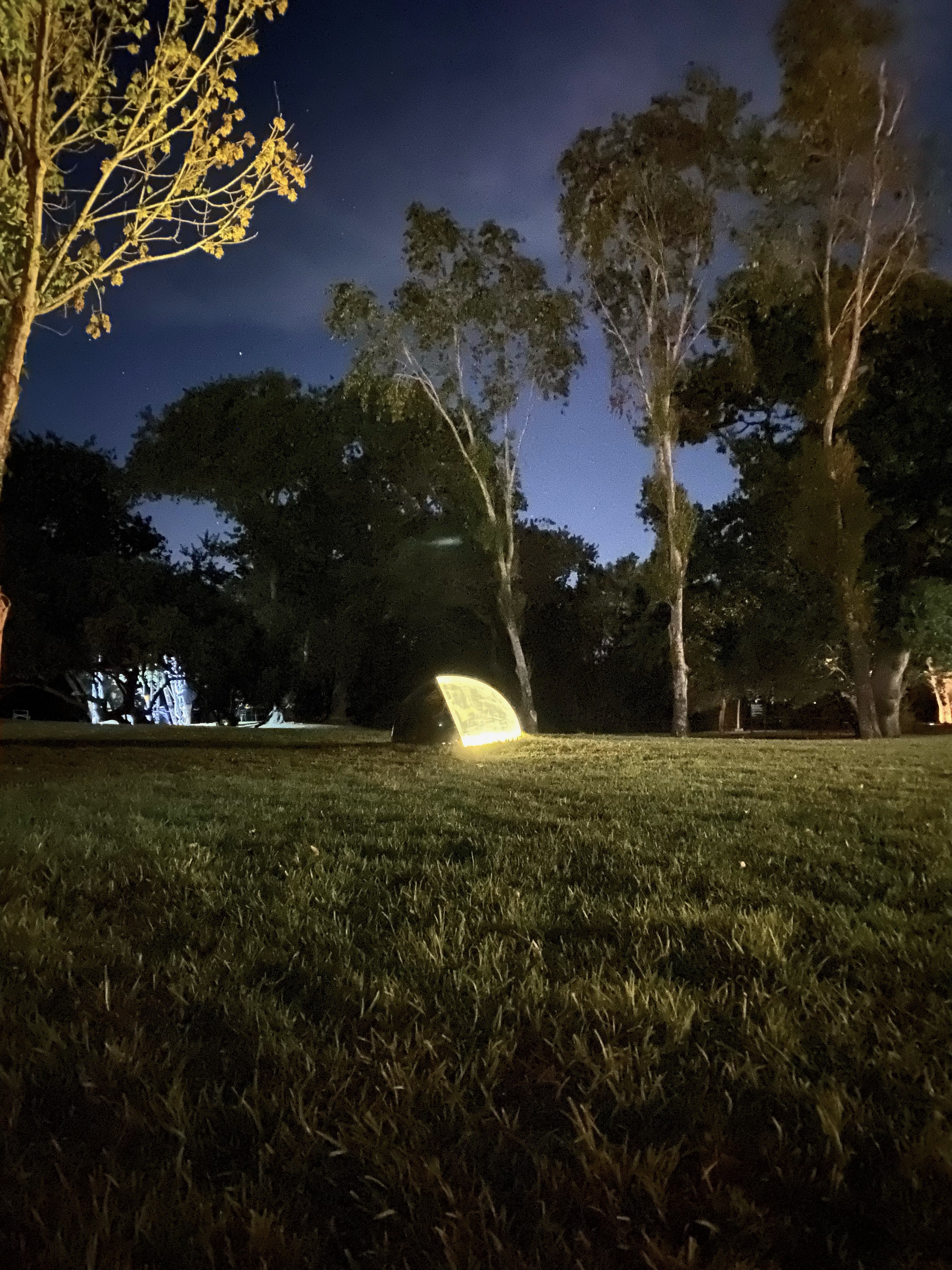 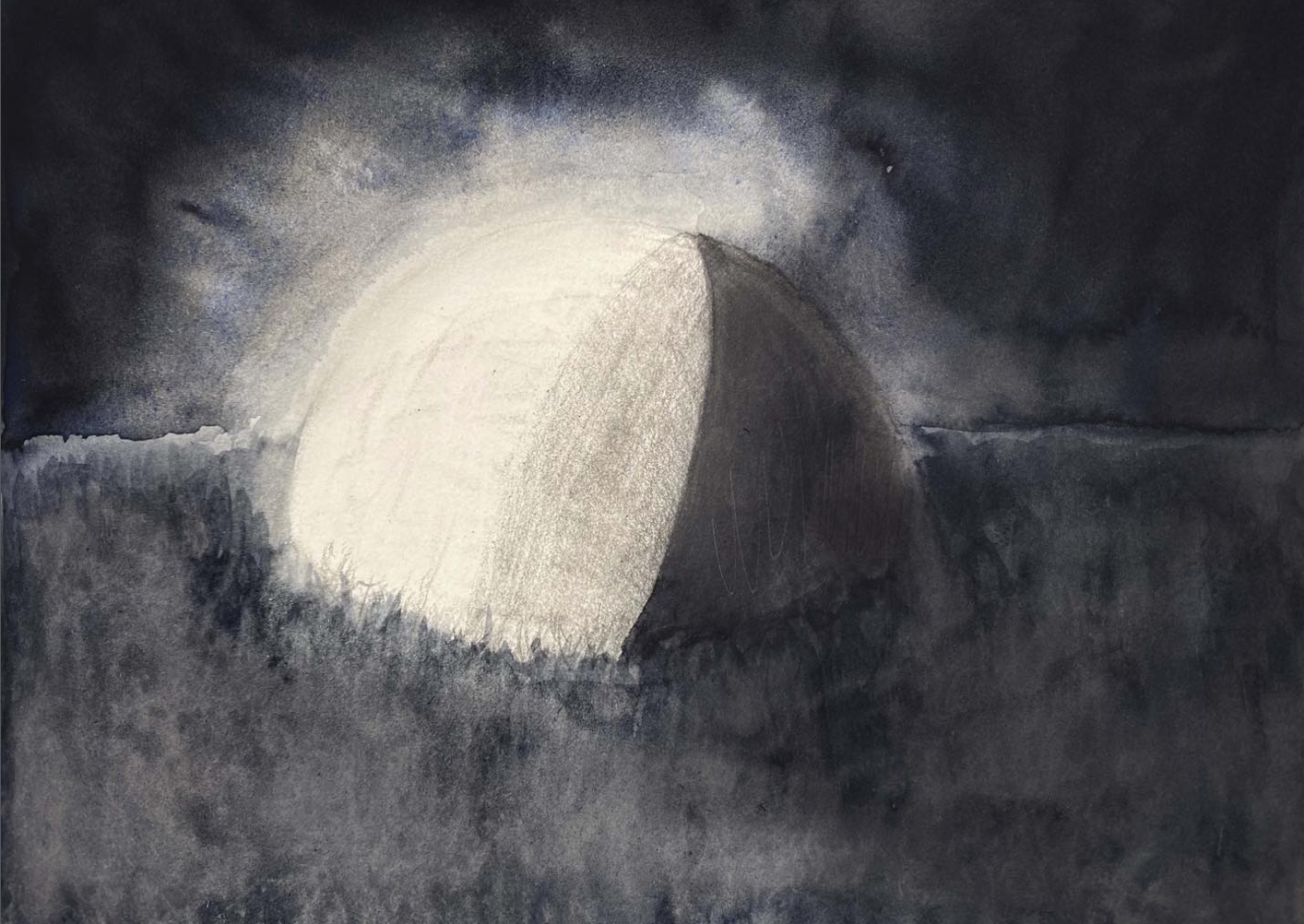