NEW SHOW | LOST IN THE CROWD

Browse and buy from the show, here.

It was in 2008 that this American-born artist discovered Africa, Malawi in particular. There she tirelessly painted the people she saw around her. Other trips would follow, Haiti, Bangladesh, but in 2016, she settled in Kenya, where she now resides. While she has recently begun to paint landscapes, Olivia Pendergast's favourite theme is the portrait, the figurative in the most literal sense. She captures "ordinary" people in their "quotidian" activities and makes them enter our visual field with ease. She saw a taxi driver, a man seated on a chair, a mother with a child; she painted them, as she saw them, without pursuing seduction, neither from the model nor the observer. 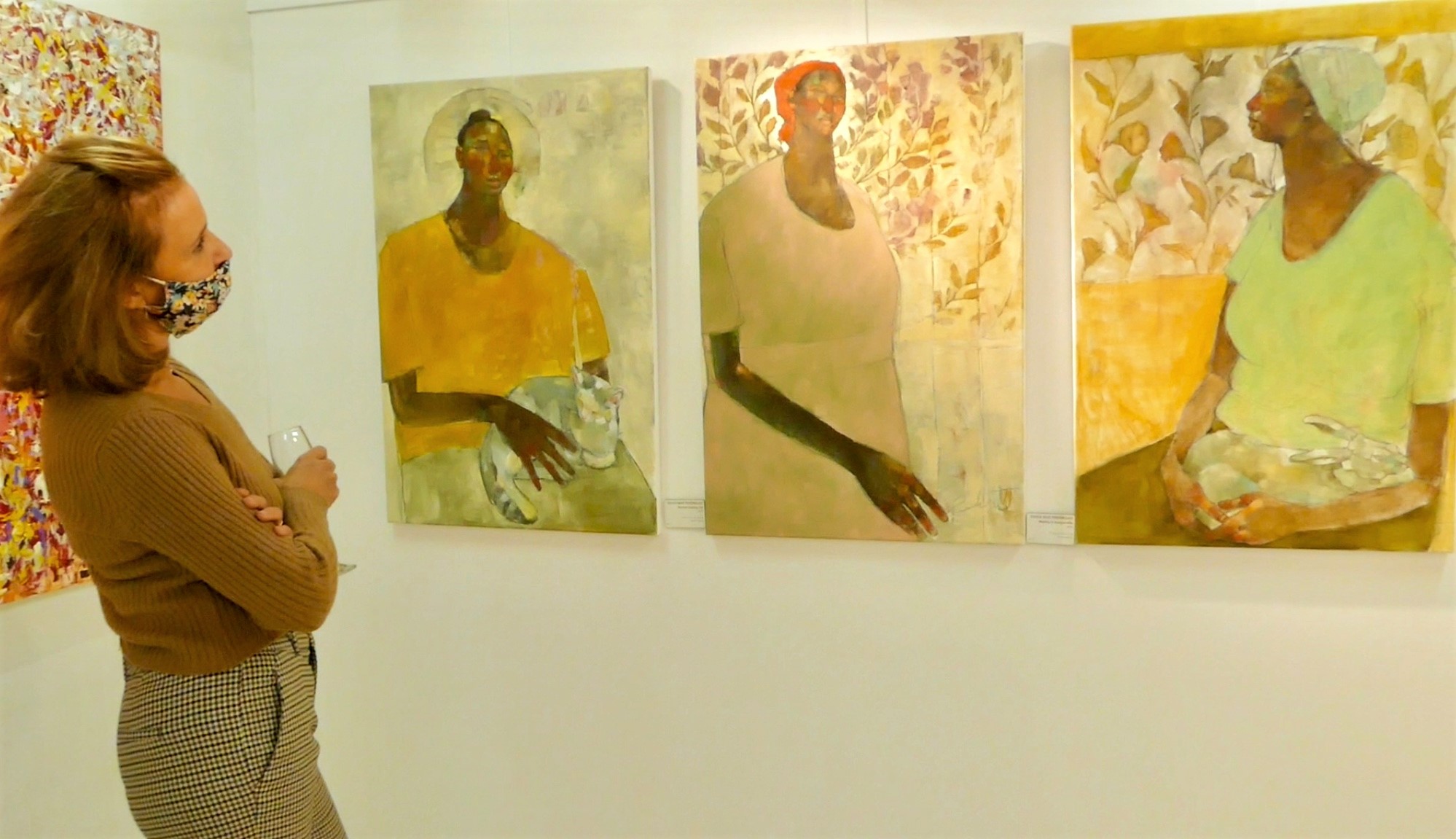 Pendergast is an experienced artist. She completed her BFA at Columbus College’s five-year Art and Design program and began exhibiting her work in 1999. She first worked as a conceptual designer in the film industry in Los Angeles for five years after which she left California and retired to the mountains of Utah to paint full time. In 2007, she moved to Seattle to invest in her artistic activity before discovering Africa the following year. A renowned artist with multiple distinctions since 1999, Pendergast has exhibited on three continents (America, Asia, Africa), in thirty exhibitions, with equal success and her works are in several important collections, including that of the Kenyan president, Uhuru Kenyatta.

Ghanaian artist Larry Otoo presents a new series of paintings in this exhibition that are proof of his ever-ascending curve. Holder of a Master's Degree in African Art and Comparative Literature from the prestigious "Kwame Nkrumah University of Science and Technology" in Kumasi, Ghana, Otoo has participated in exhibitions and residencies around the world and today is considered one of the most famous painters from his country. Otoo's works have been presented in Ghana, Spain, and in prestigious institutions in the United States, Denmark, The Netherlands, Ivory Coast, Italy, Canada and Germany, and some can be found in public collections as far away as Japan. 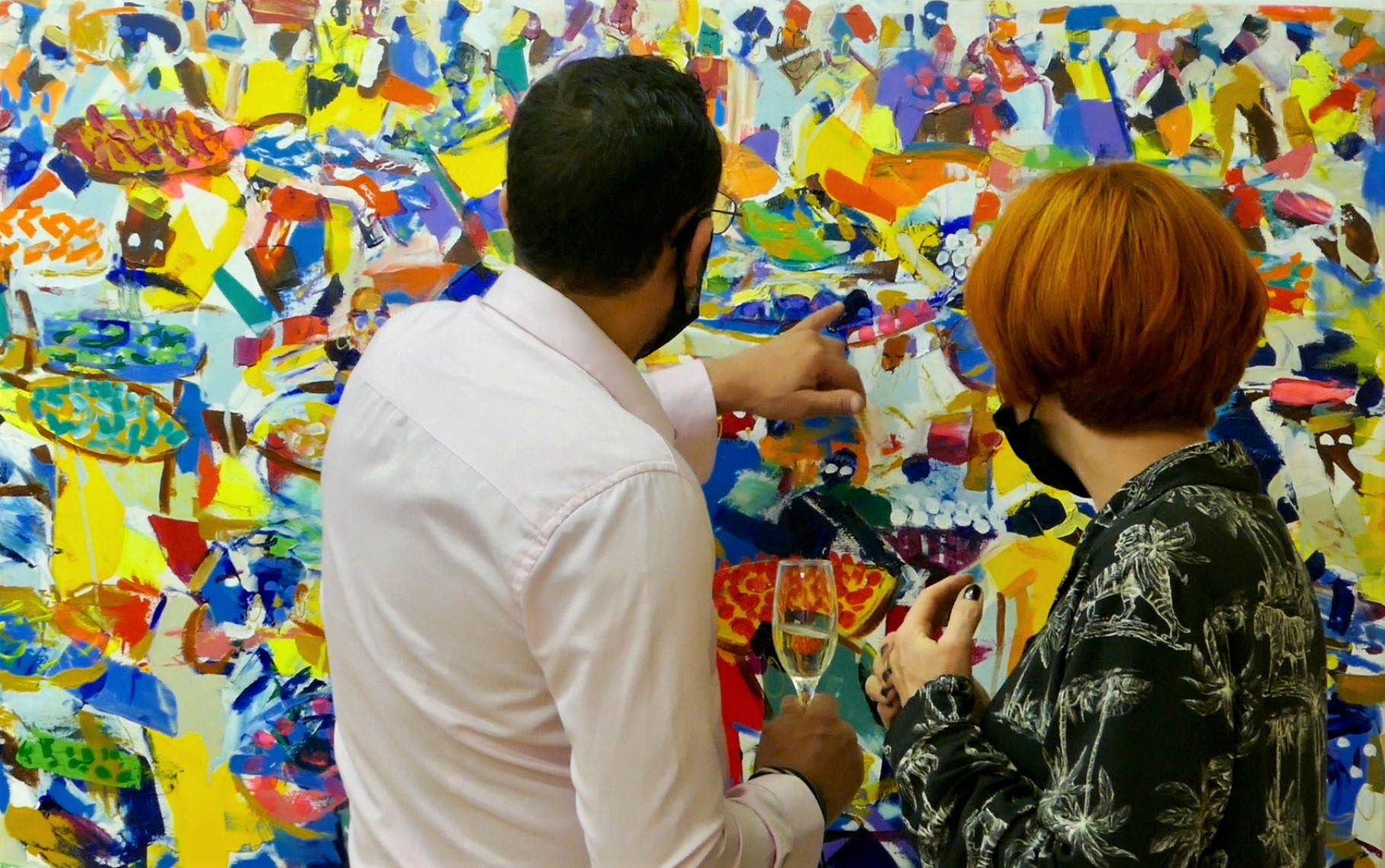 This does not disturb the life or the creativity of the artist, who traces his path with constants, revealing an infinity of variables. As Otoo himself explains, “All paintings have three things in common. First, they are dedicated to the human being; second, I only use tones derived from a limited number of primary colours that sometimes break down into secondary colours. This is my specialty as a painter. Third, they are all paintings of an unusual style.” From the market scenes he is famous for, to the most unusual portraits of women, Otoo’s work comes from an alchemy that only its author understands.

One of the characteristics of Larry Otoo is that he has chosen to only work with the three primary colors: red, yellow and blue, which he uses most often in their pure state, without nuances or mixtures. This gives an obvious visual power to Otoo's works that easily identifies him as the author. We could expect some form of fatigue, from the systematic impact of pure colour, but the artist's talent makes it possible to ensure that this is not the case and that he does not tire of discovering the different forms and combinations that his works take in a multitude of variants.

African markets are all alike, except no one is alike. If the abundance of the crowd, the smells, the colors of the clothes of the people who come there and the products that are offered there to the curiosity of the buyers are a constant, the dryness of the air, or the persistent rain, the luminosity, the passages from shadow to light, everything differentiates them and everything recreates them both similarly and differently. The objects used by both the merchants and buyers, depending on the circumstances, also create variables that have a strong identity. The power of the artist, using the old formula of the alchemists, is to find order; order from the primordial chaos. Loving to represent human encounters in traditional situations (markets, festivals, etc.) in his country, Otoo finds there his favourite material; the play of tin roofs, that of umbrellas and parasols that mark elegant territories, the contours of the narrow streets that make up the many graphic motifs that structure his paintings, especially since the often unusual point of view helps to give them an attractive new perspective.

Browse and buy from the show, Lost in the Crowd, here. 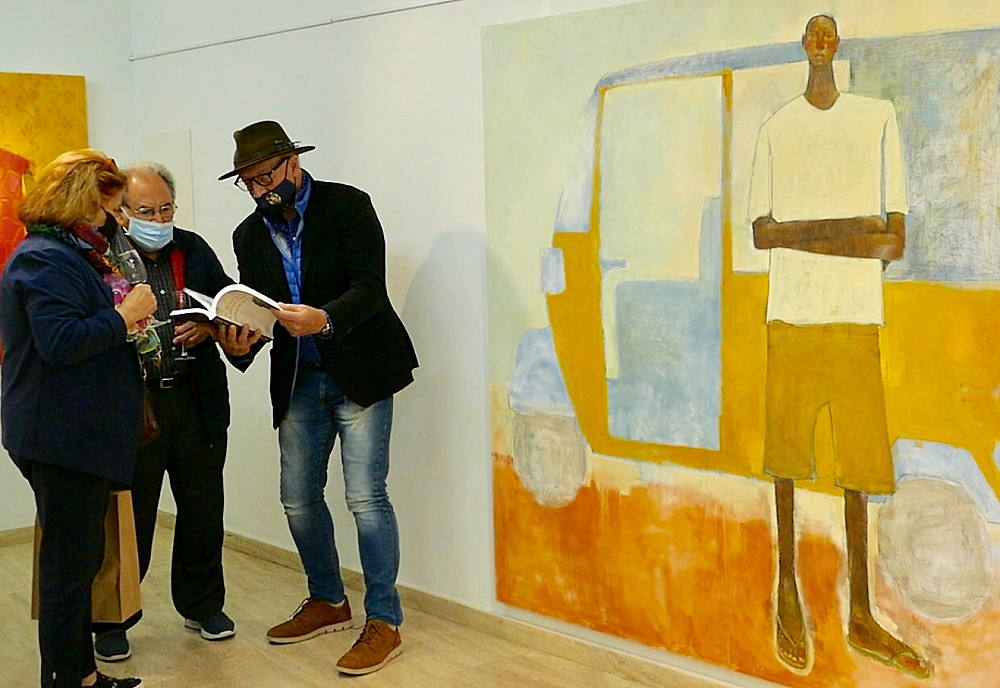