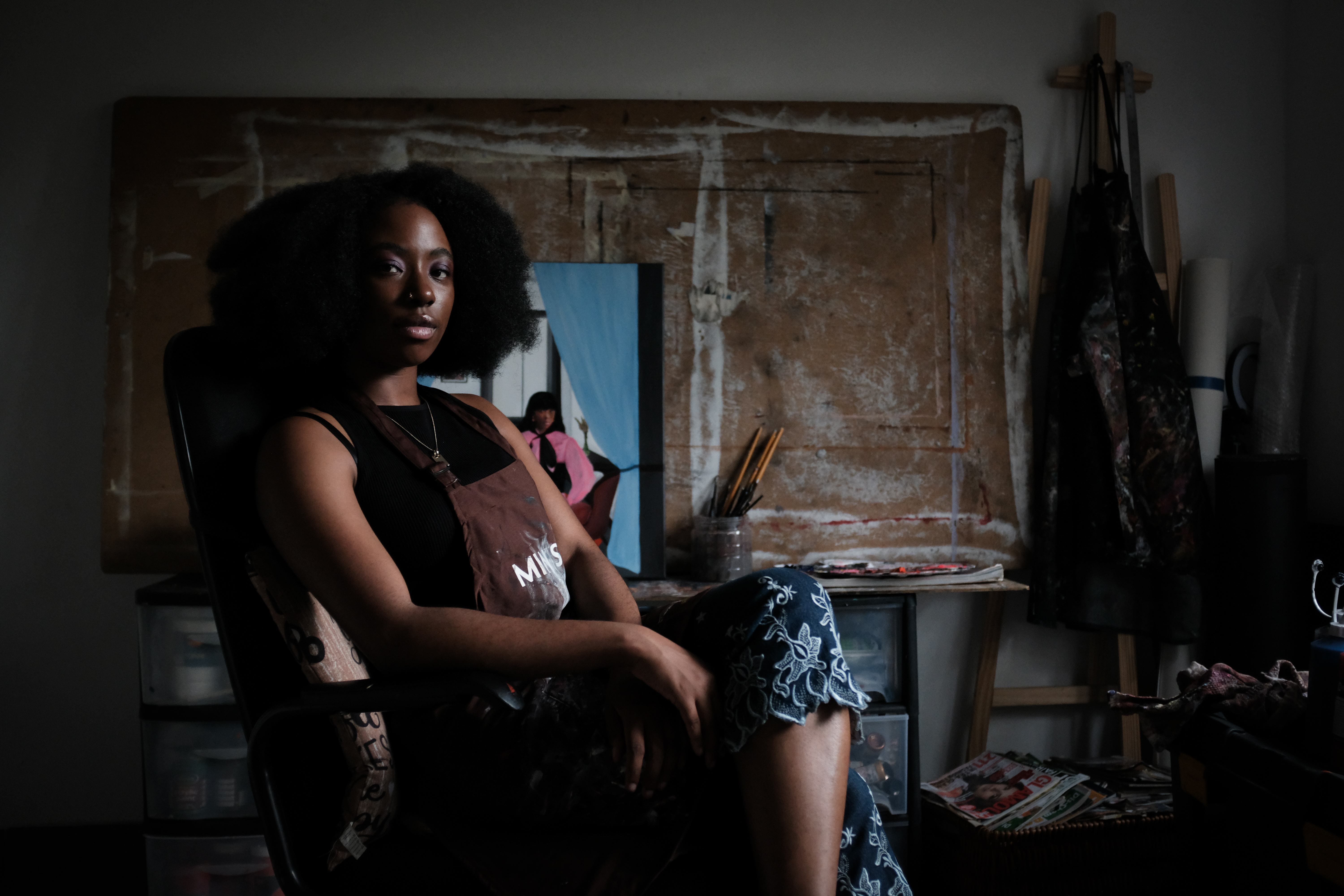 Cinthia Sifa Mulanga’s paintings of female subjects trapped in interior spaces chimed with the times. Now she will be overturning ideals of beauty through an artwork commissioned by Gucci, to celebrate the fashion house's iconic Diana tote bag.

Few artists made a name for themselves during Covid-19 and the lockdowns that forced everyone into isolation. Without live exhibitions, fairs and gatherings, it seemed as if there weren’t opportunities for unknown artists to elicit attention or generate a wave of interest.

Cinthia Sifa Mulanga bucked this trend, quickly gaining attention on Latitudes Online with a series of paintings that immediately suggested the artist possessed that elusive signature that artists and collectors seek out. Two years on, there are still waiting lists for her works, the prices of them have increased substantially, she has shown her paintings at local and international art fairs, is in discussion with a first-tier African gallery to exhibit works and has been commissioned by Gucci to create an artwork that celebrates the Diana tote bag. This is not bad going for a twenty-five-year-old artist who only launched onto the scene during the pandemic.

“It has definitely been surprising. I was really taken aback," says Mulanga, of the invitation to be featured in Gucci's latest campaign. "I'm only now digesting what has happened and starting to understand the impact of my work and how different it is.”

Mulanga was tasked with featuring the iconic Gucci Diana tote bag, in a new piece, commissioned by the Italian fashion house. First introduced in 1991, the bag was popularised by and later named after Diana, Princess of Wales. The collaborative process, which saw many versions sent back and forth between Johannesburg and Milan, resulted in the below artwork, Moment. 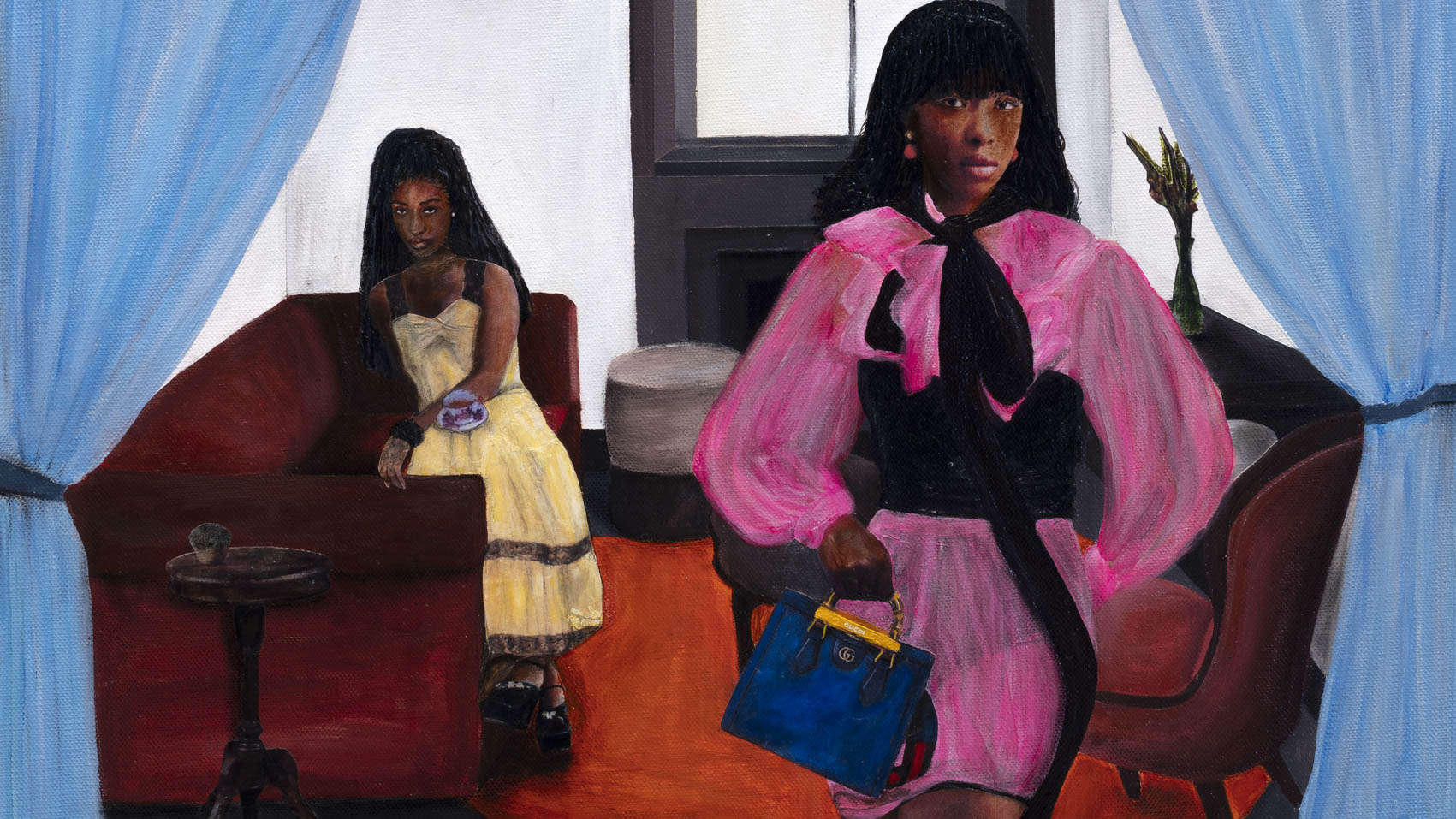 Moment, the artwork created as a collaboration between Cinthia Sifa Mulanga and Gucci to celebrate the iconic Gucci Diana tote bag

From the beginning, Mulanga’s paintings brought Teresa Firmino’s collage paintings or Sam Nthlengethwa’s interior scenes to mind – and indeed Mulanga confirms she was inspired by their work. However, in Mulanga’s interiors, which are peopled by black women and collaged images of representations of them, it was immediately clear she was driving a focused engagement with black female identity and ideals of beauty as depicted in popular culture and western art. You have this sense that her female subjects are in a waiting room, biding their time until they are granted entry into a painting or portrait. Representations of women surround them, testing their self-confidence.

The use of perspective and the visual planes and windows Mulanga introduces through the use of other images, collaged or painted, which decorate the interior spaces that form the backdrop in her works, brings to mind early Renaissance painting and portraiture – think of the famous Arnolfini Portrait by Jan Van Eyck. 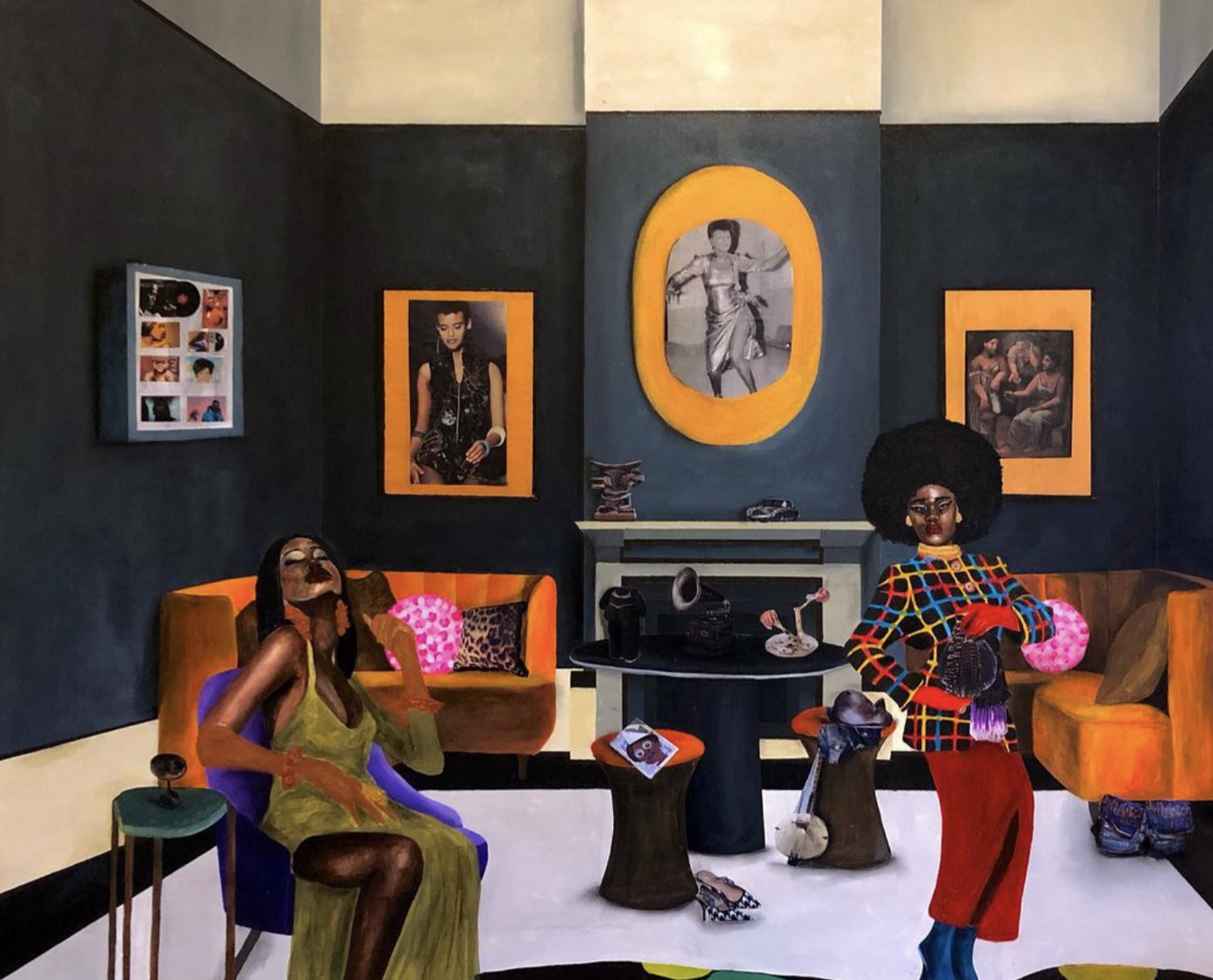 Mulanga confirms that she was influenced by art from the Renaissance era which was introduced to her while studying printmaking at the Artist Proof Studio, a Johannesburg printmaking institution. Her close study of paintings from this era not only turned her onto the use of perspective and interior décor in situating subjects in a milieu, but also ignited an interest in how female subjects have been portrayed in western art – and, of course, the absence of black women in this canon and the ramifications of this for black subjectivity and the ideals of beauty.

It was her older brother that turned her onto art and after joining an art programme she embarked on a part-time course in printmaking at the Artist Proof Studio. She had been dabbling with collage, but it was at this Johannesburg institution that she says she developed an awareness of composition and the placing of the collaged elements.

It is not quite that her interest and exposure to Renaissance era painting propelled her to ‘rewrite’ this history and insert black subjects. She suggests that her ‘model’ for her paintings evolved organically, unconsciously and emerged from a deep and personal awareness of how a western-white-centric view of beauty had impacted her.

“The (traditional) Barbie doll was my primary (point of) reference. Growing up there were few references of black women, so we had no role models to look up to that allowed us to feel beautiful. I wasn’t able to see someone in popular culture that looked like me. It made me aware that more black women needed to be represented. I was interested in how they try to be beautiful or what measures are used to determine this, whether it is through their hair or the tone of their skin.” 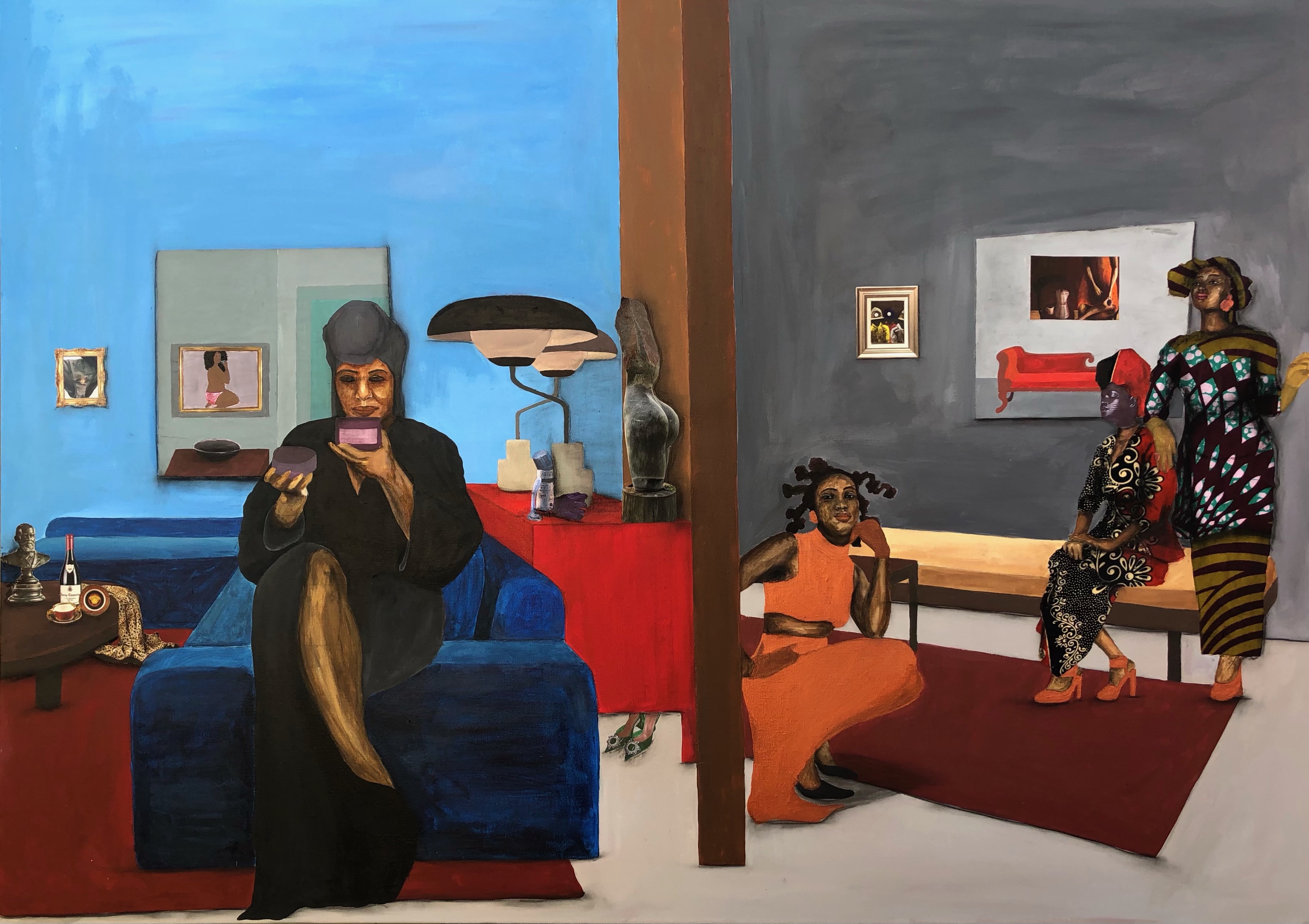 Mulanga is interested in exploring the different layers informing constructs of beauty.

“It is used to defend the fantasies of men, but it is also determined by women – they often look down on each other.”

Yet she doesn’t characterise herself as a feminist artist per se. “I still have to wrap my mind around what my version of feminism looks like,” she says.

Her art chimed with the times. During the lockdown, the murder of George Floyd propelled an awareness of how racism had permeated all spheres and black women graced the covers of fashion magazines at an unprecedented rate. The domestic settings that are a signature of her art struck a chord too; during the pandemic, people were trapped in their homes and forced to negotiate how these intimate spaces were a reflection of themselves. Reports of an increase in domestic abuse against women, also fed into the art or her thinking about women in domestic spaces, says Mulanga. In this way, her art dug into some of the major socio-political shifts that took place during the pandemic, so it is perhaps no surprise that her work proved so popular.

As domestic interiors are normally associated with safety and comfort, she was interested to pursue and question whether this was the case for her female subjects and by proxy the viewer, too.  Mulanga implies that an inner dialogue flourishes in a domestic space, which isn’t just a reflection of the self – through one’s personal taste - but is a space for contemplation.

“What are the conversations that we have at  home that we wouldn't normally have in other spaces?” she asks

Indeed, in her paintings there appears to be no escape for the female subjects – few open doors or windows hint at an exterior world. This doesn’t only bring lockdowns to mind; these interior spaces can operate as a metaphor for the female psyche or perhaps internalised patriarchal discourse that limits their lives.

She suggests it is also where her subjects find comfort, and retreat from the world, though the collaged images that populate the walls, bearing images that relate to representations of women suggest that expectations bear down on her black female subjects.

Movement, displacement and seeking out ‘safe spaces’ are pertinent issues for the Lubumbashi-born artist, who arrived in South Africa when she was nine years old in 2006.

“It's been challenging to settle down and to adapt,” she says.

The war and political conflict in her native Democratic Republic of the Congo had forced her family to relocate. Finding a ‘safe space’ and a comfort zone in South Africa took time and the xenophobic attacks which took hold in the country in and from 2008 had an indelible impact on the young Mulanga. 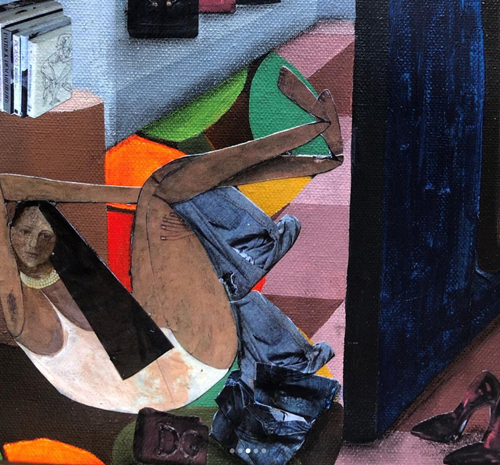 “There was a time when we didn’t want to speak in a taxi because we didn’t know the language and we didn’t want to get caught or harmed. The taxi driver would be asking questions and we just kept quiet out of fear that if we pronounced the words incorrectly he would know we are not South African. If we would speak in English he would ask why we are not speaking in Zulu. It was difficult.”

You are left with the impression that her mother held the family together through this period of transition in their adopted country. Her paintings appear to substantiate this, as Mulanga cites her mother’s multi-faceted identity as the inspiration behind the female subjects that manifest in so many guises.

“Women can do and be more than just one thing; they can keep changing to suit their own needs,” she observes.

For now, painting, being an artist is working for Mulanga, she has found her métier,  and now that the campaign she worked on for the Gucci Diana bag has been released, she is likely to rise to further prominence.  In a way, she couldn’t ask for a better canvas to project her discourse on beauty and black female iconography. 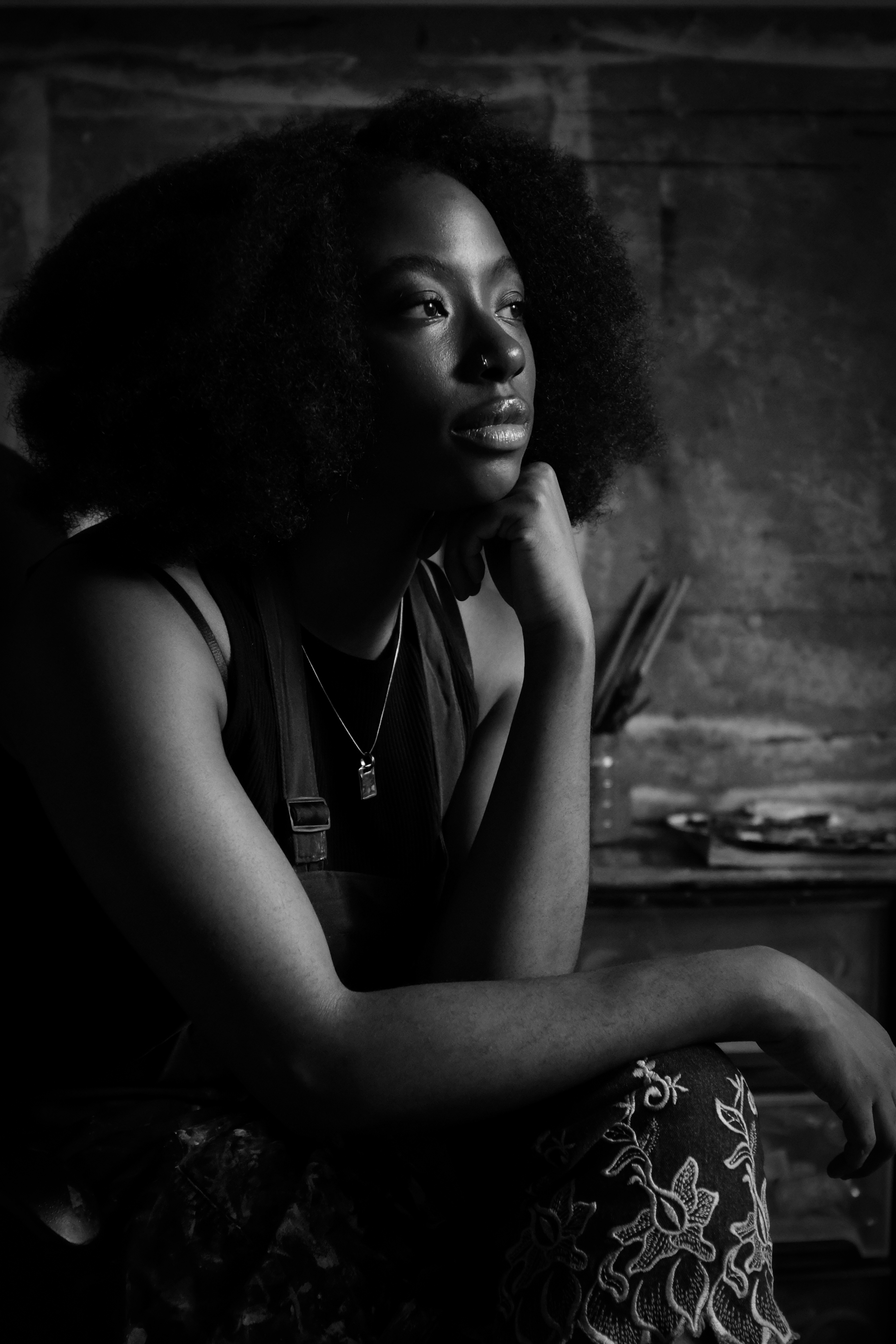