A feature by Misha Krynauw

Monochromatic minimalism steered by a focus on linework echoes the visual attraction the imaginative mind has toward literature. The way the text sits in wait of the reader’s adventure is not different to the invitation given to the audience by the artist when they present their notions and inspirations in their simplest forms. Encoded in both the lines and text are the messages given to the audience to discover for themselves the world imagined, within which they are free to immerse themselves. 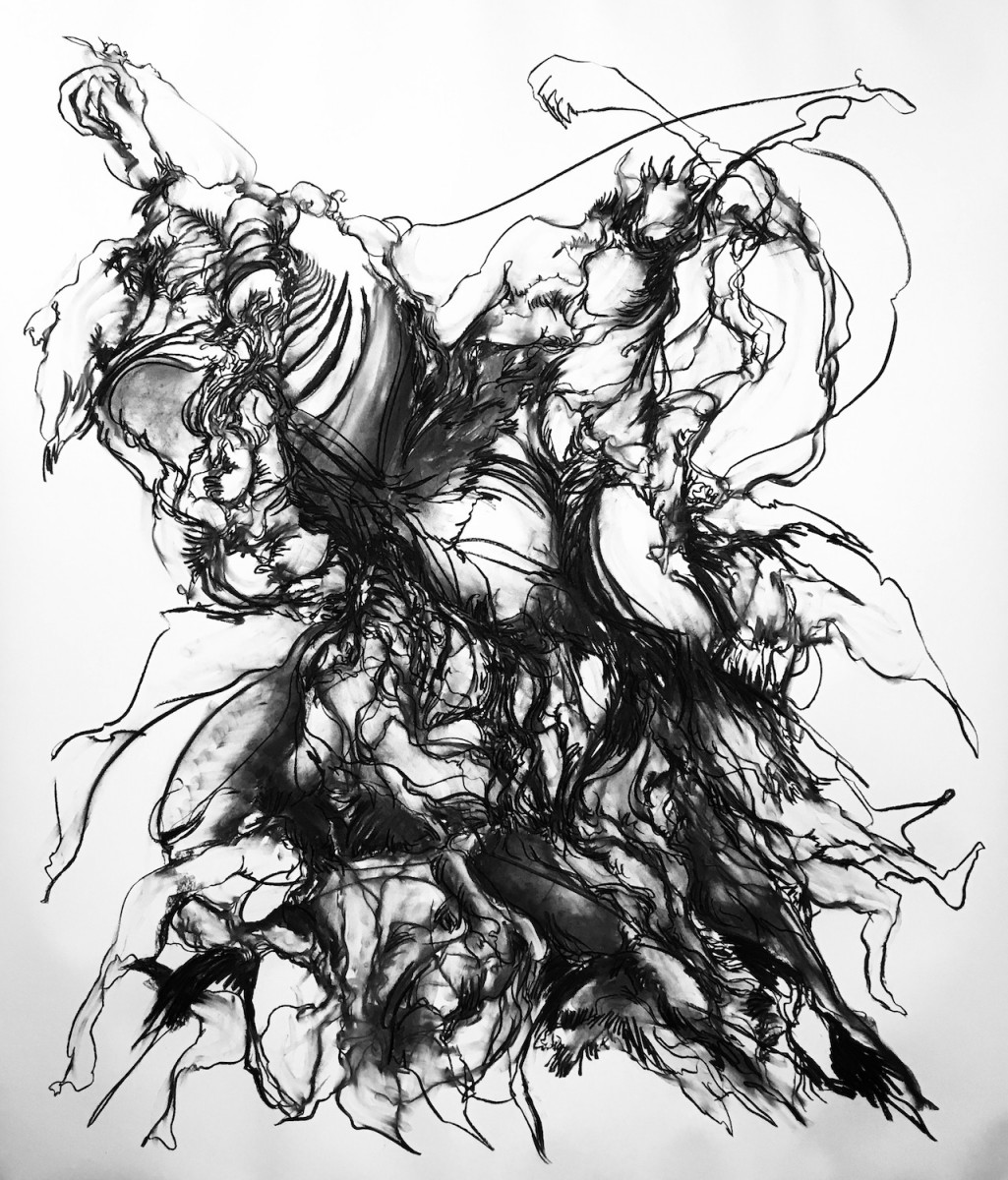 The spaces occupied by black and white in art, and the shapes created in their juxtaposition are where we insert ourselves, or are free to see ourselves reflected in the story as it unfolds. Like monochromatic art, a love of literature is a love of black and white; of ink, paint or coal and paper; segments of human history held right beside human fantasy. Each sentence is designed with secrets to coax the reader into the writer’s dimension. A love of literature is trusting the potential that lives at the mouth of a world of innumerable subject matter that lays in wait at the turn and twist of the proverbial pen, so the story may unfold.

This connection has created a channel through which concept can call to copy, or vice versa; or where the artist themselves can marry their love of both of these worlds, to the point of indiscernible familiarity within their process. Acknowledging the value in this intersection adds to the value of the creative world, a space which continues to expand with each piece of art and writing created. This intersection details the intimacy of recording, archiving, and remembering the power of the written word, while serving as a reminder of the intimacy of visual artistry as well, and the similar path taken from artist to art. 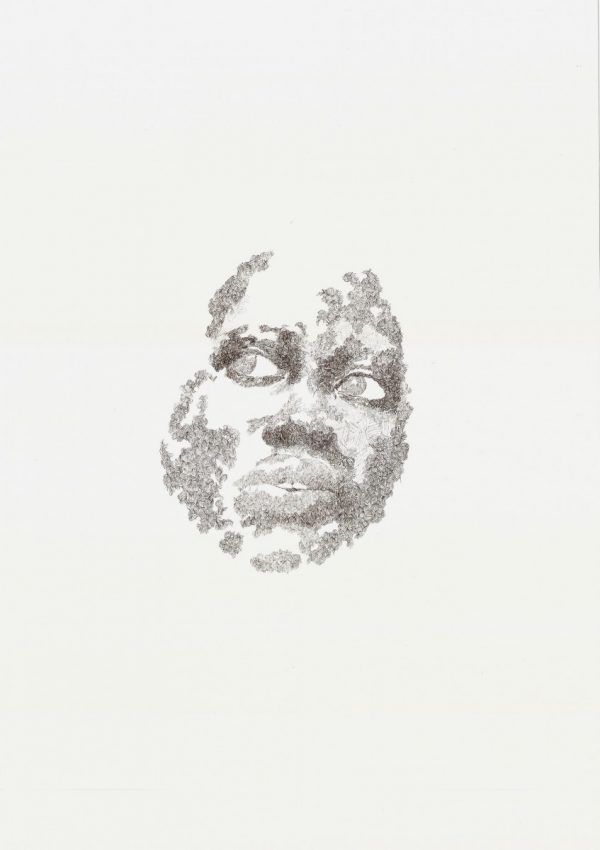 Zona Magadla’s series of portraiture Marks of Me arose from a desire to reconnect to her art. “I think the intention of the marks and them being so, is purely because I was seeking [a way] to get back to mark-making and creating; [an homage] to my womanhood at the time,” she explains. “There’s something about a new notebook that excites me,” Magadla continues, “A fresh book with unturned pages. I have the same feeling when an off-white, blank, crafted sheet of paper is in front of me. Then, I think only black ink can be it’s fitting compliment. A good pairing.”

The series itself is a collection of beautifully etched portraits that depict the symbiosis between light and space in the same breath as it honours the meeting of mediums and monochrome. Each etch feels like a reminder of the significance of every detail we possess, reflected back to us to acknowledge, and cherish. A reminder that every line is necessary, as well as every absence of colour and ink. The images present an idea that challenges ‘completeness’; Magadla leaves these spaces to ask questions, while giving room for answers in the same moment. Leaving room for speculation is another trait entwined with literature, and the parallel grows more obvious when speaking of the frame of mind entered into, to acquire this sacred stasis. “I think my instinctive reason to use black ink on paper is because it is the most familiar to my hand, and I enter a meditative state when I’m drawing.” 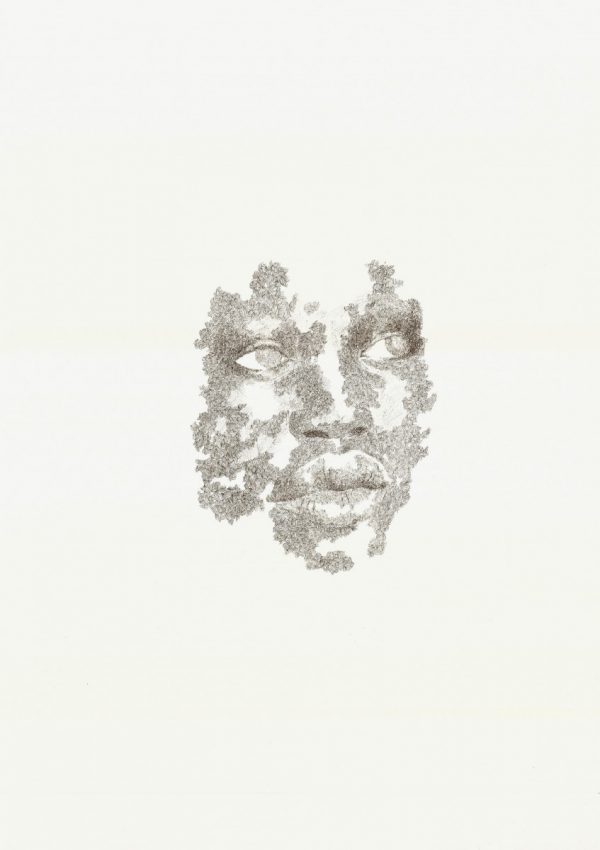 This state of acquiescence gives way to boundless imagination, and here, the artist must only decide what form the emerging ideas should take. The only limit is the impression that there should be any limitations at all. It seems poetic, then, that these simplistic, black and white pieces should emerge in their wake. Perhaps a reminder that reductive reasoning isn’t so much spiteful as it is accessible. Mapping out the journeys travelled by the innermost workings of the mind seem suited to classic linework as the artist gestures for us to follow them in. It echoes something innate and communicates without the words we will continue searching for, spurred on by their visual connotations  as our guide.

Artist and musician, Emma Richardson allows her creativity to volley between various expressions and mediums. Richardson, “[enjoys] playing with the readability of an image by resisting strict representations of the figure to explore relationships between the physical body and the mystery of the psychological self.”

“[I] draw from the figure, from life, from memory, from imagination,” she explains of her process, “[I’m] driven by an interest in psychology and sociology to examine relationships between the public and private self, the conscious and subconscious mind, and how [these elements] influence our basic human drives and behaviours.” 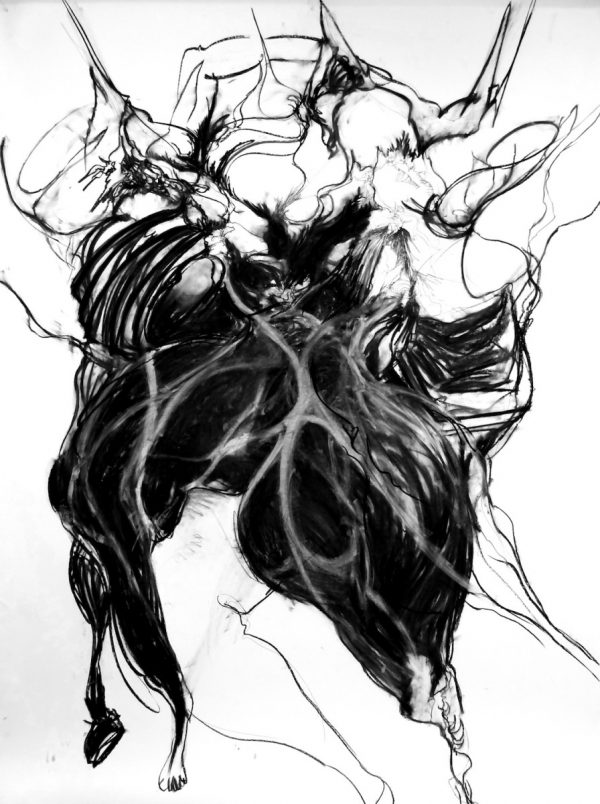 Her charcoal drawings are a collection of surging subject matter, charged with the physicality of her using her body to make quick, intense markings to “create [an] impact and tension within the compositions.” There is a force driving every shape and shadow as she busies the eye with her uninhibited iterations of form. A meeting of matter made with mayhem in mind. Richardson welcomes the freedom that follows Magadla’s meditative state as well, both artists beckoning the wordless intuition with the one hand, and the depths of the emerging concepts with the other.

Dale Lawrence’s series of Attempts in 2019; which he describes as ‘single, gestural drawings made impulsively’, wherein Lawrence would paint using Indian ink on paper, piling discarded tries atop one another until he deemed a result of the process a success. The ink of the previous try becomes the glue holding the rising stack of sheets together, evolving the role of the medium and materials used to create. Works emerged titled 37 Attempts, 63 Attempts, and 51 Attempts. Here, it is made clear that even in the pursuit of simplicity, and the use of minimalism and monochrome, there are hindrances that follow after the artist as they seek this succinct clarity one would hope would follow the human impulse as it runs the circles of itself. It is also evident that the value emerges with every attempt as it substantiates the pursuit with its ongoing evolution. Building the proverbial bridge as its direction is discerned. Lawrence’s repetition evokes patterned work that seeks to deviate from the ‘pattern’ and focus solely on his intent. 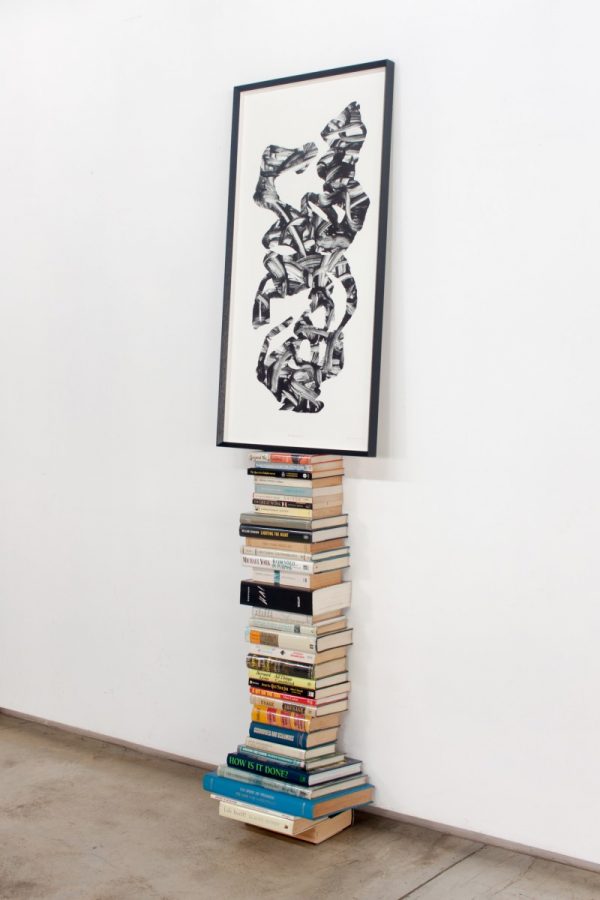 Lawrence’s collection Amateur Hour, 2018 includes works such as An Educated Guess; a work of monotype on paper, where the minimalism and monochrome are the focal point of the piece, framed and placed on top of a selection of found novels. Each book seems a foothold on the pathway to the pinnacle; with titles such as How is it Done?, Quit Your Job,  Ha!, and The Quest for Enlightenment. Again, Lawrence tracks his creations through the process of his creating; leaving evidence, logging a route here, and an idea there within the final product, to illustrate that though we make seek the singularity that simplicity lures us closer with, we should not discard the steps themselves, or the building blocks of our ideas either.

The collection also includes Serra’s List Revised parts one and two, as well as Your Urgent Attention Required, and Not Sure Yet, parts one and two. Serra’s List Revised; an alphabetised, ink on paper series, is brimming with heart-felt anecdotes such as: ‘to struggle against incomprehension’ and ‘to face oneself’. Here, Lawrence makes it evident where literature and linework stand with one another: hand-in-hand. These pieces are also evidence of the intimacy travelling between like-minded minds. These words wait like keys, to remind us of moments locked behind our own doors. Memories, mistakes or miracles. There are whole scenes sitting in our subconscious alerted by certain words and their certain sentiments, to elicit these certain feelings. And yet, even so, we remain uncertain. Though by now we are enthralled, thus, the cycle continues. 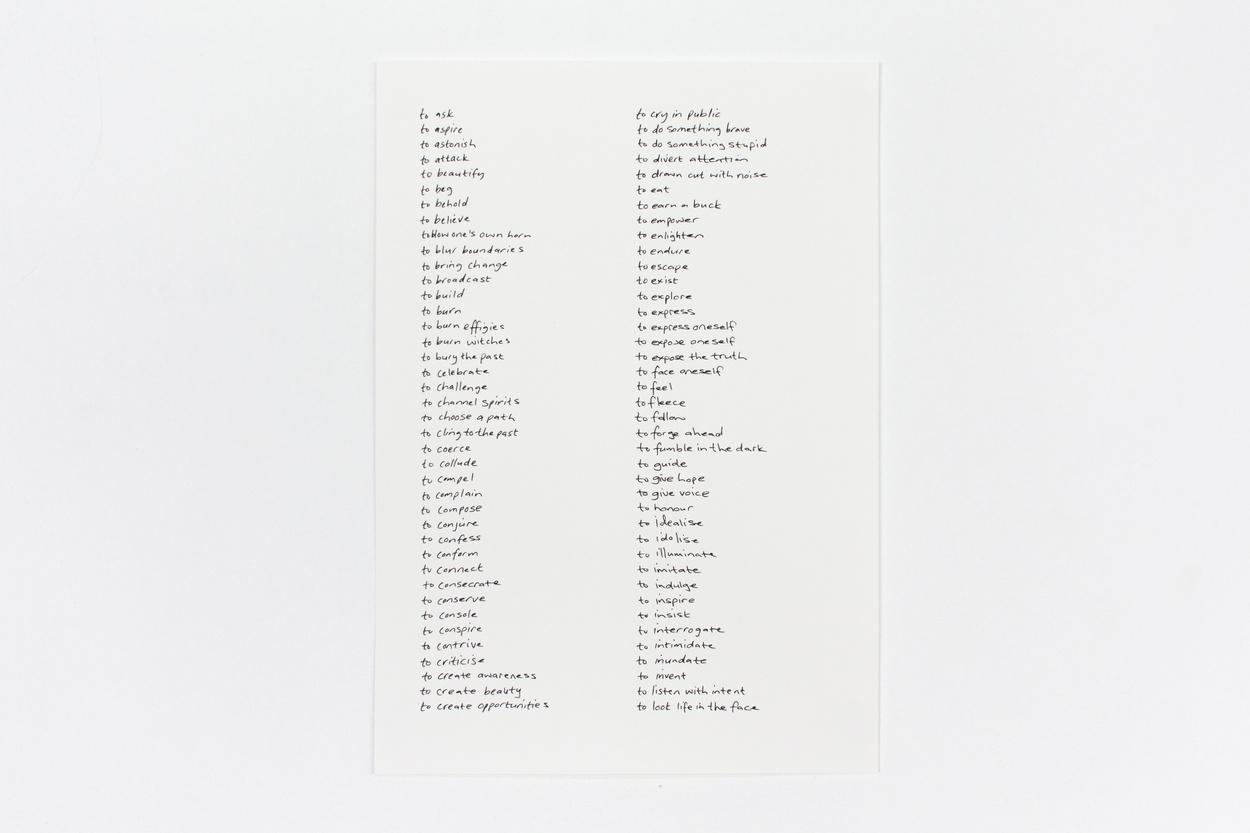 Horace’s infamous words, “ut pictura poesis”, or, “as is painting, so is poetry”, was a just foreshadowing to the mutual intricacies shared between the two art forms, and their inevitable connection and duty to the other. It’s the same flash of inspiration that animates the thinker, who then becomes the creator, regardless of the resulting artwork. The ease and familiarity with which audiences navigate literature and linework, or with which the artist gravitates toward minimalism and monochrome, are one and the same. There are several tethers, held fast by muscle and memory, which are used to guide us forward intellectually. The ebb and flow that occurs in the same space, preoccupies the thinker with purpose and most importantly, curiosity.

When choosing how an idea is to exist outside of the self, it is logical to create a template for it, something to solidify its presence beyond the artist. Whichever words cannot be found can live in the image the confoundment begets, and whichever forms cannot be fathomed, can be yearned after in retrospective text. Either way, the idea is given enough form to exist, and that in and of itself is the magic of art.