ESTHER MAHLANGU: ANOTHER MILESTONE FOR SOUTH AFRICAN PAINTER AT 85

As one of South Africa’s most acclaimed female painters, Esther Mahlangu could be grouped with Agnes Martin, the Canadian, the Iranian, Monir Shahroudy Farmanfarmaian, Carmen Herrera, the Beirut-born Saloua Raouda Choucair, the Austrian-born potter Lucie Rie and Etel Adnan. Not only has Mahlangu been working in a minimalist abstract mode in the manner of this esteemed group of female artists, but she too has been making art consistently throughout her life and has remained active as an artist in her advanced years.

This month the artist will turn 85 and to tie in with the occasion she will be launching the largest solo exhibition she has produced to date online and at the Melrose Gallery’s Johannesburg branch. 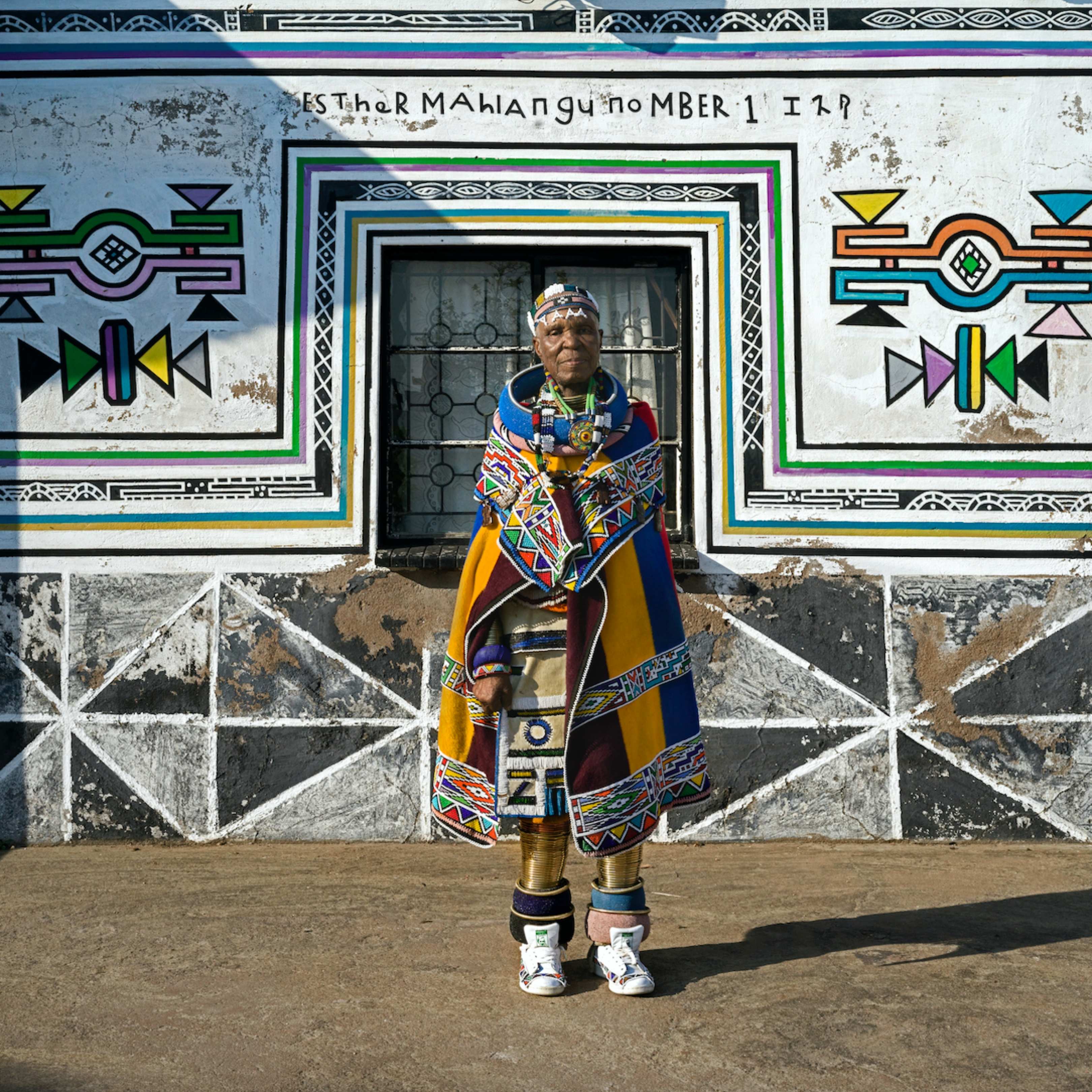 Dr Esther Mahlangu poses in front of an abode she has adorned with her distinctive interpretation of Ndebele visual traditions. Image by Clint Strydom

The landmark exhibition, curated by Ruzy Rusike, is fittingly titled Esther Mahlangu 85, and will showcase a body of artworks created over the last three years including the bold, geometric paintings for which she has received acclaim and an exciting new series of sculptures. 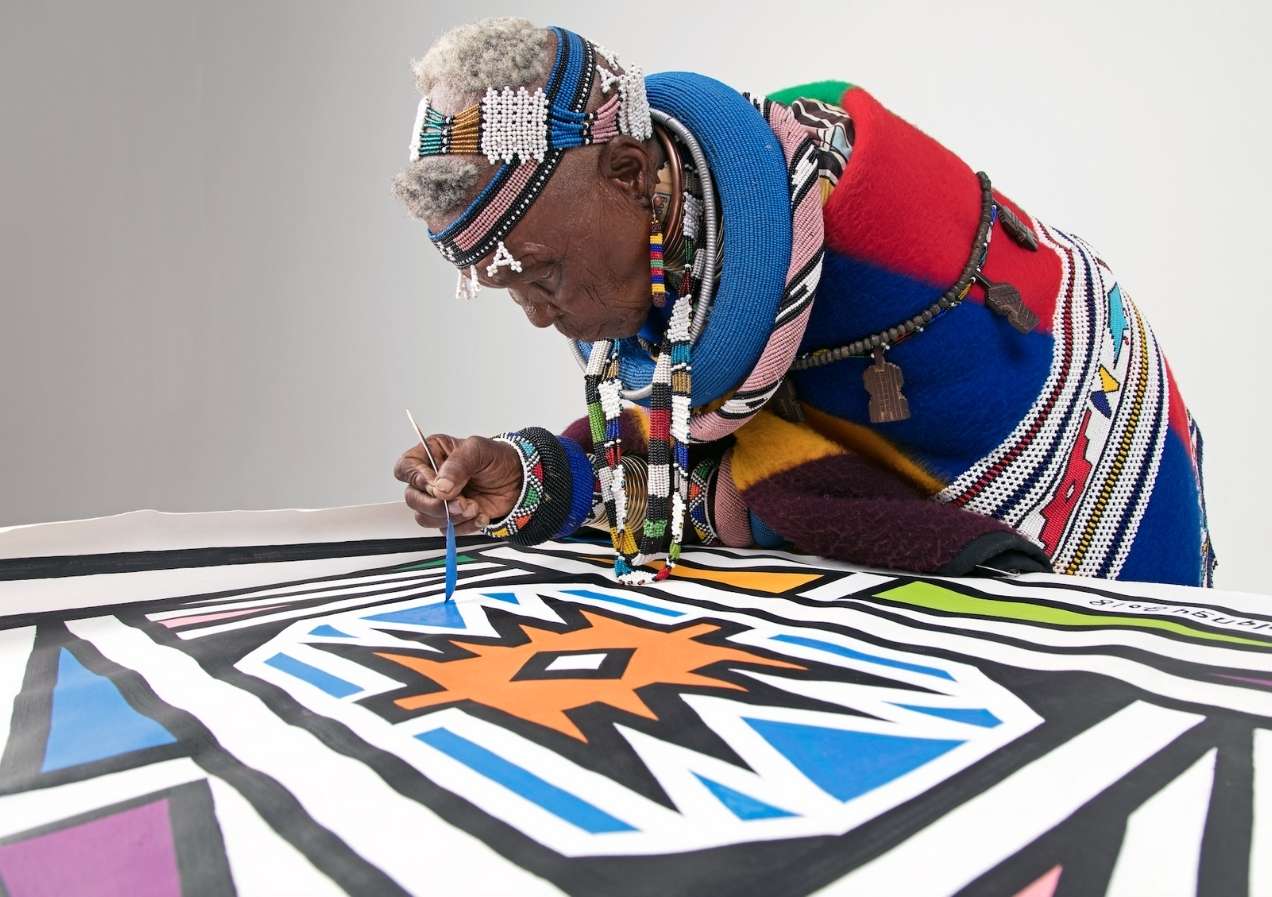 Dr Esther Mahlangu continues to paint with a feather brush as per the Ndebele visual traditions. Image by Clint Strydom

As with Farmanfarmaian, Mahlangu’s abstraction is inspired by a tradition of geometric painting from her native country. The bold angular forms and flat colours that have defined Mahlangu’s art are rooted in Ndebele visual traditions.

Following in the footsteps of her mother and grandmother, she learnt how to paint murals guided by Ndebele traditions from the age of 10. Keen to exploit new possibilities for her art, she transitioned from walls to canvases and then to covering all manner of found objects from war helmets, caravans and motorbikes to mannequins and planes with her characteristic black lines and angular shapes in vivid colours.  No two works are the same, though they are all strongly united by a minimalist vocabulary that belies the complexity involved in this pristine distillation of line and colour. How does she maintain such a high level of perfection in her brushstrokes?

“In our tradition if a young woman cannot paint a straight line the potential in laws would say that she is not good marriage material. It became something that was essential to master and once mastered it becomes automatic, the straight lines and balance of each painting is non-negotiable and an essential part of Ndebele painting,” says Mahlangu. 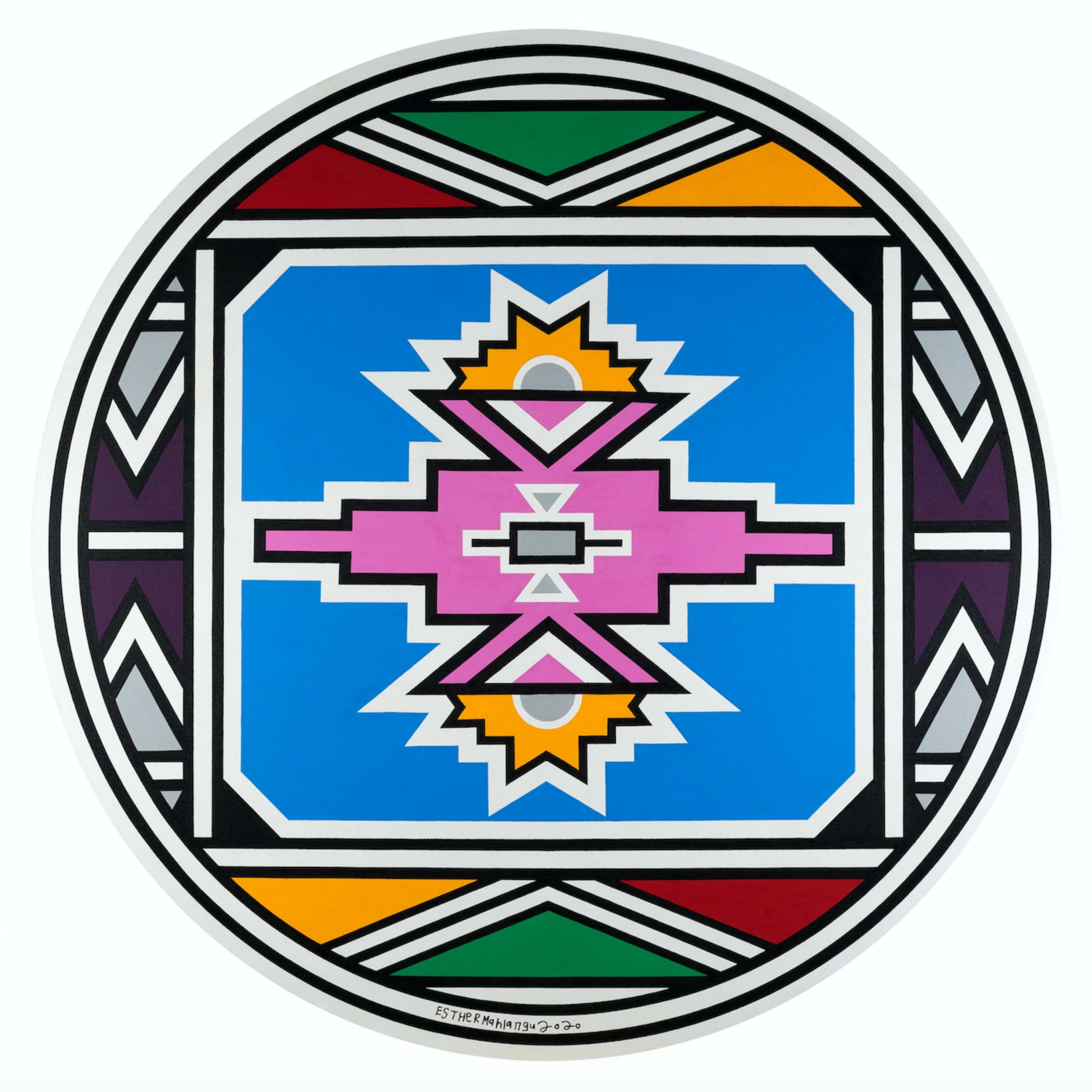 An untitled abstract work by Dr Esther Mahlangu produced in 2020

Aside from experimenting with the formal characteristics of her art, and continuously striving towards compositional balance, insinuating Ndebele cultural and visual traditions into high art circles and popular culture is what drives Mahlangu. “I want to pass on our tradition from generation to generation. So they can see where Ndebele comes from,” she says.

Her immaculate paintings and sculptures, pulsating with bright colours popping against black borders and patterns have been exhibited at the Museum of Arts and Design, New York, The British Museum, the Virginia Museum of Fine Arts, Philadelphia Museum of Art, the Guggenheim Museum, Bilbao, the National Museum of African Art at The Smithsonian Institution and, of course, famously at the Centre Georges Pompidou, Paris, when she made her debut in Europe in the late eighties.

Many experts are of the opinion that no African contemporary art collection can be considered complete without one of Dr Mahlangu’s artworks. As such her works are included in high-profile collections owned by Gervanne and Matthias Leridon, Jean Pigozzi, Isaac Shongwe, Larry Warsh, Swizz Beatz (Dean Collection), Sovereign Art Foundation and Michael Xufu Huang. Her distinctive art has struck a chord with many African-American celebrities - Oprah Winfrey, Alicia Keys, Will Smith and Usher have all acquired pieces by this unassuming South African artist.

After years of being overlooked or overshadowed by their male contemporaries, the likes of Farmanfarmaian, Choucair, Rie and Adnan and many other older, established female artists are now enjoying institutional recognition.  Mahlangu has won numerous awards. Last year she was bestowed with the Officier de L’Ordre Arts et Lettres (French Order of Arts and Letters) by the French Government. With a touring retrospective of Mahlangu’s vast oeuvre planned for 2023, wide recognition of her art is set to rise further. Yet, the artist is deeply committed to engaging audiences in her native South Africa.

“Whilst I have worked with many respected museums, curators, art fairs, galleries and global brands I have had very few solo exhibitions in South Africa. It is exciting for me to be launching one of my largest solos ever at the age of 85 in South Africa so that my own people can experience and enjoy these paintings,” says the artist. 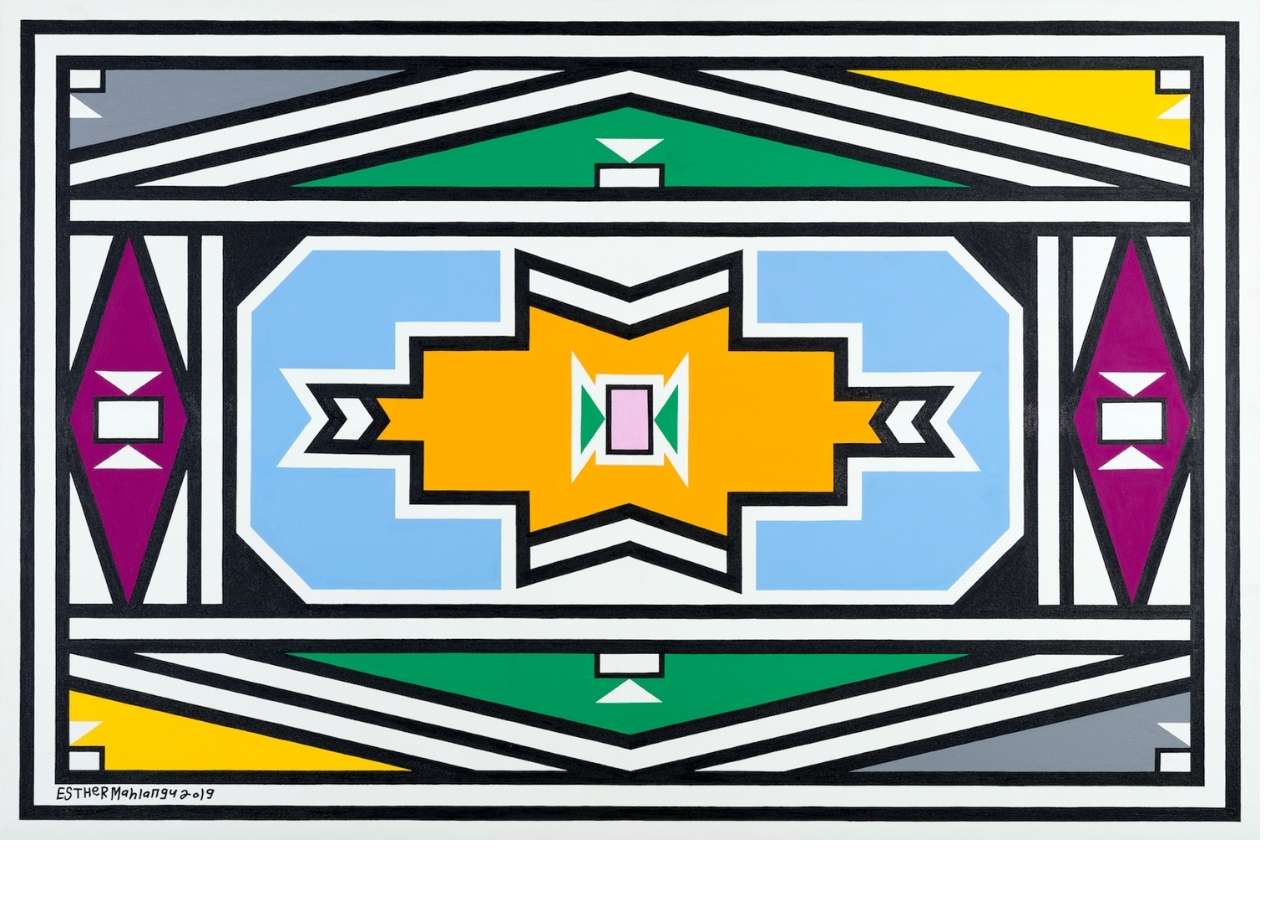 An untitled abstract work by Dr Esther Mahlangu produced in 2019

Mahlangu’s global standing, buzz surrounding this new solo exhibition, increased exposure at art fairs, and the upcoming retrospective, have been contributing to the growing value of her artworks. At both the dedicated African Contemporary and Modern sales this year in October, held by Bonhams in London and Piasa in Paris, the works by Mahlangu sold for more than the high estimates set for them.

The new sculptures she is producing for the exhibition are an exciting addition for collectors.  For the first time she will be painting onto sculptural forms that echo the lines and shapes that have dominated her practice.  Clearly, as with many of her female contemporaries, her age isn’t a barrier but an advantage.

Esther Mahlangu 85’ can be viewed online from November 11 at https://themelrosegallery.com/viewing-room/6-esther-mahlangu-85/

The exhibition will be open from November 20 at The Melrose Gallery, Melrose Arch, Johannesburg