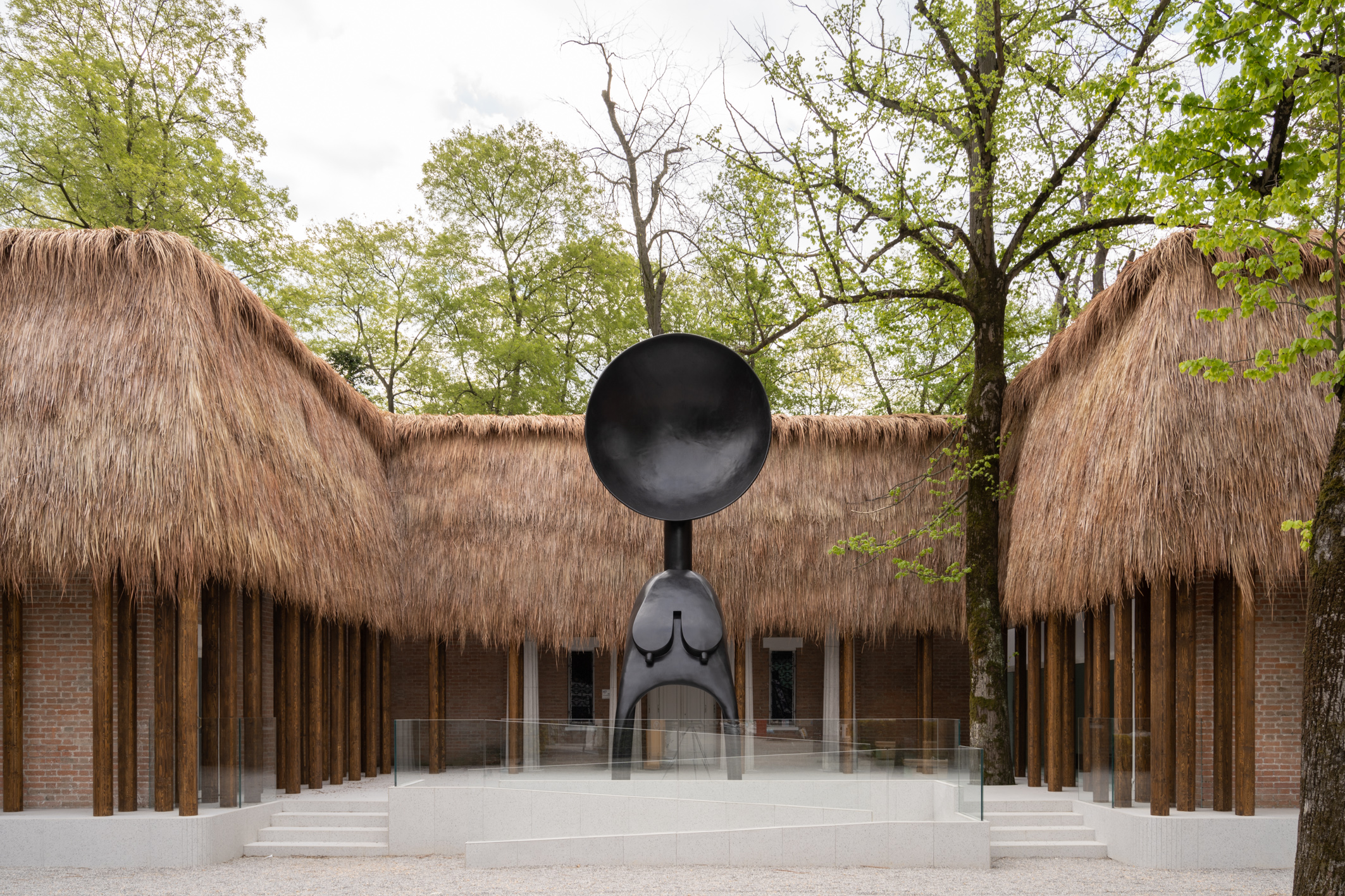 Black female artists triumphed at the 59th Venice Biennale. This should have bode well for Africa’s artists, and expression, yet none of Africa’s pavilions were dedicated to a female artist.

The 59th Venice Biennale will be remembered as the culmination of widespread institutional acknowledgement of female artists, and especially black female artists. Largely, this manifested through the main exhibition curated by Cecilia Alemani, titled The Milk of Dreams, which is inspired by the British female surrealist, Leonora Carrington. In this vein, overlooked female artists from the past or periphery are featured heavily - it has been observed that almost half of the 213 artists in the exhibition are no longer living. The female-centric vibe was reiterated through the Golden Lion Awards, announced over the weekend with; Great Britain winning best national participation with a solo presentation of works by Sonia Boyce, a special mention for France’s pavilion which was dedicated to the work of Zineb Sedira, a French Algerian, Simone Leigh named the best participant and special mentions for two other female artists, Lynn Hershman Leeson from the US and Shuvinai Ashoona from Nunavut. The Golden Lion Lifetime achievement awards went to two female artists Katherina Frisch, who represented Germany and Cecilia Vicuña the Chilean artist.

Reading the moment, which has been building globally, via major institutions dedicating their programming to shining the light on female artists, many of the curators of the national pavilions isolated a female artist, often of colour, from their country to represent it at the Venice Biennale. 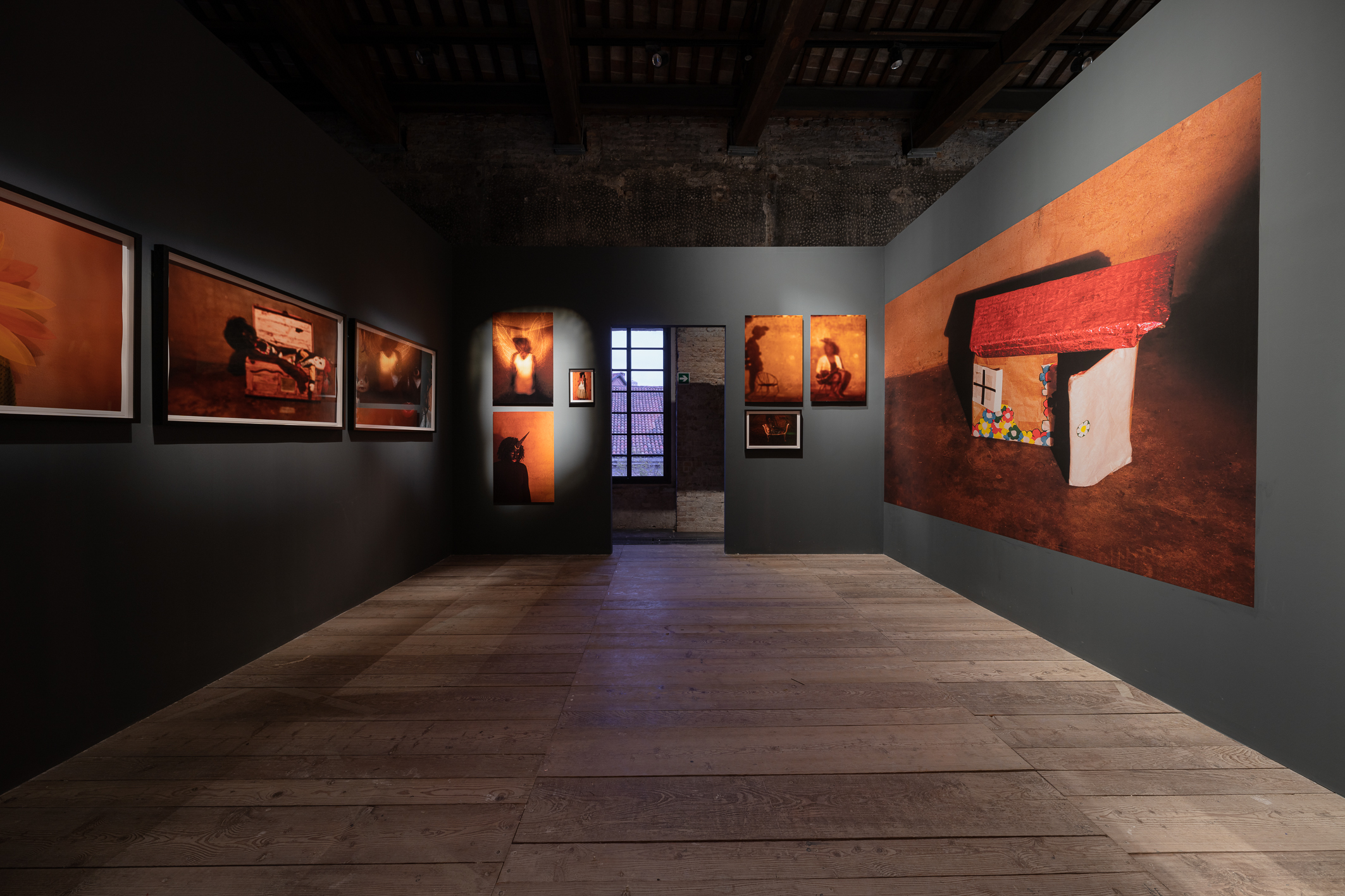 As such feminist thematics – typically tied to the body, which based on reports featured heavily – didn’t dominate the African pavilions. Perhaps African cultural expression remains under a patriarchal thumb? Or are African countries less compelled to appear to be towing a feminist line than European ones? Is the Venice Biennale just a space for nations to appear to be ‘correcting’ socio-political biases they can’t resolve?

Certainly, there is no shortage of talented African women artists on  - and off the continent. South Africa’s Marlene Dumas was the focus of a major exhibition at the Palazzo Grassi and by all reports, this show has been one of the strongest shows outside of the Biennale.

What accounts for this glaring absence and perhaps the lack of confidence in advancing one female artist to represent an African pavilion. You could argue that a solo presentation is more likely to have an impact as it tends to allow visitors to fully appreciate the artist’s practice but also gives the artist the space to conceptualise an all-encompassing presentation – a sustained dialogue if you will. 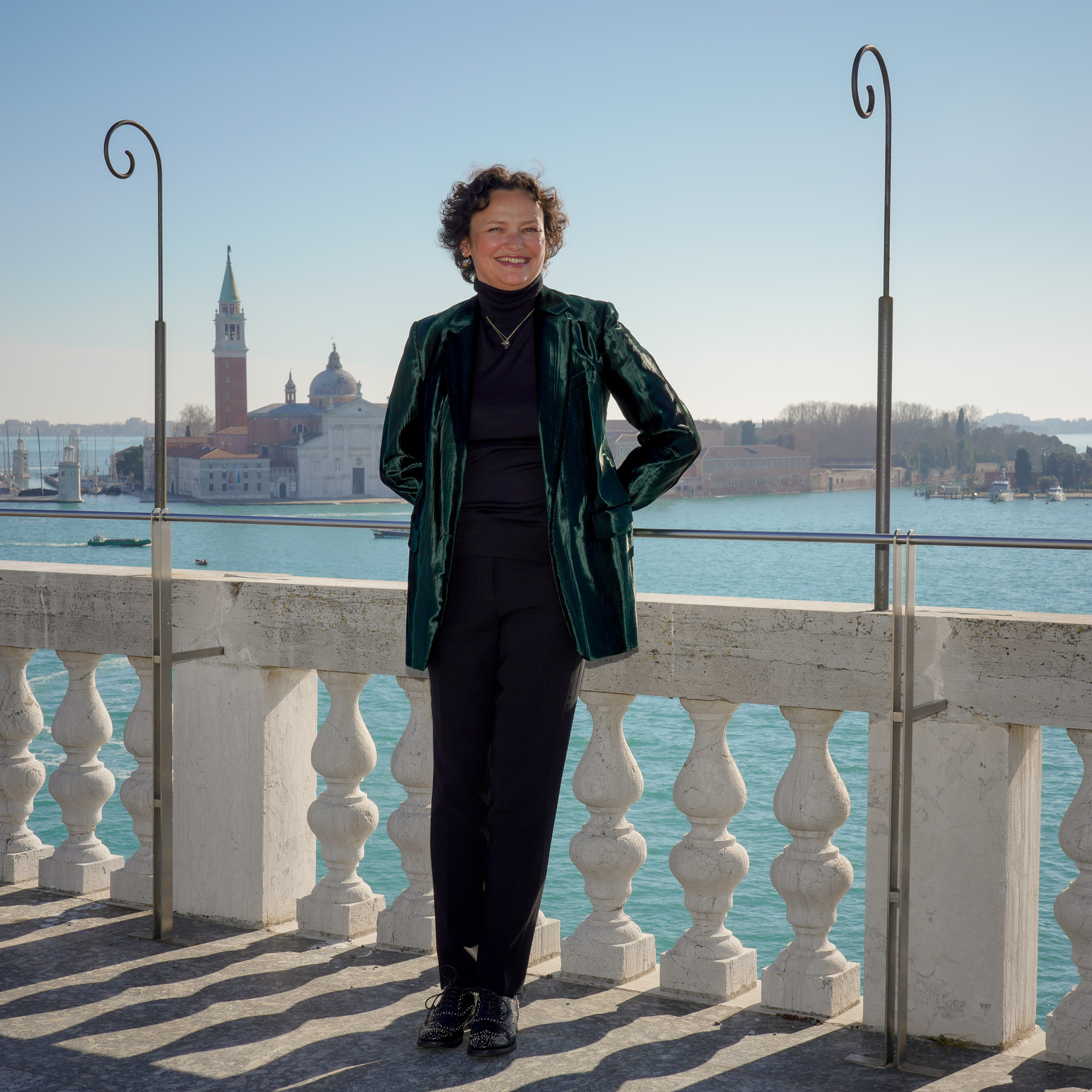 Despite this Uganda’s pavilion received a special mention in the award ceremony. It was curated by Shaheen Merali, and included the work of Acaye Kerunen (a female artist) and Collin Sekajugo.

Interestingly, an African aesthetic took centre stage at the 59th Venice Biennale via the heightened interest in Simone Leigh’s towering architectonic sculptures included in Alemani’s rambling exhibition and via the works she produced for the US pavilion. 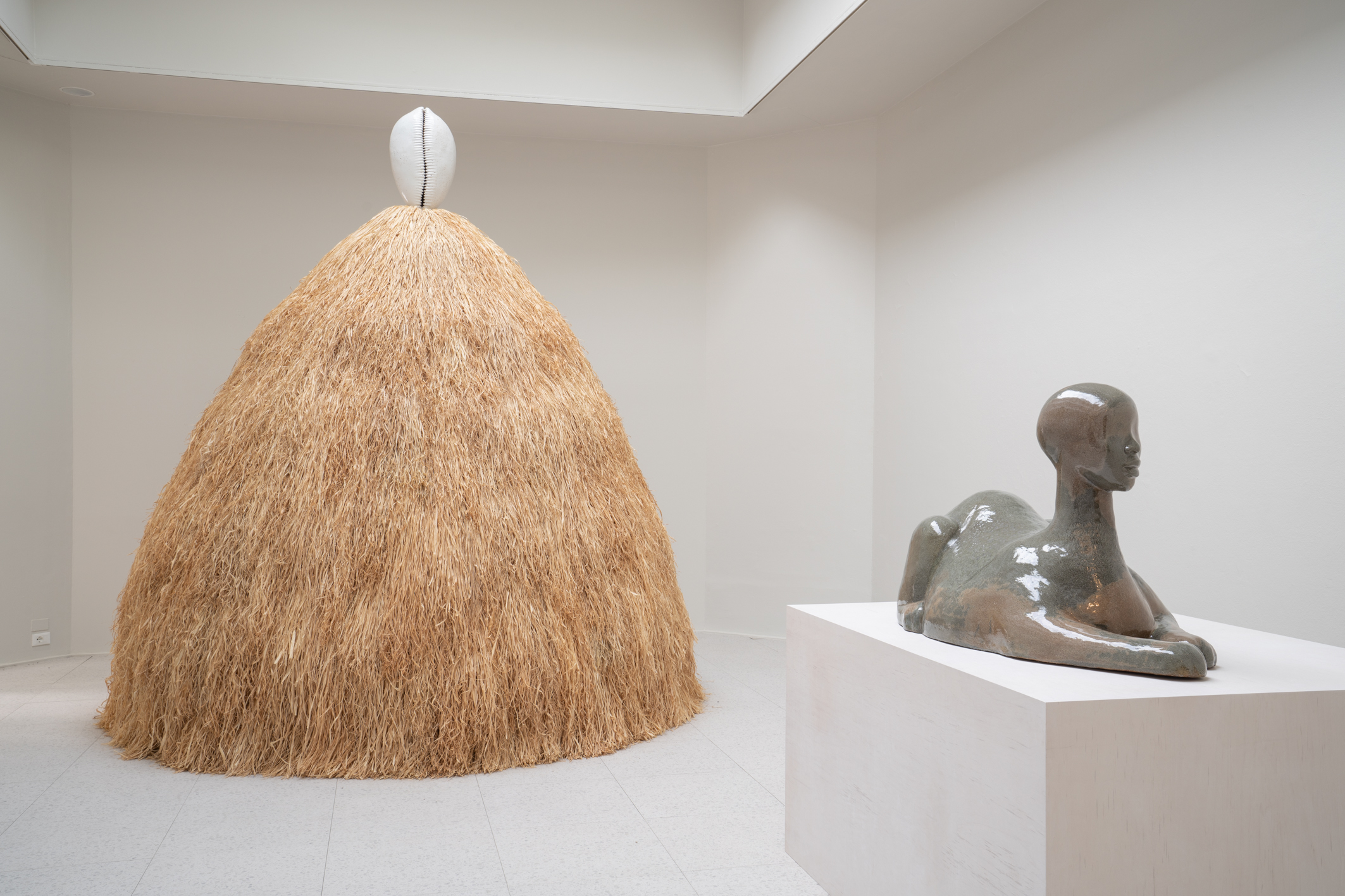 Leigh’s bronze Brick House, a 2019 sculpture, presenting a black woman whose torso is a fusion of a skirt and a clay house, dominated Instagram feeds the moment this monumental art event opened. To New Yorkers this figure might have been a familiar sight, as it was originally commissioned as an outdoor public sculpture for a busy artery, the High Line, where it would compete with towering buildings in that city. As such this 16-foot sculpture was designed to stand out in a busy urban landscape. The other works Leigh produced for the US pavilion appear (based on images) to be equally commanding playing off and in dialogue with the interior and exterior of the building.

Naturally, the monumental scale and slick execution of Leigh’s sculptures contributed towards the popularity of her work but they are also symbolic of a wider socio-political reordering in which black women are taking centre stage. 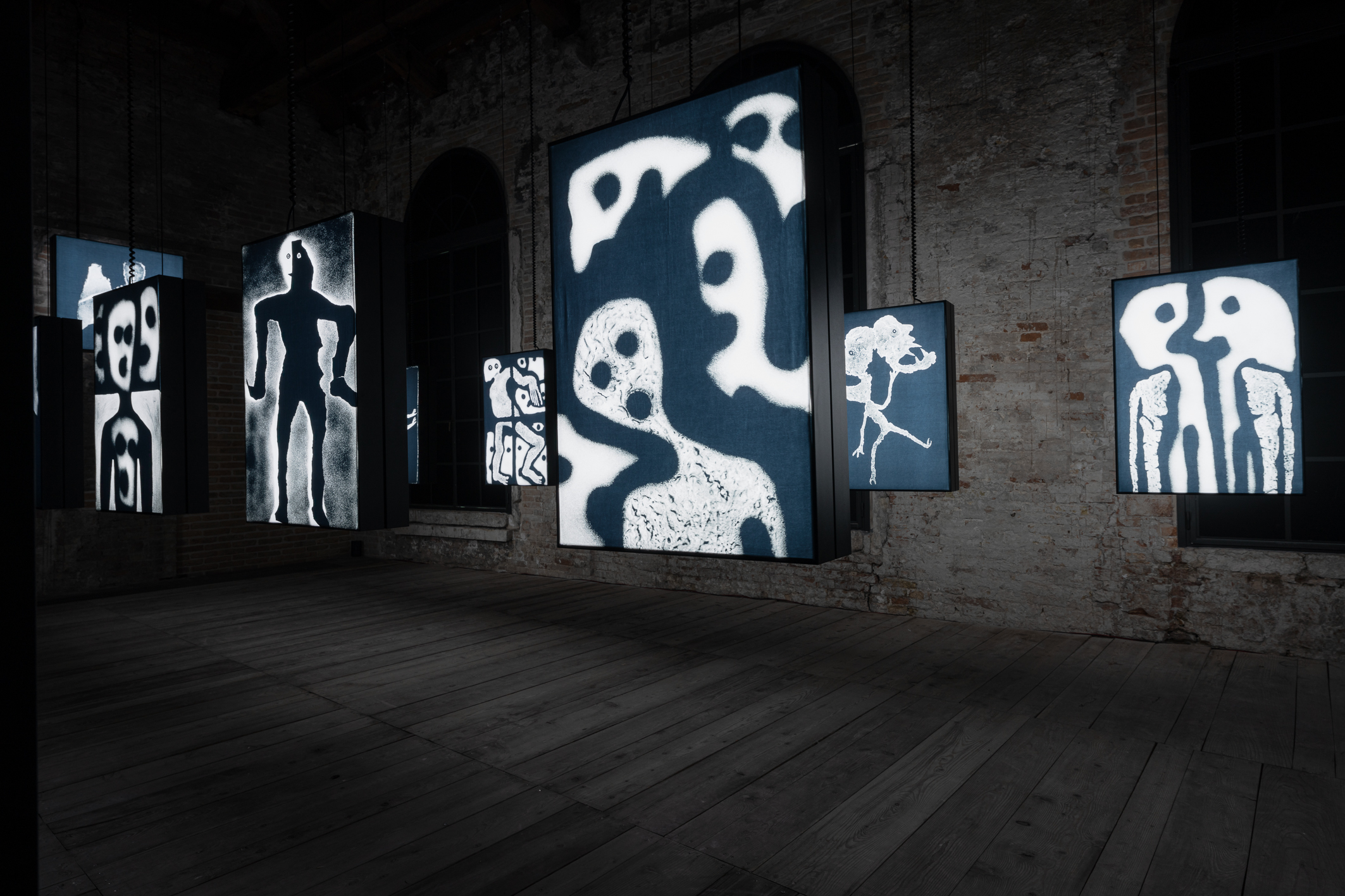 As such the celebration of Leigh’s practice at this important international art event should bode well for the African art world, particularly given that her aesthetic is said to be rooted in African classical art and architectural typologies. For example, the raffia-topped façade and wooden columns, layered over the palladium style Italian edifice, which Leigh has employed at the US pavilion, are intended to evoke the Cameroon-Togo Pavilion at the International Colonial Exhibition which took place in Paris in the early 30s. As such she adopts a concern popular among African contemporary artists; the objectification of African culture through the colonial gaze. In a recent interview with Leigh for The New York Times, she suggested that she found artistic and intellectual kinship in South African artists that included Dineo Seshee Bopape, Kemang Wa Lehulere and Nicholas Hlobo. 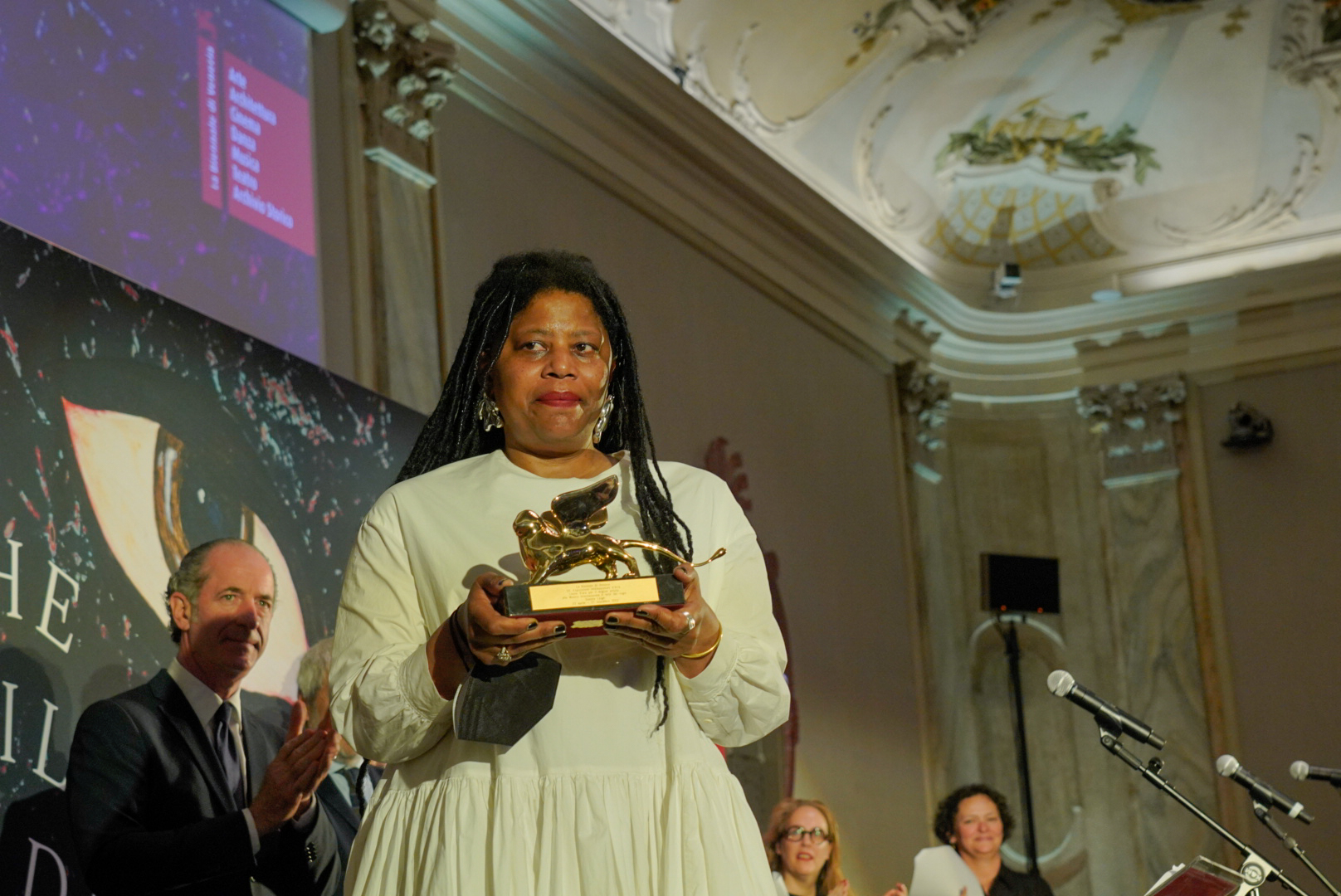 In this way, you could say that African art, history and aesthetics are at the centre of this year’s 59th Venice Biennale, but curiously it manifested vicariously via an American artist and pavilion. Are such themes and aesthetics more likely to be prized if they are channelled through an American than an African? It is a pity that no female African artists were championed at any of the national pavilions and given the room and perhaps the resources to fly above the radar. Might this have also been related to bureaucratic bungling? The team for South Africa’s pavilion was only announced in January this year, which would have left little time to create and ship ‘monumental’ works to Italy in time.

Some memorable works by African artists, fortunately, did make it to the 59th Venice Biennale in time. Large scale works by South African artists Igshaan Adams and Bronwyn Katz were included in Alemani’s exhibition, which also featured what appears to be an incredible installation work made of stones, dirt and sugarcane by Precious Okoyomon (from Nigeria) titled To See the Earth before the End of the World (2022). Sandra Mujinga, born in the DRC, also turned heads with her installation sculpture Sentinels of Change. 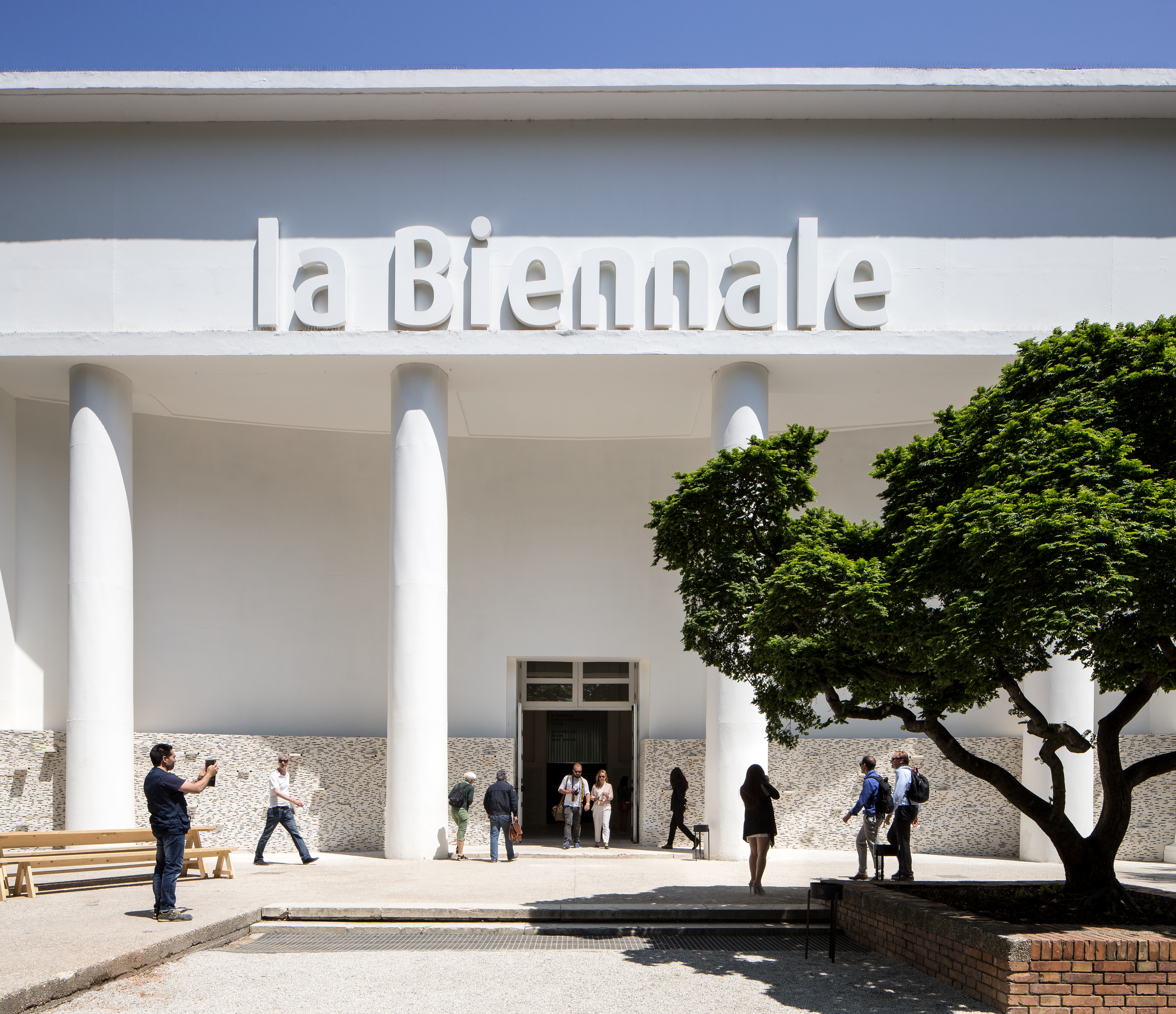