In Front of That Light

A saga is a long story of heroic achievement, especially a medieval prose narrative in the Old Norse or Old Icelandic traditions. Twilight, Star Wars, Tolstoy’s War and Peace and now Athi-Patra Ruga’s new exhibition ‘Interior/Exterior  ⁄  Dramatis Personae’,  subtitled ‘A Saga in Two Parts’ follows in this tradition of (s)heroism. In Ruga’s works, there is an entire universe of queer characters to meet and their stories play out in several mediums. 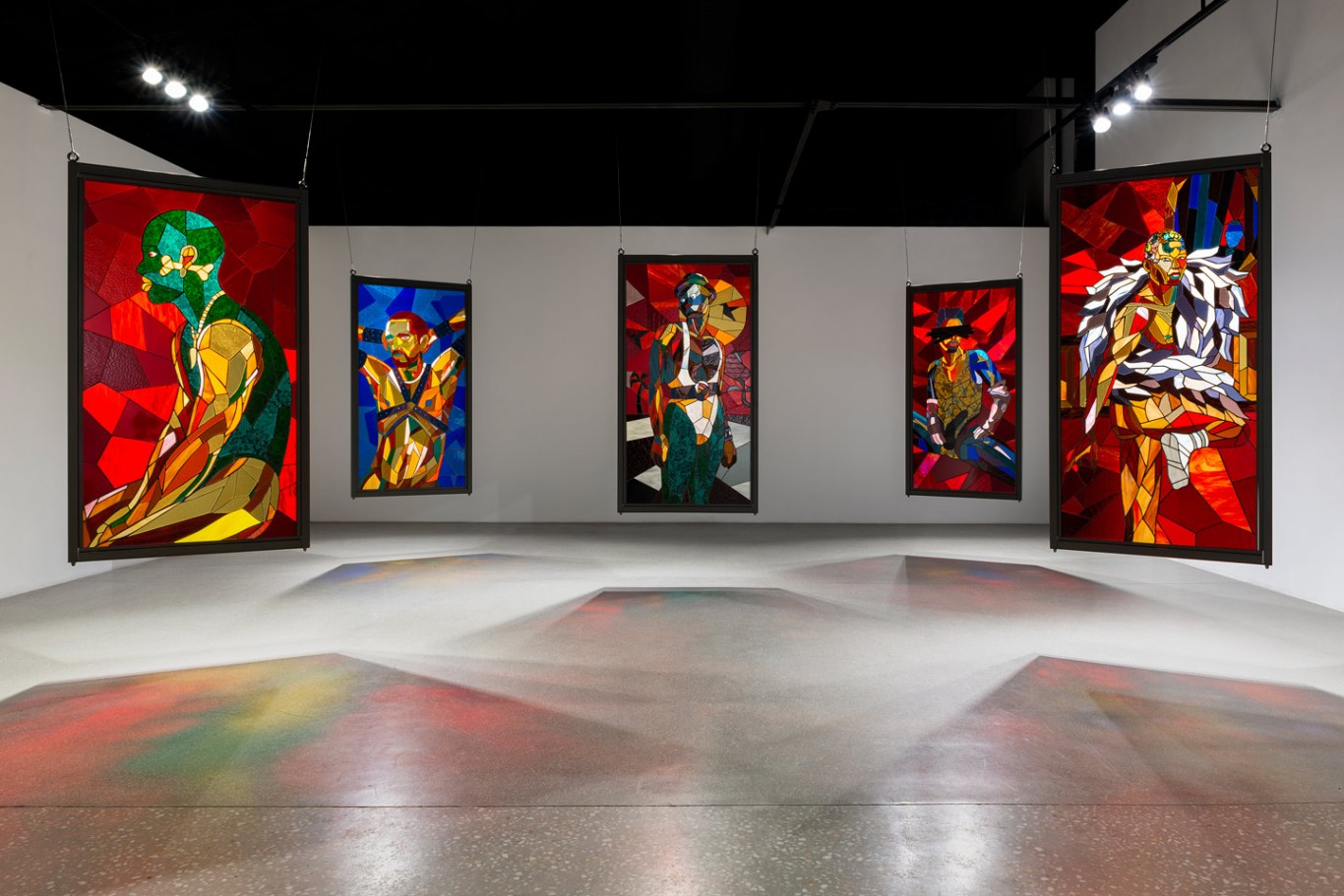 ‘Interior/Exterior’ is a body of work composed entirely of stained glass windows. It is a medieval art craft that requires enormous artistic skill to create workable designs as well as the engineering know-how to assemble and erect the piece. Ruga leans into the theological traditions of the medium which have long captured congregations with their beauty and the phenomenon of natural light seeping through the kaleidoscope of colorful glass panes. People who identify with Orthodox and Catholic Christian traditions know stained-glass windows well and can identify the narratives such as the twelve stations of the cross or other episodes drawn from the Bible. 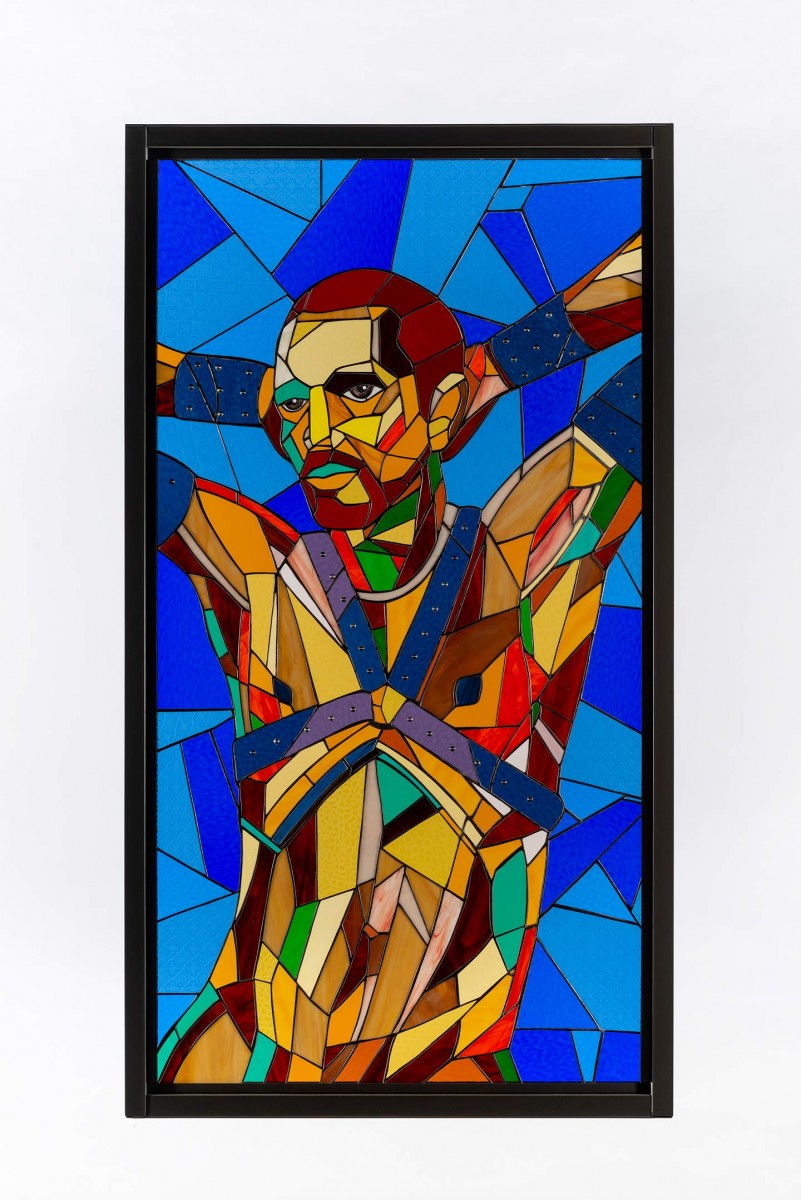 In Ruga’s works, the artist considers this tradition of Christian faith, strips it of all airs, and shows deities that are altogether different. The artist deliberately subverts biblical morality and religious teachings by centralising the black, queer, femmes and their unrecorded, ignored and forgotten experiences in this medium. Ruga creates a counter narrative for those who have been forgotten or marginalised from South Africa’s national imagination – his works bring people who have been left out in. Take The Speller The Killer, a work influenced by cruising culture, Broadway’s Cabaret, A Clockwork Orange, Liza Minnelli, and the camp culture borne from all of them.

Ruga describes Castrato as [the] Revolution, a work in the exhibition, as a self portrait of himself as the Castrato and a tribute to the tradition of the castrato, to the high art of drag and to theatre. It is unusual in its depiction of two organs in stained glass – the eyes and the phallus. The Castrato is shown holding his black phallus but the eyes, windows to the soul and all seeing, are blacked out. The Castrato is a character from Ruga’s universe of characters that has previously manifested itself some ten years ago in the form of tapestry. The reappearance of the Castrato in this new medium of stained glass is a deliberate act intended to baptise a new generation of audiences into his universe. His works simultaneously look backwards and forwards. He describes this as an act of institutionalising himself. Avatars are a tool that Ruga uses to enter conversations that he as the artist could not do in his civilian clothes and for self-preservation, costume and the persona come in. His characters Swazi Youth, the Castrato and others challenge social conventions of morality, and ask tough questions of the authorities that have established and maintained current convention. 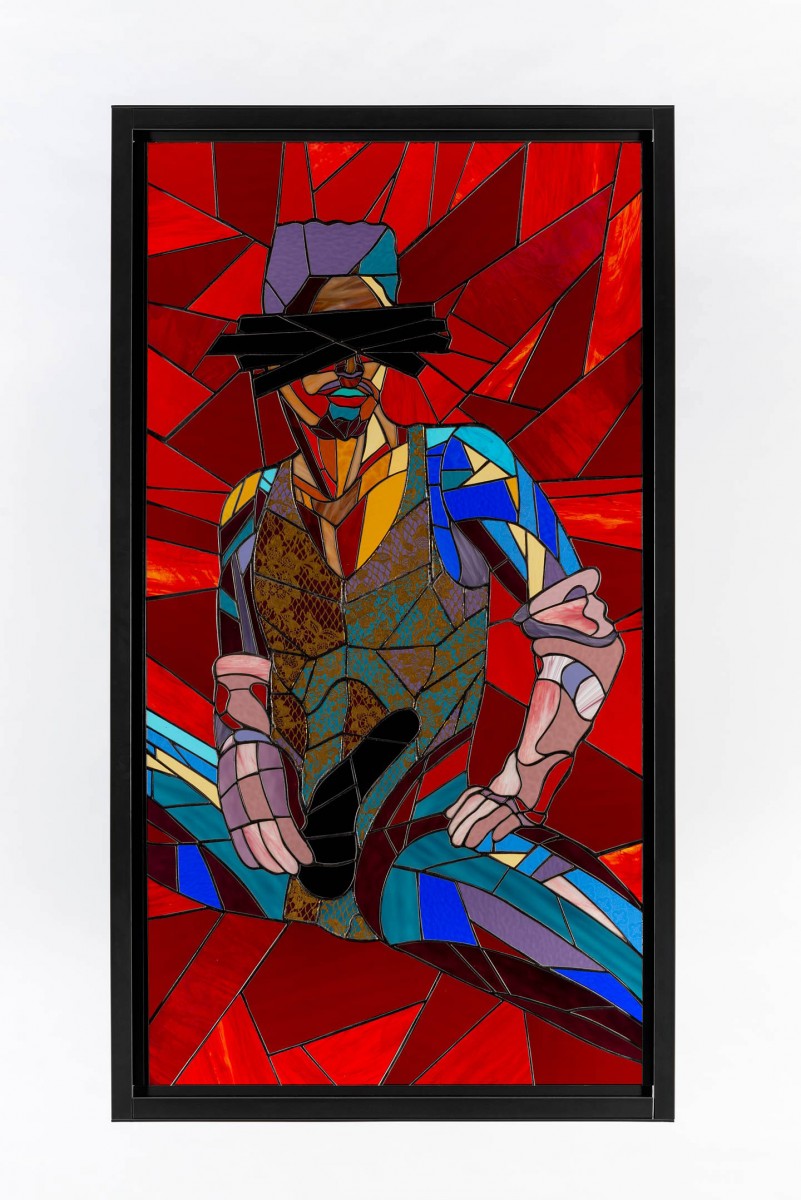 While it is not currently possible to commune in the multi-coloured light of ‘Interior/Exterior’ and experience Ruga’s idea of the absolute, the artist stresses that this is not a digital exhibition. These stained-glass works require the audience to be present to bathe in the light, colour, care and joy of the new Gods. ‘That absoluteness that comes from stained glass windows makes it a medium that goes beyond say paint  because it really does need the audience to come through. I’m fascinated with that especially in these times because I need people to be in front of that light,’ says Ruga. ‘I need to be in front of that light.’

Ruga is not bound by the medium and he makes a point of troubling genre. ‘It’s not about one thing,’ says the artist. ‘My influences flow in from theatre and the tradition of the castrato or the travesti.’ The saga, in two parts, meet through the artist’s intense focus and attention to detail when it comes to the characterisation of his world and the execution of the works. It meets through Ruga’s undeniable capability in portraiture and studio practice and his craftsmanship in the taming of glass and in the mastery of tapestry.

This part of the saga, ‘Dramatis Personae’, takes the form of wool-and-thread (petit point) tapestry. Ruga introduces the audience to a new cast of characters in his new and curious world ‘The Lunar Songbook Cycle’. It is a trans-media body of work, spanning screen, theatre, objects and opera, using motifs informed by astronomy and the isiXhosa calendar. 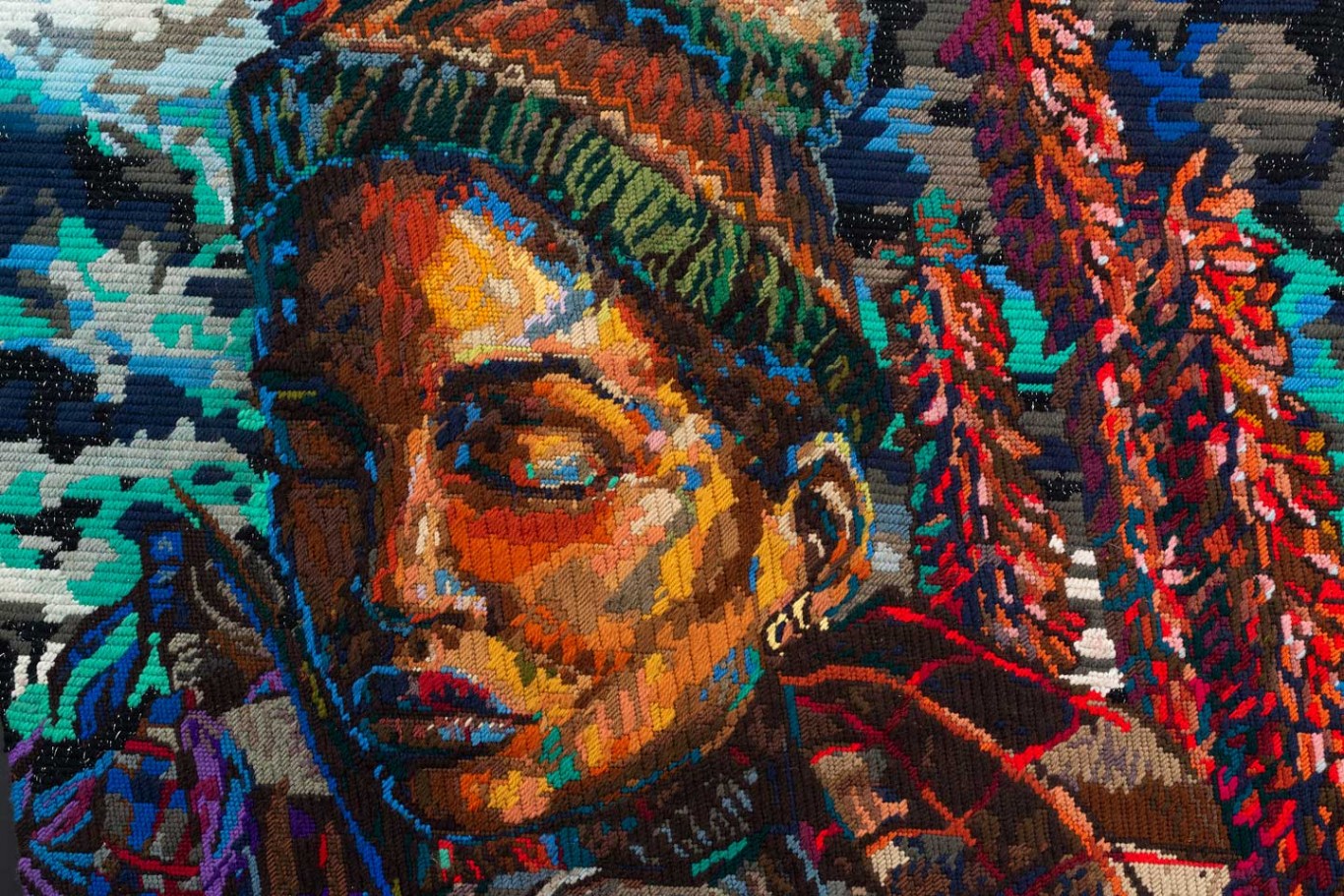 Nomalizo Khwezi is a notable character introduction to Ruga’s intricate world of storytelling. Ukutsiba uMgubasi, a portrait of Nomalizo Khwezi at the beginning of her journey, shows the woman sitting in the pew, dressed in her church uniform complete with a white hat and the purple blouse. In the background, a stained glass window depicts St. George slaying the serpent.  The tapestries are sequential and uNobantu noMajola is the next step of Nomalizo’s journey. The work depicts her removed from the church and occupying the role of the literary character Thembeka kaKhalipha from Archibald Campbell Jordan’s Ingqumbo yemiNyanya, a classic novel in isiXhosa which was published in 1940 by Lovedale Press.1 The serpent appears again in this tapestry making it a motif in ‘Dramatis Personae’. Here, she wears the snake around her shoulders signaling a change in her path from the background to taking an active role in the telling of her story. Nomalizo’s story mimics the classic arc of the hero’s journey and includes adversity, conflict, internal dilemmas and ultimately overcoming and triumphing. 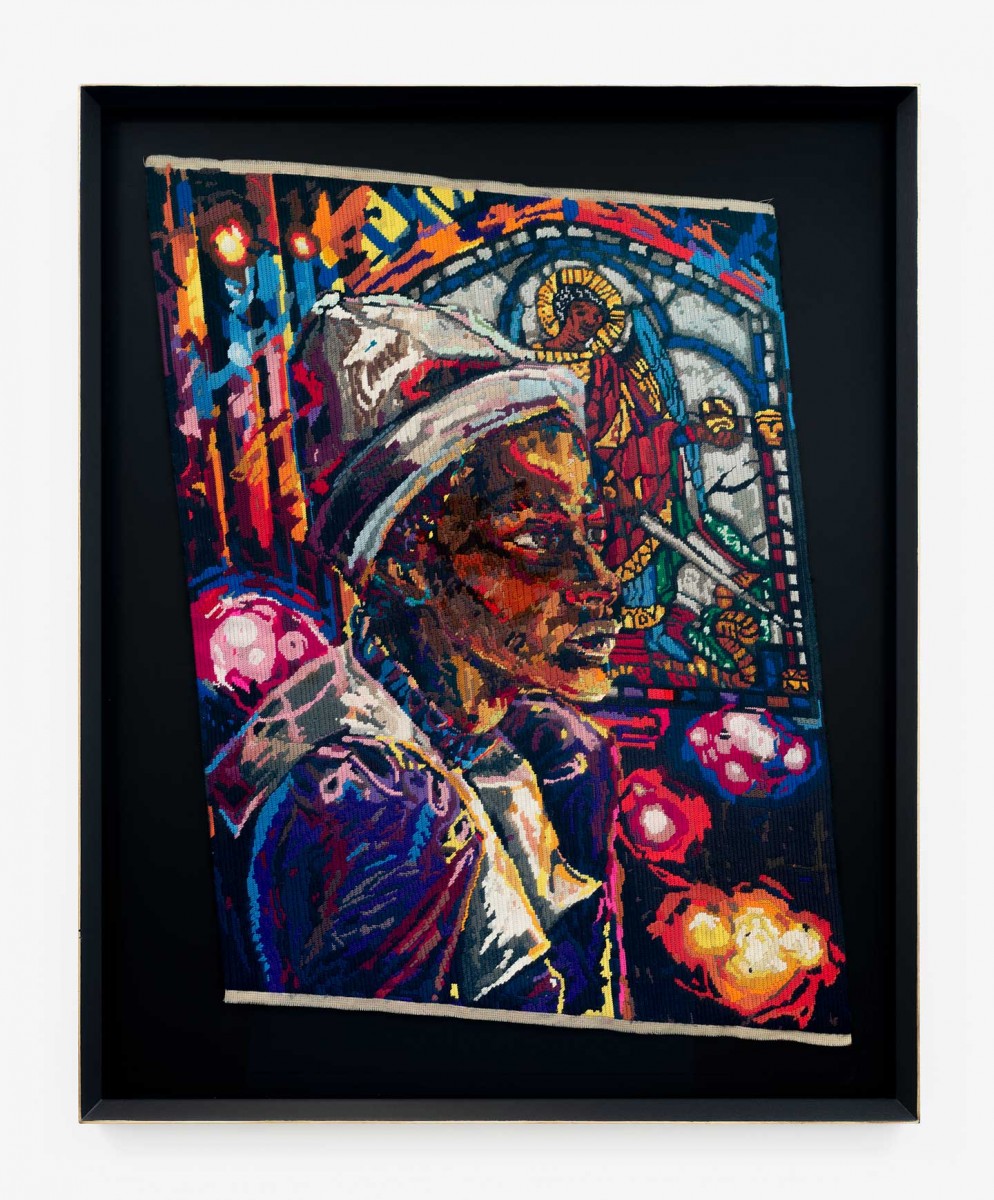 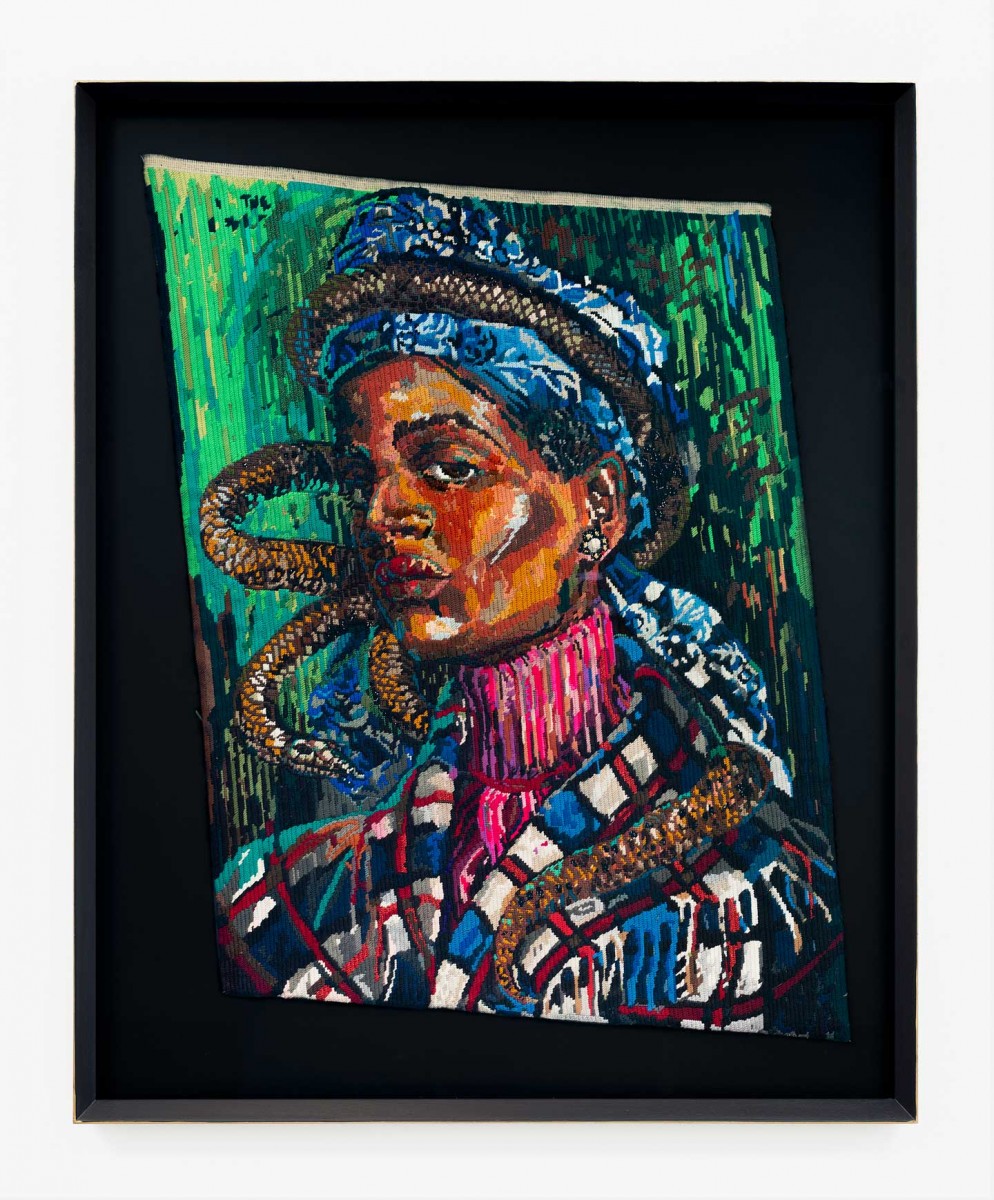 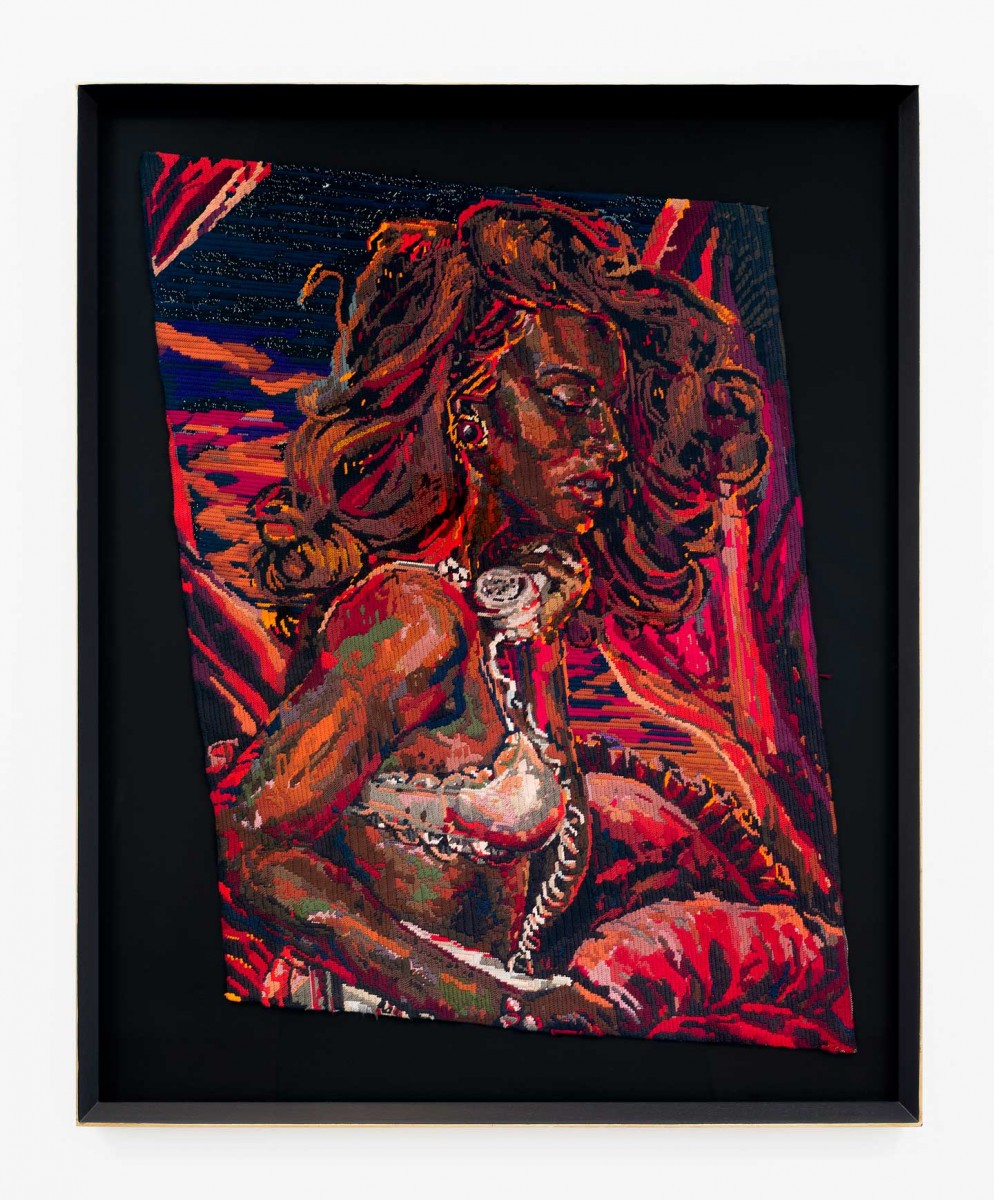 Together with introducing us to two new characters in ‘Dramatis Personae’, Nomalizo and Nestra Brink, seen in the tapestry Clytemnestra, Ruga also takes the viewer on a path into the references that are woven into the saga such as Ancient Greek drama, the histories of the Eastern Cape, Anglican women’s fellowships and Letta Mbulu’s downtempo pop track, Nomalizo.2

The saga in two parts is totally about powerfully centralising the black, queer, femme experience. It follows in Ruga’s style over the last decade and a half of telling disruptive queer stories and this body of work proposes dynamic possibilities for a queer future. Using finely-tunes skills and aesthetics, Ruga deftly weaves nuanced theoretical reflection and multimodal personal storytelling to analyse and perform the mediation of queer subjectivity, affects and histories. Ruga has used his utopia as a lens to process the fraught history of a colonial past, to critique the present and propose a possible humanist vision for the future.

‘Interior/Exterior / Dramatis Personae’is on at Whatiftheworld until 05.09.2020

This article was originally published on ArtThrob