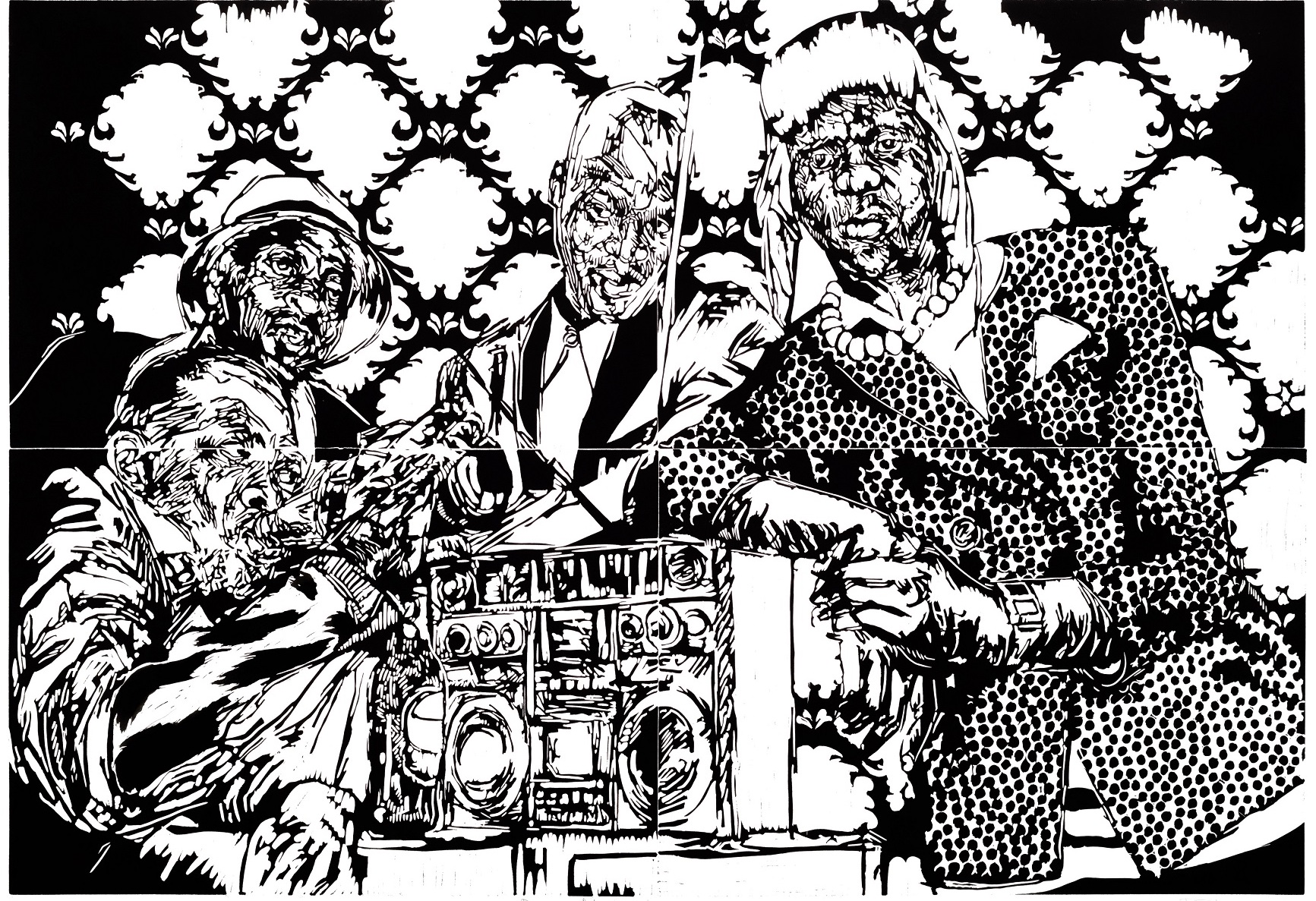 Found in the Charente-Limousine in France, Atelier le Grand Village works to revive the rewarding art of stone lithography through close collaborations with visiting artists. Their latest piece, which premieres here on Latitudes, is a linocut artwork by South African artist Bambo Sibiya.

The medium is familiar ground for Bambo, who worked on large scale linocuts for esteemed artists including William Kentridge, Diane Victor, Norman Catherine and Colbert Mashile while an artist in training in Johannesburg.

It was a certain history of the city that inspired the subject matter he is most well-known for: the Swenkas. In apartheid South Africa, men journeyed from rural areas to the cities in search of work. There they'd buy stylish suits to impress their families and neighbours on trips back home. A sub-culture evolved from these fashion statements and the Swenkas, as they became known, would battle for best outfit in lively competitions.

In 2012, Bambo was awarded the prestigious Gerard Sekoto Award resulting in a residency at Atelier le Grand Village in 2013 where he met founder Francis van der Riet. It was the beginning of an ongoing collaboration.

As Atelier le Grand Village presents the results of their latest undertaking, 'Dear Msakazi', we asked Francis to let us know more about the making of this work. 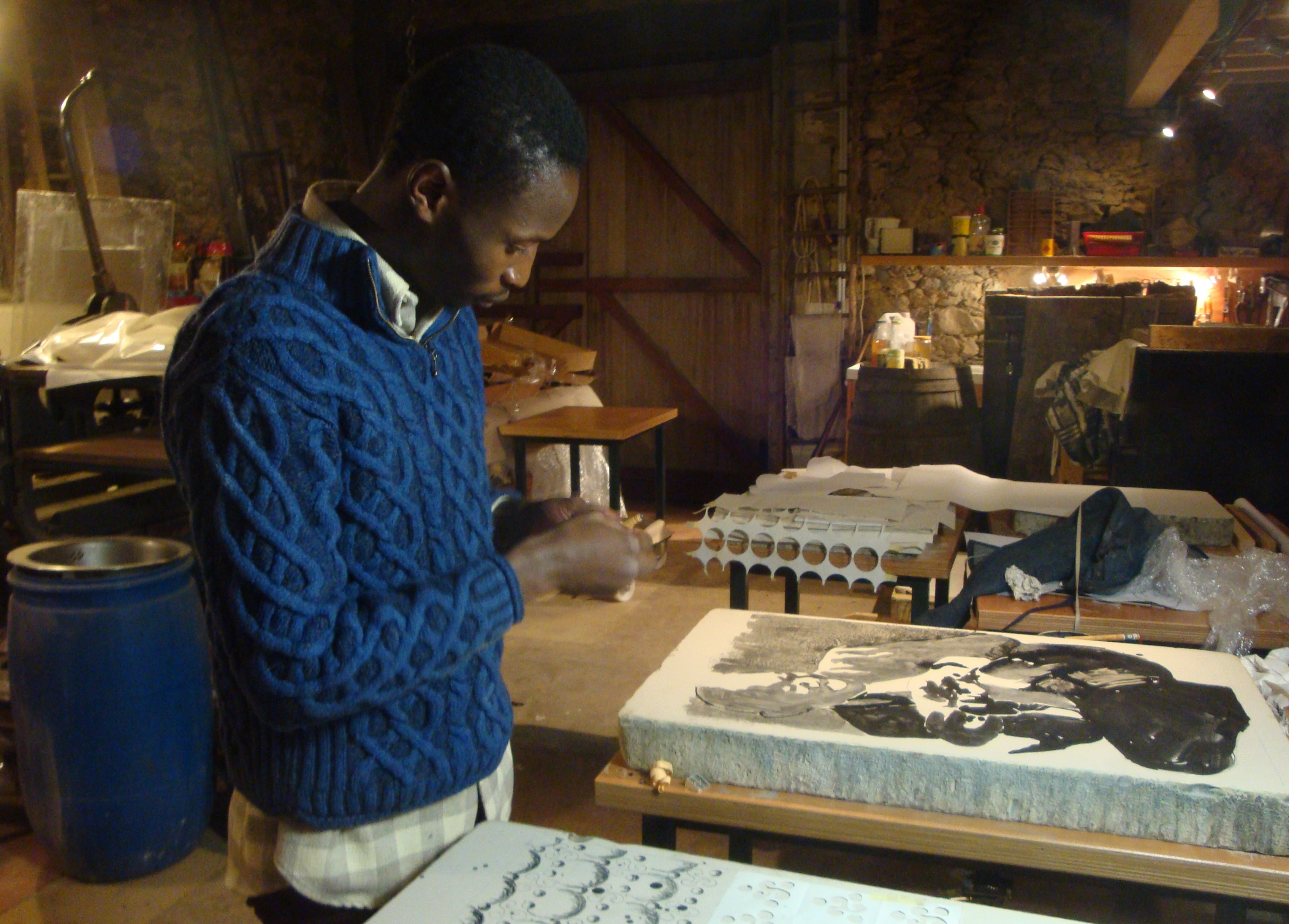 How did you discover the work of Bambo Sibiya and how did the collaboration come about?

I met Bambo Sibiya at the Cité des Arts in Paris in 2013. He was on residency there after having won the Gerard Sekoto Prize in South Africa. I was interested in his work since he was a printmaker. We are a stone lithography studio and I discovered that he was not familiar with the technique. I suggested we work together and that is how it all started. We started work on a series of four stone lithographs. Since then, Bambo has been a regular visitor to our studio and we still work together to this day. To date we have created fifteen stone lithographs editions together. We are currently working on a new one which we hope to release later this year.

What is it about his work that lends itself to printmaking?

When I first met Bambo, he was working a lot with lino and in black & white. His drawings were graphic. His first visit to Paris (and to our studio) encouraged him to explore colour. The size of the stones encouraged him to loosen up as did the new medium. This is very visible in the first series of Swenka lithographs (‘Swenka à Paris’ is a good example). In fact when he returned to South Africa he started working on his large fomat colour paintings. I think working on the stones contributed to that shift. Drawing on the stone is an unforgiving process. It is difficult to erase and redraw. So either one’s drawing has to be very precise, or loose. Bambo managed this looser approach with a lot of success in his first series of Swenkas. The looser marks encouraged Bambo to try the same thing on a lino, resulting in ‘Dear Msakazi’. We decided not only to create stone lithographs but to create large format linos additionally. ‘Dear Msakazi’ is the fruit of that collaboration. 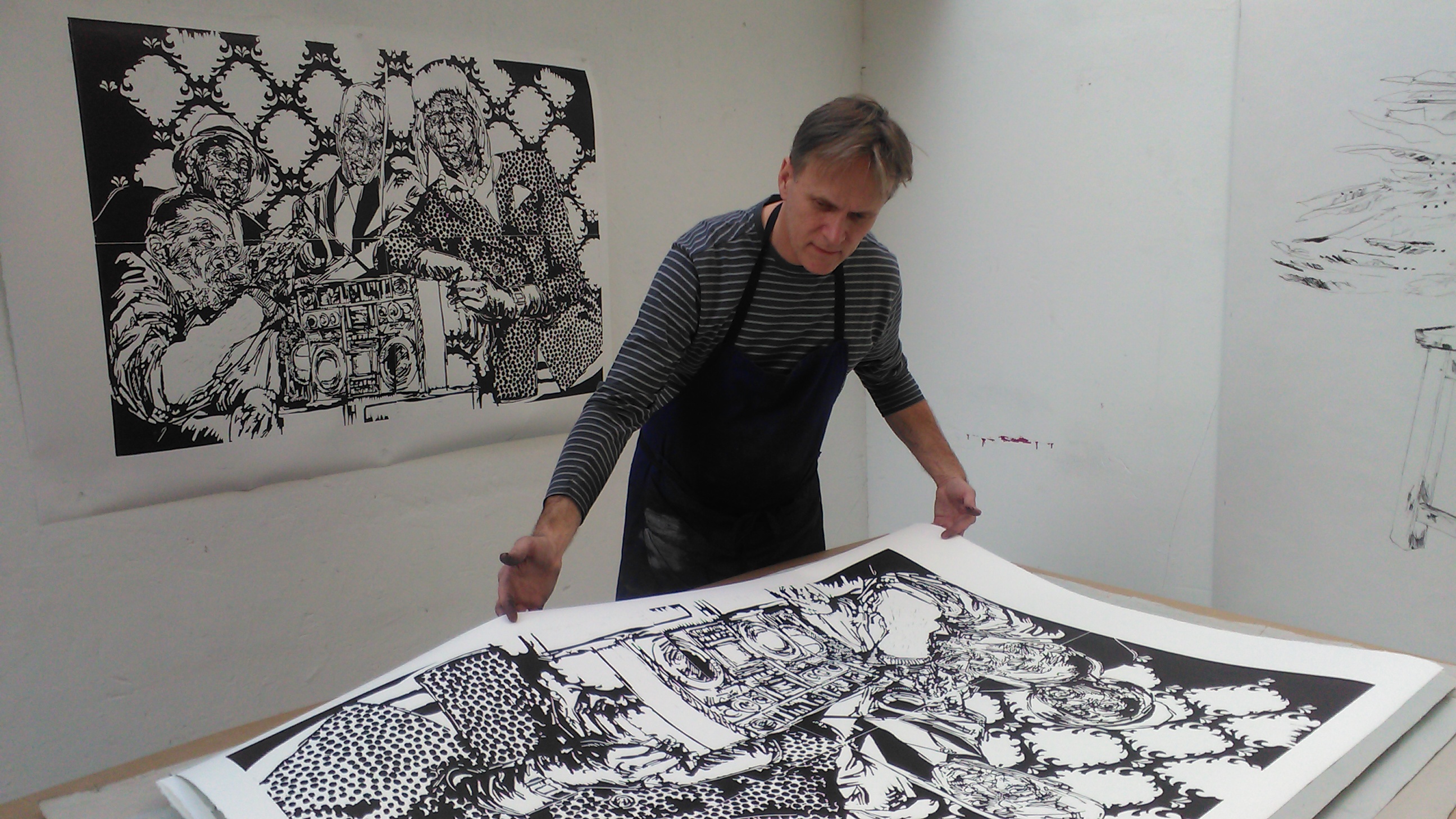 Francis checking the lino after printing it.

Where was the artwork made?
The artwork was created at Atelier le Grand Village in the south west of France where artists from the African continent come to work and revive the art of stone lithography. Artists enjoy working at the Atelier, collaborating, sharing and exploring diverse techniques from the rich experiences encountered here. Handmade stone lithographs are made using French presses dating from the 1860s. Other techniques are also integrated using monotype, lino gravure and photo plate lithography. The stone lithography process is the favoured technique at the Atelier as it respects most the quality and sensitivity of the artist’s drawing. The Atelier has worked with a selection of artists, mostly young South Africans who have won the Gerard Sekoto Prize and who came to France on residency at the Cité International des Arts in Paris. As well as Bambo, artists from Southern Africa that have worked at the studio include Mongezi Ncaphayi, Banele Khoza, Hanneke Benadé and Diane Victor. We have also worked with the Kenyan artist Evans Mbugua  All editions produced at the studio are registered with the Bibliothèque Nationale de France.

Get a behind-the-scenes look at the Atelier le Grand Village on Instagram. 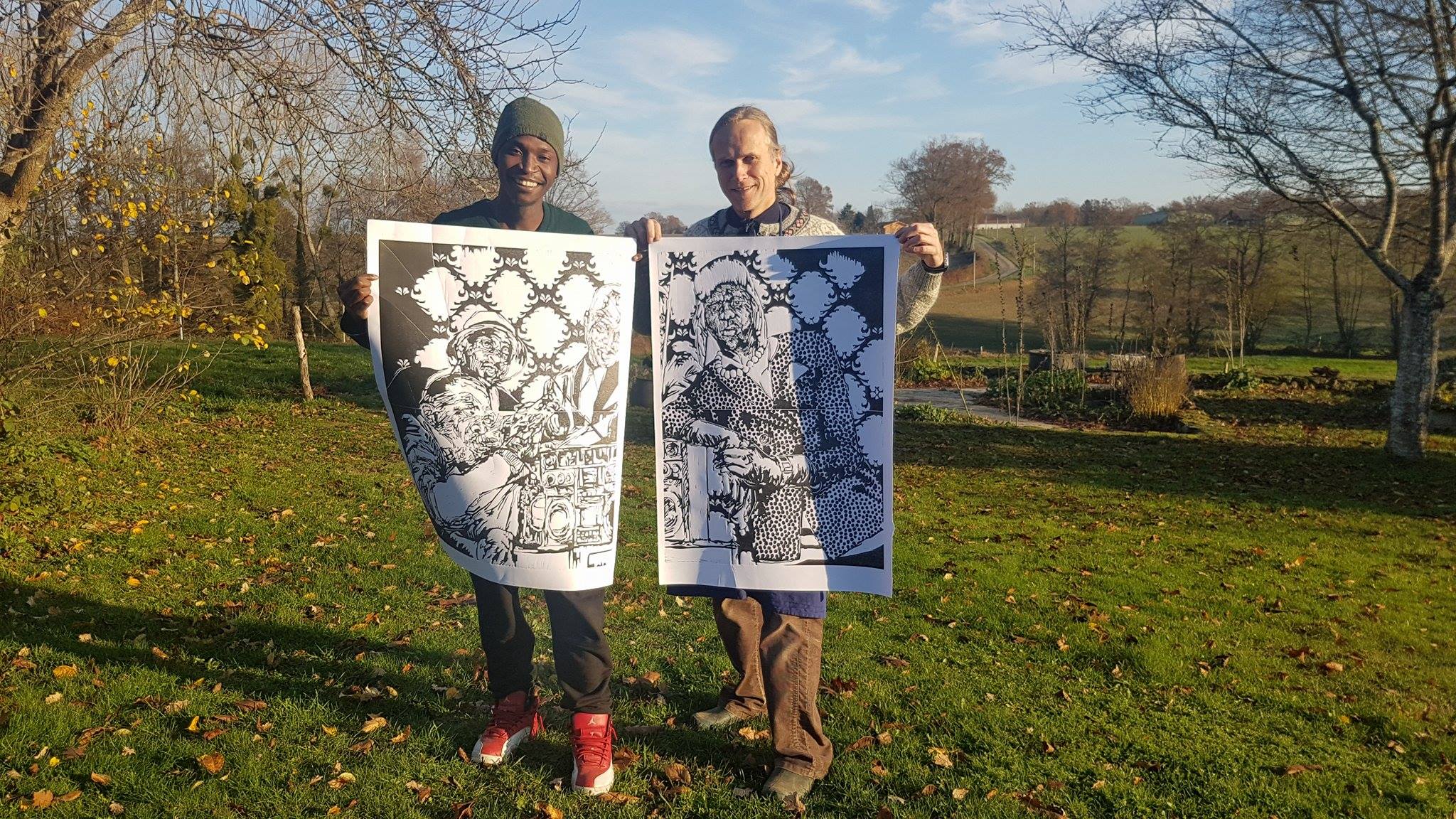 Francis answered our questions together with artist and printmaker Niall Bingham.