AN ENCLOSURE AND AN OPENING: JEANNE GAIGHER'S 'TANGO'

An interior is a place that keeps the people inside safe from rain, wind, sunstroke, heatwave, wild animals, other people, and various threats of other kinds. 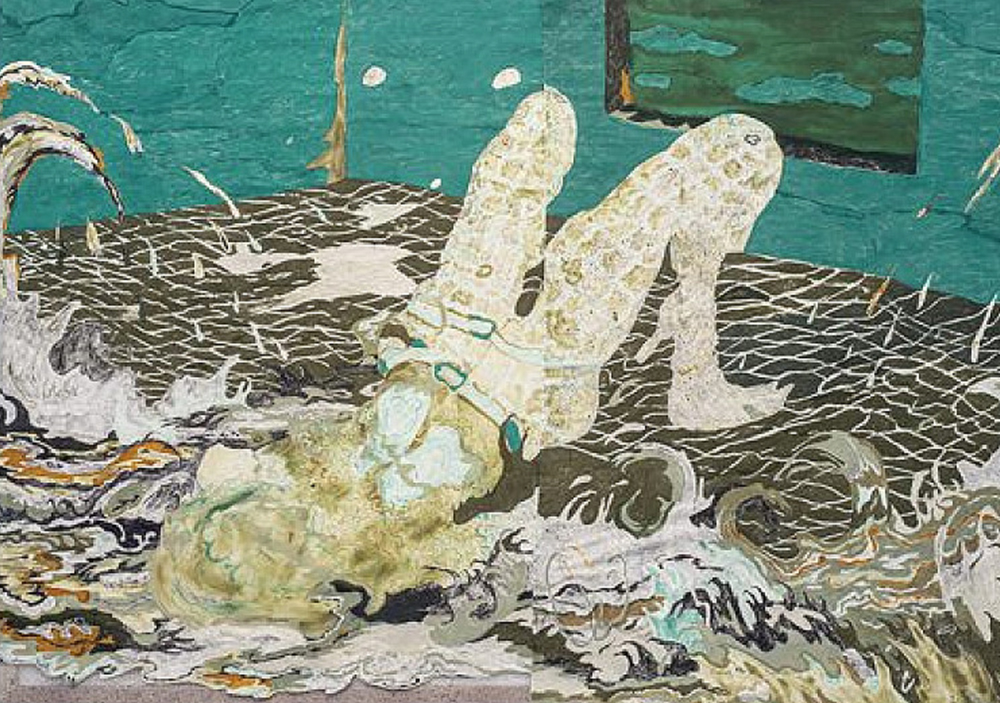 An interior is a place that keeps the people inside safe from rain, wind, sunstroke, heatwave, wild animals, other people, and various threats of other kinds. It is, at least in the West, a sort of box, comprising a floor, a ceiling, four walls, at least one threshold, and objects that function, entertain or adorn. Interiors are sometimes equipped with emergency buttons, surveillance cameras, and burglar bars. This is to protect the people and the objects inside them, if not the very idea of interiority, the dialectic between inside (control) and outside (wilderness). The genre of painting called interior emerged when the bourgeoisie of 17th century Europe wanted to show off and preserve their interiors for posterity, a somewhat extreme method of exerting control over wilderness. An interior is also a psychic state. 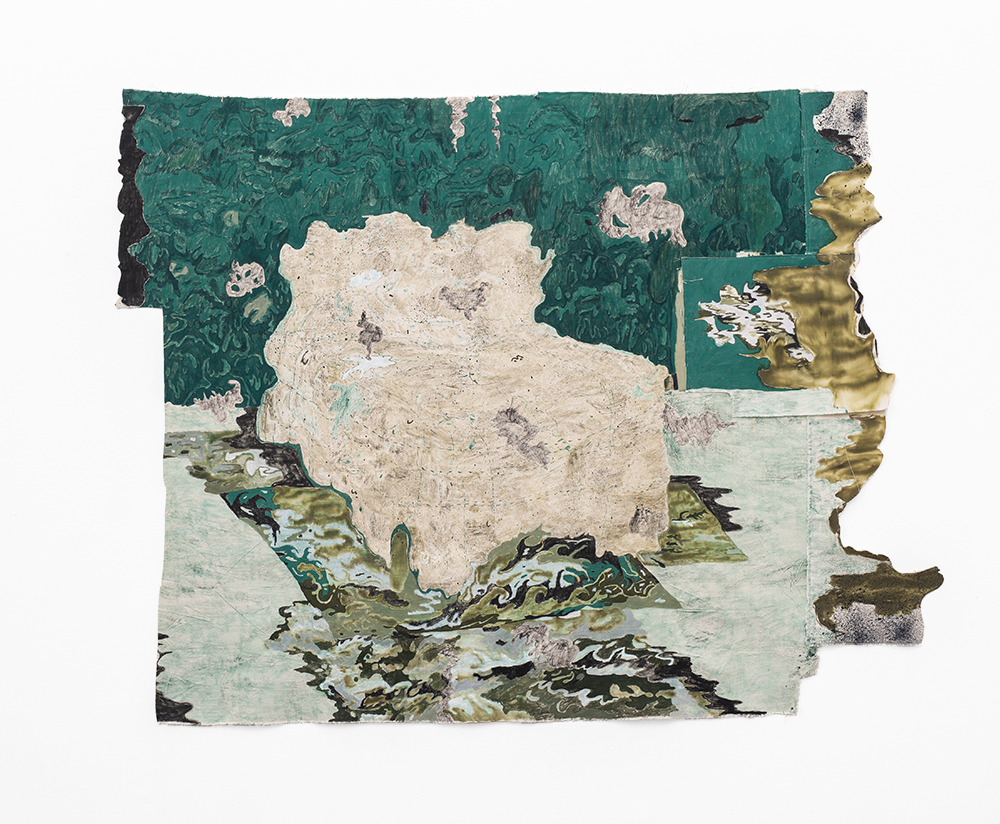 Jeanne Gaigher’s ‘tango’ is about what happens when the proximity between these two interiors – room and mind – results in such pressure as to render them indistinguishable. Take, for instance, her painting low frequency. In it, we recognise a bedroom – rug, headboard, duvet – but the room is all wrong. The edges of the once square and steady bed have furrowed. The floor has taken on the colour and logic of a river. Strange clouds, like smoke, or ghosts, flit in the air.

It is not unlike the way my own bedroom feels after nearly a year confined inside it. A general woundedness hums at a low frequency, commiserates with the colours around me, and leaves me wounded. Clarity ripples and disappears inside a soup of memories. Objects reflect my projections and begin, as in the beauty-beast folktale, to take on a life of their own.

On the wall opposite this painting, another bedroom, called vinegar. The person who sleeps here has fermented beneath the covers; the covers have dissolved to water. The bed itself has erupted into tears. 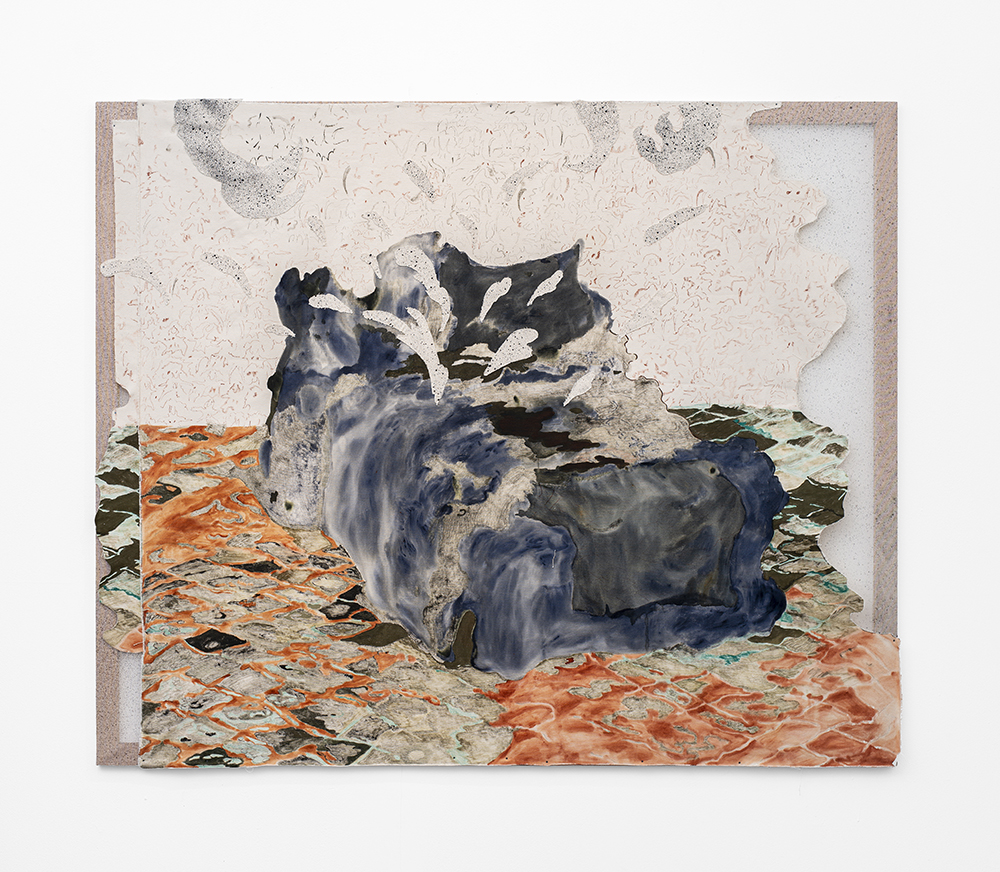 Jeanne Gaigher, vinegar, 2020. Acrylic and Ink on Canvas and Scrim

‘tango’ as a show about the fungibility of interiors is also about what happens when the interior becomes a wilderness. This is a well-known tactic of the haunted house genre. The house is no longer safe; the house itself is wild. Typically, this is as a result of some trauma – murder, suicide, accidental death – as if a room could hold trauma in the same way bodies do. The past is never past. At any moment it can spring upon the present and cause ruin.

Whereas trauma in a haunted house story is specific, in Gaigher’s work, what haunts is hard to pin down. There is reverb but no gesture. Bodies but no people. Not a torment on the mind, but a torment of the mind. Haunting in Gaigher’s work is nonspecific because it comes from a wilderness inside.

Depression is what arises when a haunting, or a chorus of hauntings, becomes too much for the body to bear. It is a common misconception to think of depression as a pause. It is, in fact, a climax so thunderous it eclipses all life’s other goings-on. It is this climax which leads one to seek out some stillness, however binding, to feel through the crescendo. Akin to Book 12 of the Odyssey when Odysseus ties himself to a mast as they sail past the sirens. (Another misconception: sirens represent desire. They do not. They are creatures that despair). 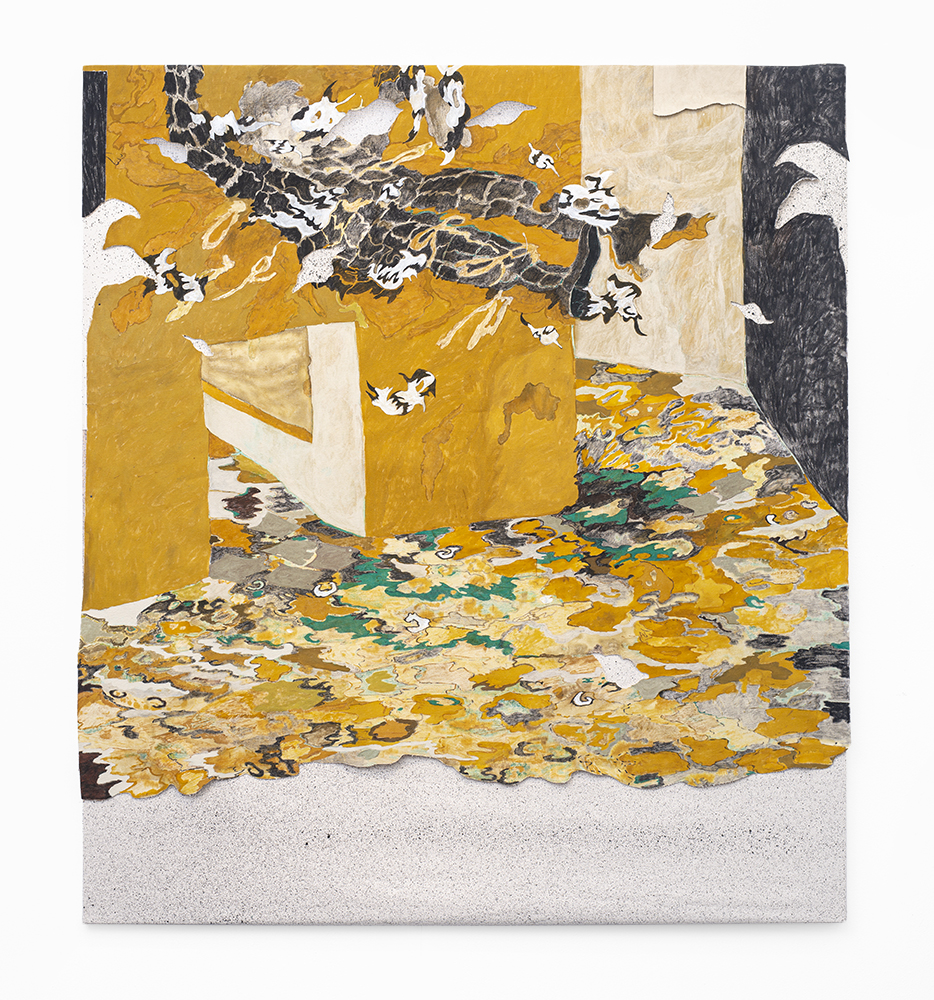 Jeanne Gaigher, are we friends again, 2020. Acrylic ink on canvas and scrim

Seeking stillness, one might find oneself in bed for days, weeks, months. Sometimes the bed is too much – alive, as it can be, with too many associations – and the body takes to the floor. All of the figures in Gaigher’s show are on the floor. One is kneeling in kneel. One is lying still in and stillness. One is lying with their hips tilted towards an open window in locust. Two others, in gargled roots and ankle point, appear to have tripped over their boots and fallen down. What binds them together is a stillness which is not still, or a body which will not cooperate with stillness.

In 1951, John Cage arranged to visit the acoustic laboratory at Harvard University in order to experience the world’s stillest place. After entering its soundproof anechoic chamber, all he could hear or think about was the thundering of his own body. Gaigher’s cocoon paintings visualise this sensation, where the body becomes suddenly aware of itself – breath, ribs, heart, blood – and the self dissipates. This feeling is so on the threshold between terror and relief that it is in stillness we are probably at our closest to death. Hence why, in yoga, lying still on the floor is called corpse pose. It is, ironically, or perhaps consequentially, our most healing posture. Gaigher lingers here.

Similar to Gaigher’s fascination with the floor is her use of the corner. Many interior paintings have them – they trick the eye into perceiving depth – but Gaigher’s corners draw attention to themselves. In vinegar 2, the eye is pulled towards a blood-red corner on an otherwise mossy-green wall. In footnote 1, a bright blue corner strikes through ripples. are we friends again? is a painting with at least seven corners, not counting the corners of the canvas itself.

As a metaphor, the corner is the place where time and space converge to explode the self. This is why the expression ‘to be put in a corner’ conveys a sense of powerlessness. So too why we might find ourselves physically in corners when we are at our most despondent, delirious, or disassociated. The corner, inversely, is also where the self is collected and redeemed; ‘to turn a corner’ is to recover. The corner is where the self breaks down, regathers, and goes back out into the world.

Corners are lovely in this way. They trap us and then turn us around. That’s why painting is so enamoured with them. Even the most pared-down of abstract painters – Rauschenberg, Twombly – could not resist the allure of a four-cornered canvas, which is the allure of the bound. Many of the corners on Gaigher’s canvases are left exposed, covered only by a thin scrim screen. This gives the effect of a corner that Anne Carson might call ‘just enough boundary to the unbounded to suggest the beginning of real terror.’

Two large swathes of these scrim screens hang in the middle of the gallery. To gaze through them is to gaze through gauze. It is like looking through fog, or memory, or bad signal on an old television. It begets haunting imagery and creates the sense that one is moving through the gallery, the world, as if already distanced from it.

A screen is a contronym, meaning both a word and its opposite. In this case, to reveal and to obscure. The screens which Gaigher has installed in her exhibition serve a dual function of crux and interruption, whereby the crux of the show is its interruption. The wall, porous as it may be, which comes up against your life and derails you. For many, this wall is called grief. Totally without substance and nonviolent in nature, grief nevertheless can ravage a person, a home, a community. Illness is another, which is tied to grief.

Despite illness and grief being the refrain of our times, it seems we still find ourselves averse to interruption. God help those at whom the sirens scream: get out of bed, off the floor, out of the corner; there is a world of wires to cross, untruths to answer, screens to fill with faces. Visiting Gaigher’s exhibition, I got the sense that opportunities to be haunted, to be disturbed, to be wracked and undone by grief, longing, and fear – which is the only we find our way back to ourselves and each other – were becoming fewer and farther between, replaced by assurance and inertia of the next-thing.

An interior is also a contronym: an enclosure and an opening. These paintings wrapped me in an opening and let me ache.

This article was first published in ArtThrob

A review by Keely Shinners for ArtThrob