Also known as Ndebele Superhero, artist Zana Masombuka talks about the making of Umseme Uyakhuluma with a power team of women. 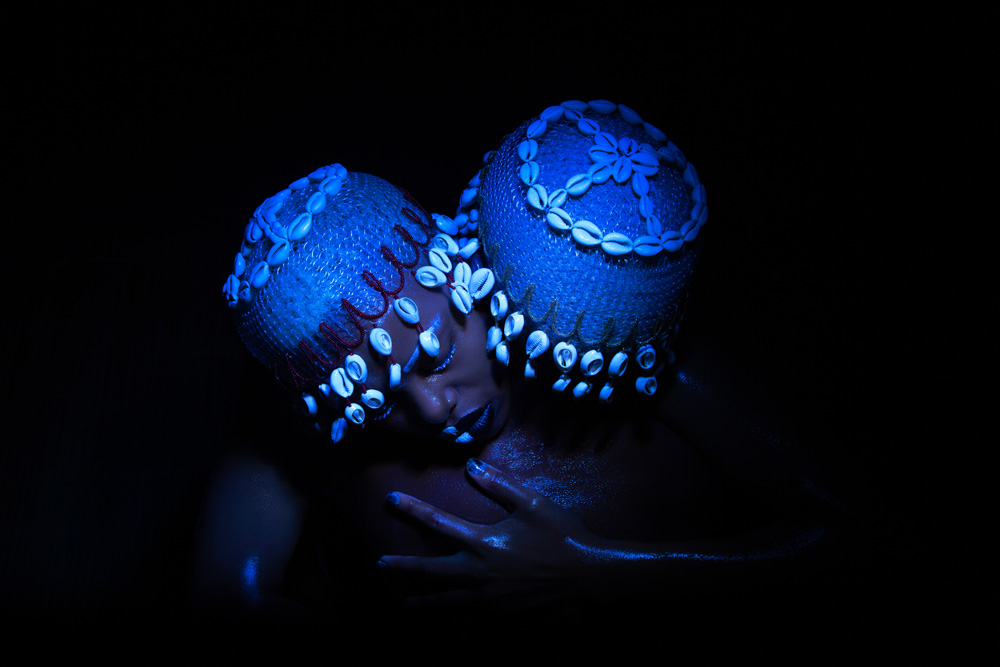 Zana Masombuka also goes by ‘Ndebele Superhero’ and her quest is to amplify representation and African storytelling through her artistic practice. As an artist and a creative director, she makes work inspired by the cultural heritage of her past and imagines shining African futures.

Dressed in striking costumes (often inspired by Ndebele traditional dress), make-up, masks and other adornment, Zana performs and poses for the camera to create collaborative, conceptual photo series. Various props are used as cultural symbols throughout her work.

Much of Zana’s work references identity. While she tries on different identities in her artworks through dress, she aims to speak about self beyond the physical, exploring the potential of our inner worlds.

Coming soon to Latitudes, Umseme Uyakhuluma is the latest project she's involved in which is a collaboration led by an all-women team from South Africa to Côte d'Ivoire. The project, consisting of performance, video and photography, aims to highlight the importance of African stories being shared by African voices and making room within that space for experimentation, mysticism and magic realism.

The core team is made up of Lafalaise Dion (producer, costume designer and actress) whose work with cowrie shells has been incorporated symbolically into the project (you would've previously seen her work in Beyonce's 'Black is King' and 'Spirit'); Tsholofelo Maseko (producer, art director and actress) a familiar face from integral South African television shows and films; Mapula Lehong (sound designer and editor), a SAFTA award-winning sound designer and multi-hyphenate whose poetry features in Zanele Muholi's SomnyamaNgonyama, Hail the Dark Lioness; Boiphelo Khunou (videographer) a multidisciplinary artist and founder of archival platform BOTAKI KE BOTSHELO which merges education and curation of creativity from Africa; and Bontle Juku (photographer), a visual artist and conceptual photographer whose work explores narratives and sociopolitical discourse surrounding the Black body. She was one of Design Indaba's Emerging Creatives in 2020. Including Zana (producer, conceptual director, art director and actress), the core team were supported by a larger cast and crew of women of all ages.

The short art film and series of photographs follow two artists played by Zana and Tsholofelo who answer a calling to create art that has been silenced in their bloodline for centuries which leads them on a journey through different states of consciousness.

A selection of photographs will be released on Latitudes. Ahead of this, we asked Zana about the making of Umseme Uyakhuluma. Here, she answers on behalf of the extended team of women.

What is the significance of an all-women team for this project?

The significance of having an all African women crew was extremely important to us, because we felt that we wanted to tell our own stories, in our own voices. Most of our film is self-funded, so we wanted the freedom to play and experiment with no inhibitions. We wanted our set to be a safe space for BEING and experimentation. We didn’t want to follow the model that had been set before, because it felt more natural to do something that was more freeing this way, with no expectations other than the process of exploration and experimentation.

Where did you shoot, can you tell us a bit about the location?

We shot in various locations in the beautiful KwaNdebele. The reason we chose this location is because it had everything we were looking for. Secondly, it had a huge significance for the two main characters in the story, namely myself and Tsholo, as we both come from and grew up in the area.

What were the challenges you had to overcome in making this work?

There were many challenges that we were faced with at different points of production. The main challenge was finding a balance between the intuitive approach of making work, which can get chaotic at times, and having a more structured approach which can be very limiting creatively at times.

Who are the characters in the film and photographs and what do they represent?

The characters are two artists who have received a celestial call, through which they find their awakening and reckon with the idea of "home", going beyond the house structure, and seeing all of nature, the lands and the waters as their home too, at a more awakened plane of existence. They represent duality which is often present in the exploration of our own existence when we try to find meaning of our individual earth experience and not sometimes seeing our connection to everything else. They are us and we are them, searching and exploring. The question they pose throughout the project to the audience is whether they are awake to their own contradictions in the pursuit of a deeper connection.

Why is this an important story to tell now?

I think it is important to tell the story now, because we are living in a very important time on the continent. One might call it the African Renaissance. There is so much creativity exploding everywhere on the continent. It feels like an ancestral portal opening of some sort, where we are all hungry for something new, different and something that reflects our experiences as well as our imagination. Therefore there can be no African Renaissance without prioritising the voices of previously marginalised groups of the continent; and one such voice is that of African women.

Who do you want to reach with this work?

We want the work to reach everyone and anyone exploring a different way of BEING, that doesn’t necessarily fit the mould that has been previously set out. We want the story to reach little African girls and boys who grew up in different villages and communities across the continent and her diaspora, to know that their metaphysical/celestial experiences are just as real and valid. We want the story to reach anyone who is on a quest of questioning the norm and is open to experiences and experimentation that is deeply intuitive and goes beyond the physical terrain we operate on. We want the story to connect and resonate with those who have had and will have varied celestial conversations and experiences that manifest as different things for different people, so they can lead with abundant openness and freedom.