All of us are in some kind of trouble, and, recently, we’ve all been in the same kind of trouble. We are perhaps not ‘completely ruined’, but there are indications of global anxiety about just a handful of loaded topics that affect us all. 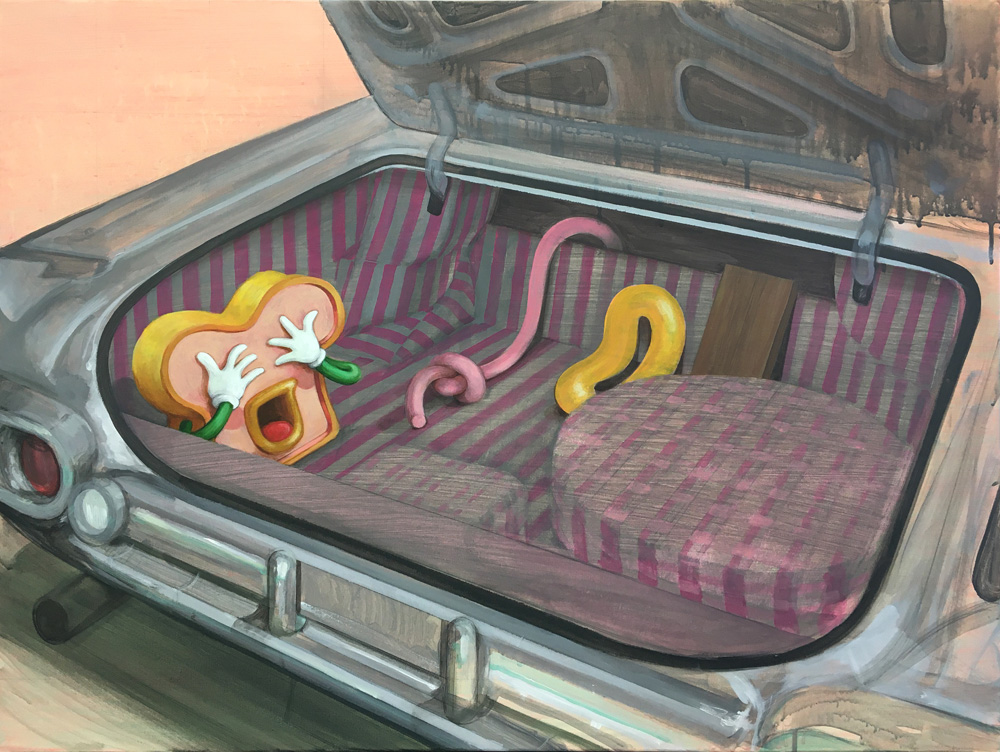 An artwork is generally published with a title, a date, a size and a price. There’ll be some information about what it was made with: crayon, oils, concrete, and if there’s a signature there’ll be directions to find it: front bottom left. But we’re curious to know more. So much of art is left to interpretation but what did the artist intend to say? What value lies in the many sketches and practice rounds they did to reach the final product? And what was happening in the world when they made it?

Introducing Behind the Artwork where we zoom in on one artwork and ask the fundamental questions: who, what, when, where and how.

First up is Wim Legrand and his piece ‘We’re Toast!’ made when it felt like the world was shutting down. In it a piece of toast acknowledges a universal feeling and adds a pinch of humour to our soupy dread. It was part of his recent solo show, The Parafix, at 99 Loop Gallery.

Wim Legrand (Cape Town) was born in Belgium in 1978. After completing his studies in Visual Arts in 2000, he honed his skills as a master printmaker at a prominent international centre for the graphic arts. His career as a painter has steadily advanced in parallel. He combines painting with drawing, cartoons and pop culture with aesthetic references to North European history painting and Surrealist traditions. His work offers a playful take on the paradoxical strangeness of everyday reality, while commenting on our postmodern condition as victims to the barrage of information and news feeds. 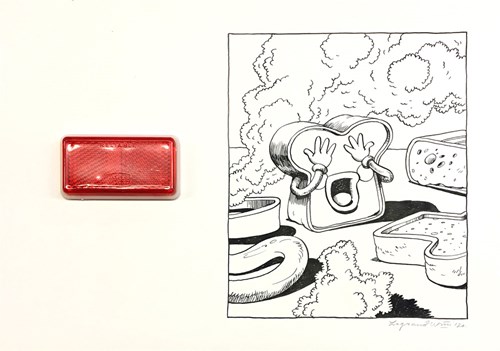 "I work on the same characters in different media, at the same time. While painting, I was refining drawings in pen and ink, producing a series of prints, and developing the toast as a lapel pin."

Let’s talk concept. What is 'We're toast!’ about?

The artwork takes its title from the colloquial expression ‘We’re toast’, as in, ‘to be in a lot of trouble or completely ruined’.

All of us are in some kind of trouble, and, recently, we’ve all been in the same kind of trouble. We are perhaps not ‘completely ruined’, but there are indications of global anxiety about just a handful of loaded topics that affect us all.

The protagonist – an open-mouthed slice of toast covering his eyes with his large cartoon hands – was designed as a symbol, an emoji almost, for a very specific feeling that became familiar to most of us recently. It’s a feeling of fear and anxiety combined with denial, disbelief and a huge desire to rather avoid the reality.

It’s a psychology that relates to other works I’ve made in the past, which deal with the idea of ‘victimhood’ in the broadest sense – in that everyone feels, at certain times, as if they are victims of something. This experience ranges (almost obscenely) from being a ‘fashion-victim’ or experiencing FOMO, to being victims in a war zone, of domestic violence, or of the time we live in.

The setting of a car boot is a cinematographic reference. Everyone remembers some scene in a movie where a victim is thrown into the boot of the car, left with the hope of escape or discovery by someone who might open the boot later. In my painting, the car boot isn’t closed: the scene is open-ended. There are props such as a lifebelt, a rope, a piece of wood and a spare wheel. The question remains: Will we recognise the props as aids for escape, or will we keep our eyes covered?

I use the visual language of cartoons in my work because I feel it is a language that is understood across the world, one that doesn’t need words to express meaning and one that bridges cultures too.

I made the painting after the first lockdown during the ongoing pandemic. The character came to be sometime during the first weeks of Lockdown Level 5, as a small sketch in a sketchbook. It happened almost accidentally when I was working on some other drawings in preparation for my solo.

I have a studio space in Paarden Eiland, an industrial area in Cape Town, where I produced the paintings as well as the drawings and sculptures. It is a small room with access to a multi-purpose workshop. The room is filled with soft sculpture versions I made of the characters, based on drawings and paintings. There are also different objects that inspire me, some older works and always a bunch of things in progress. In the picture, on the left you can see the slice of toast in an early stage.

I always start from sketches and drawings – notes of ideas, experiences and interpretations of what I perceive daily. The majority of drawings are inspired by everyday objects and the visual language I developed from sampling memories of cartoons from my childhood. Also, most of the time, I draw from the Northern European tradition of landscape painting as a reference or inspiration for my paintings. I especially like the distorted sense of scale in those paintings, which focus on how majestic nature is.

In this painting, I used a photographic vintage car reference for the scene. The car boot is the environment and is more of an impression, with very minimal, loose brushstrokes. The inside of the boot is more detailed and is separated from the exterior by a clear outline. It’s all intended to set the right atmosphere and construct a stage for the narrative.

I work in acrylic, which forces me to paint fast because of the drying time. Layering is essential in the process – not just practically, but also in the construction of the concept. I am always looking for a balance between an image that evokes a sense of familiarity, something you think you might have seen before, and just the right amount of ‘What the hell am I looking at?’

I work on the same characters in different media, at the same time. While painting, I was refining drawings in pen and ink, producing a series of prints, and developing the toast as a lapel pin. I made a larger-scale soft sculpture to investigate the character’s presence in the real world. The various processes help to mature the ideas. 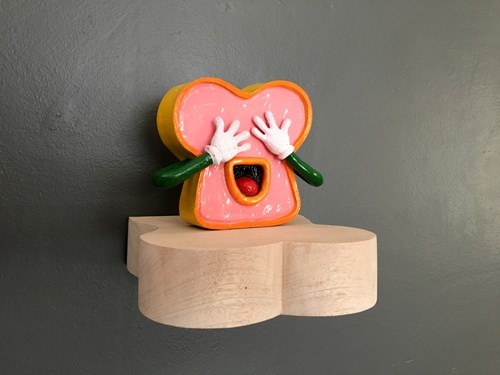 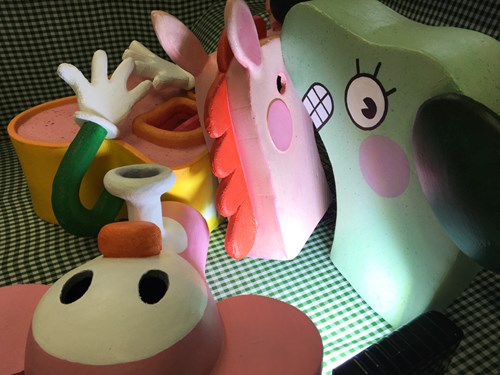